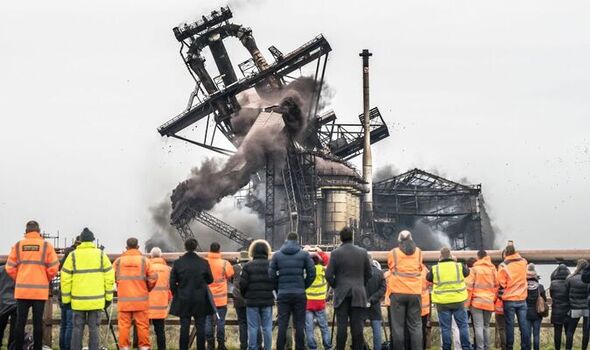 The removal of the 1970s-built structure yesterday is the latest in the site clearance since the works in Redcar, North Yorkshire, closed in 2015 with the loss of thousands of jobs. Crowds gathered to watch the furnace crumble, in an explosion heard as far away as Hartlepool, some 23 miles away.

The structure, the same height as St Paul’s Cathedral and the second highest blast furnace in Europe, dominated the skyline in Redcar since 1979.

It was flattened to clear the steelworks site, which Teesside’s Tory mayor Ben Houchen has described as “one of the biggest, most complex and condensed demolition projects ever to take place in the UK”.

The four giant gas stoves which heated the furnace are set to be demolished next month.

Mr Houchen said the clearance, which used 175kg of explosives, is a vital part of regeneration plans.

He said it is earmarked for the Net Zero Teesside project, which will be the UK’s first fully integrated gas-fired power and carbon capture, utilisation and storage project and aims to create thousands of jobs.

Mr Houchen said: “Our skyline has changed forever with the demolition of the blast furnace and we can never forget the important role it played in Teesside’s industrial history.

“A new skyline will emerge as construction ramps up on new investments.

“The steelworks site has shaped our communities, but I’ve always been clear we need to look to the future to create jobs on this site that will employ generations of local people, just as the steelworks once did.”

The blast furnace was mothballed in 2010 but restarted two years later when SSI UK took over. It was shut down for a final time in 2015 when SSI went into liquidation – with the loss of 2,000 jobs.

Redcar’s Tory MP Jacob Young said: “I always said today would be a day of mixed emotions. But the blast furnace should make way for a new era of progress.”