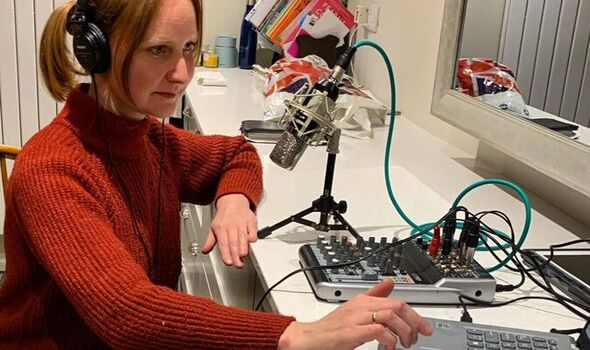 A Ukrainian refugee is hosting a new radio show from her British host family’s kitchen. Hanna Zarytskya, 38, moved to Market Drayton, Shropshire with her 13-year-old son in August after she was forced to flee Vladimir Putin’s barbaric war. Ms Zarytskya, who works as a chief editor and news presenter at a regional radio station in the city of Chernivtsi, told Express.co.uk the opportunity to broadcast to other Ukrainians was a “great gift”.

The mother-of-one said she hoped her show, which is broadcast every Wednesday from 10am-11am on Pure Gold UK, would help to lift spirits and bring positive emotions.

She said: “I see this show more to support Ukrainians who emigrated. But as a small connection with those who stayed at home and Ukraine in general.

“As for the Ukrainians who remained in Ukraine, I will be very happy to bring positive emotions to at least one person, because nowadays Ukrainians live without light, water, heat and the internet for days, and in some places for weeks and months, and over their heads fly deadly missiles.”

It comes as Ukrainians face heavy bombardment from Russia, with scores across the nation left without regular access to electricity and heating during a bleak winter where temperatures could plummet as low as 27F (-33C).

Referring to the desolation at home, Ms Zarytskya said: “I am very happy that, through the radio show, I have the opportunity to support Ukrainians who are in forced emigration and at least lift their spirits a little.”

The journalist, whose husband is still working as a camera operator for the national broadcaster in Ukraine, admitted she was concerned about those she has left behind.

But she was grateful for the welcome and support she had received and wanted to give something back.

She said: “Like all Ukrainians who have gone abroad, I am also deeply saddened and worried about my relatives who have remained in Ukraine.

“But, thanks to the support of sponsors and the Government in general, I adapted to the new conditions. I don’t know when the war will end and I will be able to return home.

“So there is uncertainty that needs to be acknowledged and accepted. And it is also very important to be useful and help others. It always inspires and gives strength to move on.”

More than 100,000 Ukrainians have arrived in the UK since the start of the war under the Government’s sponsorship scheme and 40,000 more came to stay with relatives.

Ms Zarytskya said she believed her show was extremely important for Ukrainians who were forced to leave Ukraine but are spread out across Britain.

She said: “The fact that we were kindly given airplay on the English radio Pure Gold UK is a great gift. The main goal of the show is to support people who are in exile.

“The show features Ukrainian songs that improve mood and it highlights important topics such as adaptation abroad and why it is important not to stress about forced emigration.”

She said: “We wanted to help her connect with all Ukrainians here in the UK and to keep her professional hand in as this was her career in Ukraine and to boost morale for all Ukrainians.”

Mike Smith, station manager at Pure Gold UK, explained he wanted to get Ms Zarytskya back on air so she could make use of her skills and communicate with her own country’s people and also other refugees based in the UK.

He said: “It is great to have her join us, and for Pure Gold UK to help in our small way during this dreadful time.”

Mr Smith, who said the station was currently getting roughly 24,000 listeners hours a month with 15,000 unique listeners, urged Ukrainian people in Britain and overseas to go to the Pure Gold UK website or download the Pure Gold UK app on the App Store.