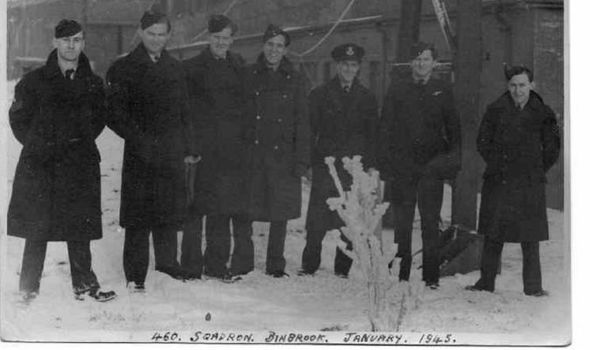 A welder by trade, he fought hard to leave a so-called Reserved Occupation to join the Army on his 18th birthday, in December 1942. But even in uniform, his skills led him on a myriad of soft postings, from working at Woolwich Arsenal to logging the comings and goings of a fleet of Dodge built Army transport and supply lorries, But when the newly-formed Glider Pilot Regiment called for volunteers he knew his moment had come.

“We were part of the Army Air Corps and so we flew and fought – that was the incredible thing,” recalls the 98-year-old from his home in London. Having passed rigorous fitness and flying tests he was finally awarded the special Glider Pilot Regiment wings and posted to No.2 Flight, A Squadron, at RAF Harwell, Oxfordshire. Finally, in September 1944, he was given the green light to go into battle.

“You had to become skilled in keeping your glider as steady as possible in all sorts of cross winds and turbulence so as to stay attached.That’s before you had to potentially encounter hostile enemy action from the ground or in the air,” he said.

“I think strong nerves, good training and confidence in your own ability were the main things required to succeed as a Glider Pilot, and we certainly needed that for what was coming up next, because for us it was time for the real thing. It didn’t come much harder than Arnhem.” Though Frank successfully landed his Horsa glider, the operation – made famous by the film A Bridge Too Far – was to end in failure.

“Once on the ground in Oosterbeek we volunteered for a patrol, and only got about a quarter of a mile before realising we were totally surrounded by Germans.They were coming from everywhere.” Almost out of ammunition, his team laid low in a church for four days to avoid detection.

But their luck ran out when Germans stormed the church and shot their captain in the stomach. “Needing immediate medical attention he rightly gave himself up, and I think out of pure shock, told a German that there were three more British higher up in the roof, so that was it for us,” he said.

“We were captured by the dreaded SS who I must say treated us very fairly, myself included, despite my dog tags indicating my Jewish faith. I read later that this was due in most part because the elite SS units battling against us at Arnhem respected us for the fight we put up and for the tenacious resistance of the British Airborne troops.”

Frank had seen action and survived, but there was suffering to come. In January 1945, with Soviet forces advancing, he was taken out of Stalag Luft 7 at Bankau in Germany and placed on what became infamously known as the “Long March”.

“Around 1,500 of us were made to walk over 80 miles in temperatures well below zero, with the threat that for every man who could not go on five more would be shot,” he said. “Conditions were appalling. People died along the way.”

The 20-day march led him to the Stalag III-A south of Berlin at Luckenwalde, which held prisoners from 14 allied nations. “Some of the Russians were like skeletons, some had been there for years,” he recalled. The advancing Red Army finally arrived and liberated the camp on April 22, 1945, and the next day he was flown home.

Frank was interviewed by historian Gary Bridson-Daley for the second edition of his new book ‘A Debt of Gratitude to The Last Heroes’ (History Press) now available for £12.99.

‘I saw friends go down in flames during ops’

IT was dubbed ‘the last raid’ – a vital gambit to prevent members of the Nazi elite and their fanatical SS guards from making a desperate last-stand in Hitler’s Alpine headquarters. For RAF pilot Les Joy, the Berchtesgaden raid would also mark the tragic end of a personal journey – his last mission with the Australian crew he’d grown to love before a tragic accident killed them.

In the dying days of the Second World War Bomber Command hatched one last operation. With US and British troops advancing on Berlin from the West, and Soviet troops from the east, Allied command feared the inner core of Hitler’s Nazi party would congregate at Berchtesgaden, home not only to Hitler’s famous Eagle’s Nest, but also heavily fortified barracks and brimming with SS soldiers for whom the concept of surrender was anathema.

They had cause to worry. On 21 March, 1945, Chief of the Air Staff General Karl Koller transferred elements of his staff to Berchtesgaden, and a document from the Luftwaffe operations staff advocated the creation of a “final bulwark of fanatical resistance.” An area 400 sq miles was to be sealed off after transferring military supplies and the creation of an industrial plant and even an airfield. Berchtesgaden would be its “nerve centre.”

Allied command was certain of two things: any advantage they may have with air superiority would be lost in the mountains and, as they knew all too well from the Italian campaign, attempts to seize control from the ground would have carried the risk of significant losses.

So it was that on April 25, 1945, 359 Lancasters from 22 squadrons – including the famous 617 Dambusters squadron – were sent to obliterate it. The multinational mission boasted 2,529 crewmen from England, Australia, Rhodesia, Canada, and Poland. Just four months earlier, Les had become one of a handful of Brits to be posted to the Australian 460 squadron.

A picture he still treasures shows him and his crew gathered outside their Lancaster in deep snow. ”They weren’t used to such harsh winters,” recalls the 98-year-old, from his home in Sutton, North Yorkshire. Although a shadow of its former self, the Luftwaffe was still very active over Germany and its night fighter force was equipped with the latest radar-directed technology.

“On one occasion when we were approaching the target area the enemy ground control had directed their night fighters above us and instructed them to release their flares simultaneously above the bomber stream. The flares lit up the whole night sky for miles around, it was like Regent Street at Christmas,” he said. “We knew that only one in four members of aircrew survived a tour of 32 operations but it was something we refused to dwell on.”

Berchtesgaden was the last combat raid. “We were told that there were reportedly top Nazis in the target area and possibly Adolf Hitler himself. We were elated. It’s not every day that you get told you’re being sent on a special mission that might take out Hitler and his cronies,” he said.

In fact, though he was advised to retreat to his Eagle’s Nest from which he could make his way to South America, Hitler had already decided to remain in Berlin. Knowing the Soviets were nearly upon him, he took his own life just five days later, on April 30. But the raid almost killed Hermann Goring.

Hitler’s Reichsmarshal had left the Berlin bunker on April 20 and retreated to his mansion near Berchtesgaden. As the bombs started to fall he was escorted to his castle in Mauterndorf, Austria. Les added: “Hitler wasn’t there but we bombed a very important place that he could have run to and nearly got Goring.”

In July, Les was finally granted his first leave and flew home to spend a few days with his wife, Elsie. It was then, the war won, that tragedy finally struck his crew, as they took part in a bombing exercise on the Lincolnshire coast.

During one of the runs a practice bomb had exploded in the bomb bay. The Lancaster immediately caught fire, resulting in the deaths of four out of six crew members on board. “It was the most awful end to our crew. I returned from leave to find none of my colleagues around and all my kit and possessions gone. It was very traumatic.”

He added: “Remembrance is vital, every branch of service has lost many good people in all conflicts. During the Second World War we had a terrible attrition rate with 55,573 killed. Some – friends from my squadron – I saw going down in flames during ops. Terrible. We must remember them.”

Les was interviewed by historian Gary Bridson-Daley for the second edition of his new book ‘A Debt of Gratitude to The Last Heroes’ (History Press) now available for £12.99.