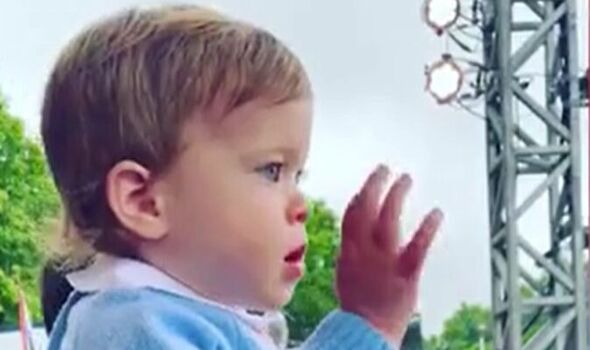 The one-year-old son of Eugenie and husband Jack Brooksbank looked to be having the time of his life as he joined other members of the royal family at the Platinum Jubilee Pageant on Sunday.

A video posted on Princess Eugenie’s Instagram page showed the youngster waving happily at the crowd as he joined other royals in the stands outside Buckingham Palace.

August, who was dressed in a blue knit jumper with a union jack, was seen clapping his hands and pointing at the procession as it took place in front of him.

The outing marked his first appearance at a formal engagement with the Royal Family.

Princess Eugenie shared a number of snaps from the occasion alongside the video of August.

She wrote: “The Platinum Jubilee Pageant was just incredible. To all the people that took part, organised it, made it flawless for us all watching, THANK YOU. You made us all so proud.”

Royal fans were delighted to see August enjoying the celebrations.

One Instagram user, @Harry_Meghan_daily, said: “Looks just like you Eugenie but also reminds me of Harry and Archie in a weird way.”

Another commented: “So wonderful to actually see August’s face. What a sweetheart he is.”

A number of royal fans said little August was “the image” of Princess Eugenie when she was a baby.

The family were joined in the Royal Box by a number of senior royals including Prince William and Kate Middleton and their three children, Prince George, 8, Princess Charlotte, 7, and four-year-old Prince Louis.

Prince Charles and the Duchess of Cornwall were sat nearby, as were Zara and Mike Tindall with their eight-year-old daughter Mia.