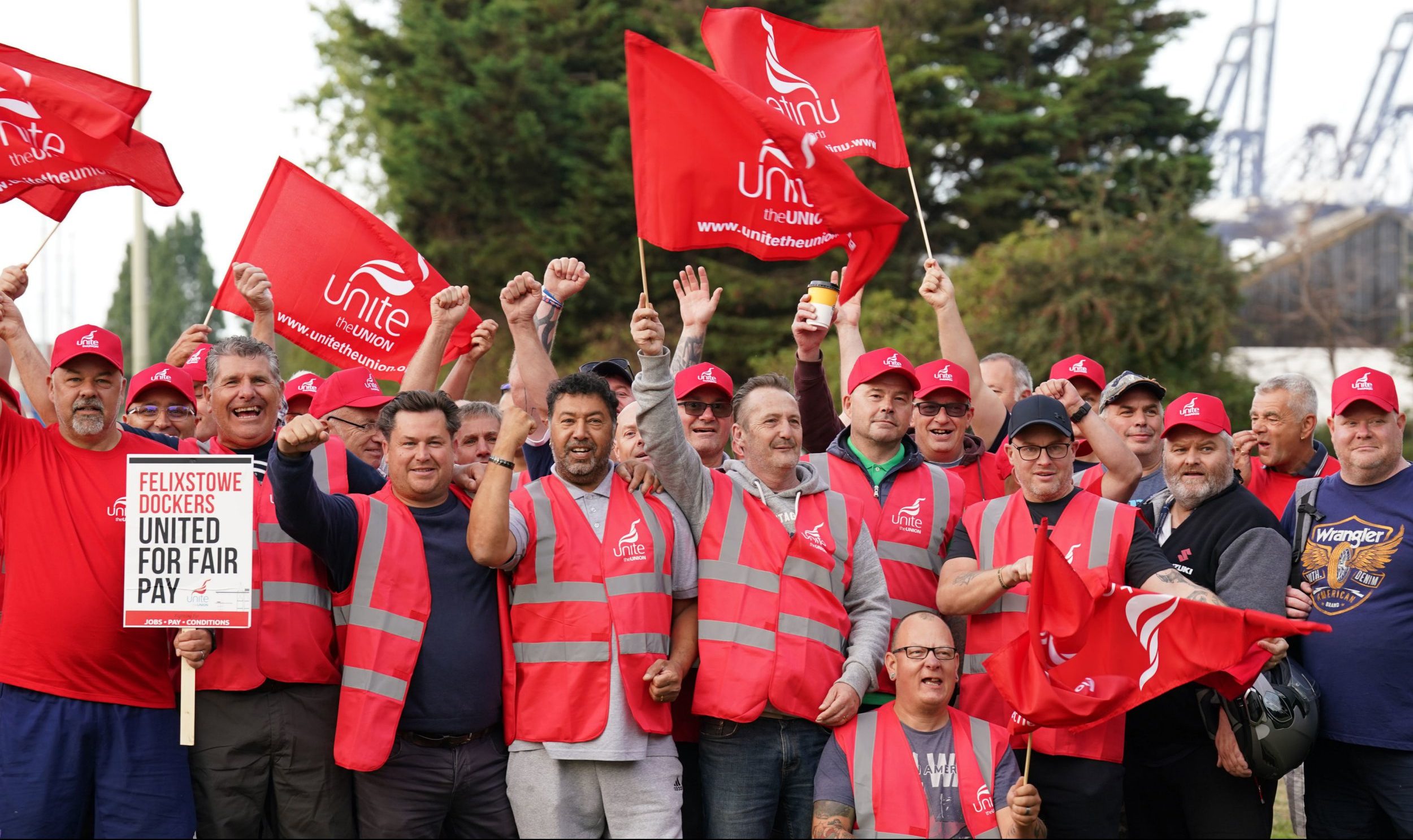 The first of an eight-day workers strike at the UK’s biggest container port has begun this morning.

Around 1,900 Unite members at Felixstowe, including crane drivers, machine operators and stevedores, are walking out in a dispute over pay.

It is the first strike at the Suffolk port since 1989 and is the latest outbreak of industrial action to hit the bruised and battered economy.

Unite said the stoppage will have a big impact on the port, which handles around four million containers a year from 2,000 ships.

But a port source said the strikes will be an ‘inconvenience not a catastrophe’, claiming the supply chain was now used to disruption following the pandemic.

‘Disruption is the new normal. The supply chain has moved from “just in time to just in case”,’ he added.

He also suggested some suppliers of white goods such as fridge freezers might actually welcome a break because of slower sales due to the cost-of-living crisis.

Unite general secretary Sharon Graham said: ‘Felixstowe docks is enormously profitable. The latest figures show that in 2020 it made £61 million in profits.

‘Its parent company, CK Hutchison Holding Ltd, is so wealthy that, in the same year, it handed out £99 million to its shareholders.

‘So they can give Felixstowe workers a decent pay raise. It’s clear both companies have prioritised delivering multimillion-pound profits and dividends rather than paying their workers a decent wage.

‘Unite is entirely focused on enhancing its members’ jobs, pay and conditions and it will be giving the workers at Felixstowe its complete support until this dispute is resolved and a decent pay increase is secured.’

The Port of Felixstowe said in a statement: ‘The company is disappointed that Unite has not taken up our offer to call off the strike and come to the table for constructive discussions to find a resolution.

‘We recognise these are difficult times but, in a slowing economy, we believe that the company’s offer, worth over 8% on average in the current year and closer to 10% for lower paid workers, is fair.

‘Unite has failed our employees by not consulting them on the offer and, as a result, they have been put in a position where they will lose pay by going on strike.

‘The port regrets the impact this action will have on UK supply chains. We are grateful for the support we have had from our customers and are working with them to mitigate disruption.

‘The port provides secure and well-paid employment and there will be no winners from this unnecessary industrial action.’

Felixstowe handles nearly half of the containerised freight entering the country and the action could mean vessels have to be diverted to ports elsewhere in the UK or Europe.