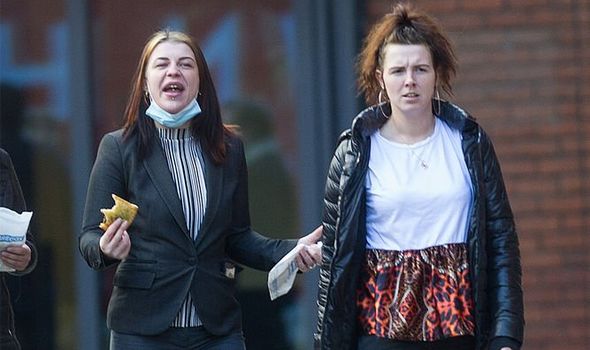 Hannah Linklater, 23, shoved it into Joel Johnson’s hall after their three-year relationship ended with a flurry of angry text messages.

Mr Johnson, 46, was woken by a noise and managed to stamp out the fuse before the firework could explode, in Burnage, Manchester.

Linklater and her best friend Louise Burgess, 27, of Bolton, who helped carry out the attack, had faced jail after they admitted arson.

But each was given a two-year suspended prison term and told to perform 150 hours of unpaid work.

Judge Hilary Manley told them at Manchester Crown Court: “To put a lit firework through the letterbox of somebody’s home is a wicked and dangerous thing to do.”

She added: “The motive was revenge borne out of anger and rejection by the victim. I accept you were affected by the volatility and toxicity of this relationship.”

The court heard the couple had begun dating when Linklater was 17 and they set up home using £7,000 left by her late mother.

The relationship was “abusive and toxic” and both made allegations against the other. It ended in 2018.

Simon Barrett, prosecuting, said: “Joel Johnson was asleep in the front upstairs bedroom when he was awoken by the sound of Hannah shouting she was going to smash up a car. He could see that the carpet at the bottom of the stairs was on fire.”

The two women were arrested in June last year but did not comment in police interviews.

Sara Haque, defending Linklater, said: “The relationship became toxic and abusive and when it ended she was left with nothing.”