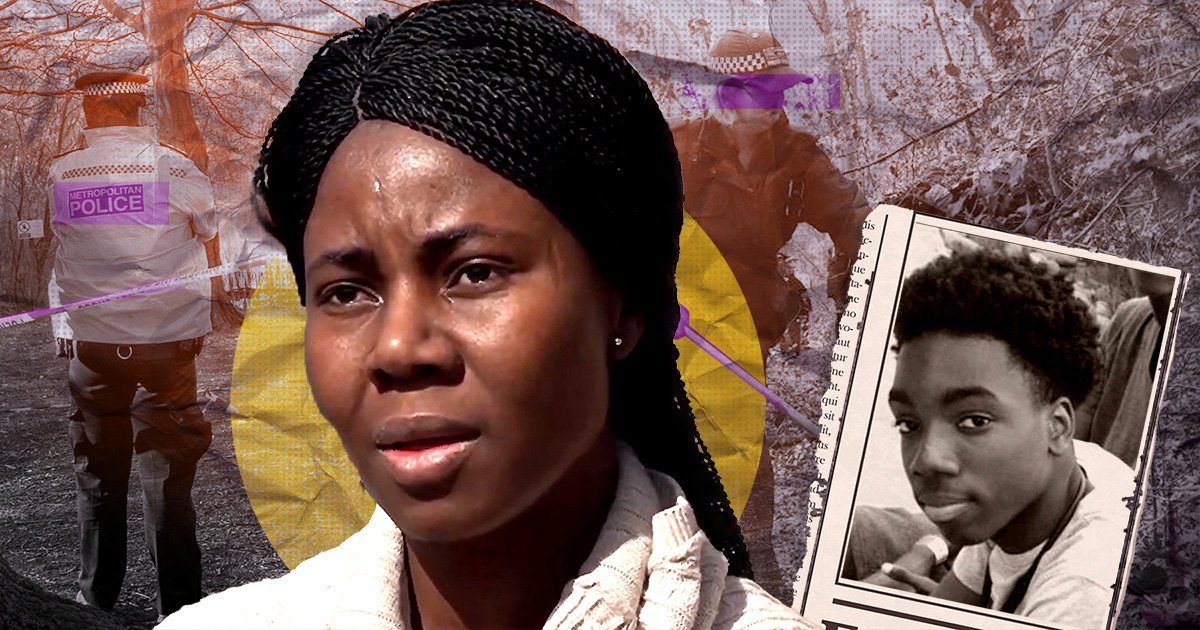 Evidence Joel has a void in her home where once she would have been greeted by her teenage son with the words, ‘hello mummy’.

As she tries to come to terms with the loss of her ‘baby’, figures show she is among a growing number of Black families who are making missing person reports to the police.

Ms Joel told Metro.co.uk she wishes she could wake up from a ‘terrible nightmare’ as she described how she feels failed by those she turned to for help.

Her son, Richard Okorogheye, was officially recorded missing at 8am on March 24, the day after she first contacted the police.

The 19-year-old, who lived with his family in Ladbroke Grove, West London, was last seen on CCTV walking towards Epping Forest, Essex, where his body was found on April 5.

The staff nurse told Metro.co.uk that she encountered a ‘dismissive’ attitude from the Metropolitan Police when she tried to report him missing over the course of two days.

Richard, an Oxford Brookes student, had sickle cell disease and had been shielding, yet she says he was a low priority when she reported his disappearance, two weeks before his body was found in a lake 20 miles from their home.

‘When I reported my baby missing they were very dismissive and they basically couldn’t be bothered,’ Ms Joel told Metro.co.uk.

‘They said my son was “not known to them” and he had “no record”,

‘He had no criminal record, he was a good boy who was raised very well, he was a man of integrity who was studying at university.

‘It was out of character for him to go missing, he would not just have gone and left everything.

‘I told them about his health condition and they said, “if he’s having a crisis he’ll find his way to the hospital”. I asked them if they had a clue what sickle cell is. I was just basically dismissed, they made me feel like one little African woman talking on the phone.

‘They should have immediately treated my son as high priority, but the fact was they didn’t make any attempt at all.’

Ms Joel believes that race hampered the way her initial report was handled.

‘The fact is that I’m an African woman with an African accent,’ she said.

‘Maybe if I was a lawyer and I was a completely different colour and my son had blue eyes I would have been taken seriously.’

Ms Joel told Metro.co.uk she was left to gather information about her son’s movements herself in the early days of the search.

‘The most hurtful thing is that they didn’t pass on information I gave them, they didn’t go out to get the information, I was the one doing that,’ she said.

‘Why should it be like that? They have a duty of care like we nurses and doctors have to our patients.’

Ms Joel, who is being represented by law firm Birnberg Pierce, passed on her concerns to the Home Secretary, Priti Patel, at a meeting in May and wants to help other families facing similar circumstances.

She said: ‘I want to change the system so that the police can look into where they are falling short and where they are failing. I want them to pick up on this to prevent another case like mine from happening again.

‘There are a lot of things happening already but at the very least the police should provide some extra training about the approach they take when someone is reporting a child missing.

‘If the police are lacking in that area they should provide training.’

The case has led to four police staff members being served misconduct notices by the Independent Office for Police Conduct (IOPC) over potential failings in the way the investigation was initially handled. The IOPC has said its independent investigation ‘will address these complaints and examine the Met’s overall handling of the missing person report’.

The police watchdog is also due to consider ‘whether Richard’s or his mother’s ethnicity played a part in the way the initial reports of his disappearance were handled’.

The aspiring tech entrepreneur’s death is being treated as unexplained, with police not believing there was any third-party involvement.

However, Ms Joel, speaking through her law firm, has previously called on the Metropolitan Police for a ‘full and fearless investigation which is not predicated on the assumption of suicide’.

Ms Joel, 39, also gave a heartfelt reminder that behind every missing person report is a human being.

‘I wish that Richard would return home and I could tell him that I’d had a terrible nightmare,’ she says.

‘The days get colder and emptier as I realise that, physically, he’s not coming home and I’m unable to cook his favourite meals any more.

‘I go to his place of rest every day just to find some closure and then come back to an empty home.

‘He used to say “hello mummy, how are you?” and wish me good morning, afternoon or evening.

‘He was someone you could have intelligent chats with, he had an intelligent smile and he was kind, patient and loving, always wanting to help other people with their burdens.

‘Although he had sickle cell, he didn’t let it stop him. He had a purpose in life and he was a wonderful, humble person to be around. Now when I come home I don’t get that any more.’

A public inquiry is being called for by one community figure in London, who has examined National Crime Agency (NCA) data showing the divide.

As reported by Metro.co.uk yesterday for our State of Racism series, analysis shows Black people have been over-represented in missing person reports since at least 2010.

Anecdotal reports also suggest that racial discrimination or bias is coming into play in the way that reports are responded to, leading to delays in time-critical cases.

The Black ethnicity group accounted for 14% of missing person cases in England and Wales during the last financial year, despite representing only 3% of the population, according to the figures.

The statistics suggest this could be a growing issue, as the number has risen to a four-year high, up from 11.3% of all cases between 2016 and 2017.

The trend can be traced back more than a decade to a report showing that people from ethnic groups were over represented between 2010 and 2011, although the data was limited at that point.

Have you experienced discrimination because of your race or ethnicity when reporting a loved one missing? If you are happy to share your experience with us, please get in touch: [email protected] pic.twitter.com/YkcMcIOB5p

In total, 31,732 people categorised as Black were reported missing in England and Wales between 2019 and 2020, according to the data.

The gap is even smaller in London, where 18,676 reports for Black people compare with 23,890 across the other two categories.

Missing People, which operates a free and confidential helpline, is running a survey to hear about ‘lived experiences’ of discrimination from Black and ethnic minority people who have made reports. Launching the forum, it said families ‘already facing the toughest trauma’ face being made to feel ‘powerless’ when loved ones are not treated as a high priority.

A spokesperson for the Metropolitan Police Service (MPS) said: ‘For each case, a bespoke and proportionate response is developed, and the MPS continue to produce ongoing preventative work.’

The Met uses a high, medium and low grading system for handling reports, based on experiences of locating people, such as someone who has not used their phone for a prolonged period of time.

Appeals are pro-actively issued by the force to the media and via its social media channels.

The spokesperson said: ‘Officers who handle cases of missing people are required to highly document each action and development in each case and account for their actions.

‘If there are concerns around the way an investigation is conducted, the Met will conduct a detailed internal investigation and remain open to investigation by external agencies such as the IOPC.’

The spokesperson, speaking before the latest two misconduct notices were served by the IOPC on Met staff, added: ‘In line with policy, as Richard had been reported missing prior to the discovery of his body, a referral was made to the Met’s Directorate of Professional Standards and to the IOPC, who are conducting an independent investigation.

‘We are aware misconduct notices have been served by the IOPC on two members of police staff attached to Met Command and Control in connection with the IOPC’s investigation.

‘The staff are not suspended or on restricted duties.

‘We acknowledge the subsequent complaints made by Ms Joel and will co-operate fully with the IOPC on all matters.’

‘While those who go missing can be driven to do so by individual circumstances, UK Missing Persons Unit initiated work with academia in late 2020 in order to seek an increased understanding of the potential reasons for minority over-representation.

‘This work will remain ongoing throughout 2021.’

For more information about missing people and to view appeals click here.

The State of Racism

This series is an in-depth look at racism in the UK.

We aim to look at how, where and why individual and structural racism impacts people of colour from all walks of life.

It’s vital that we improve the language we have to talk about racism and continue the difficult conversations about inequality – even if they make you uncomfortable.

We want to hear from you – if you have a personal story or experience of racism that you would like to share get in touch: [email protected]