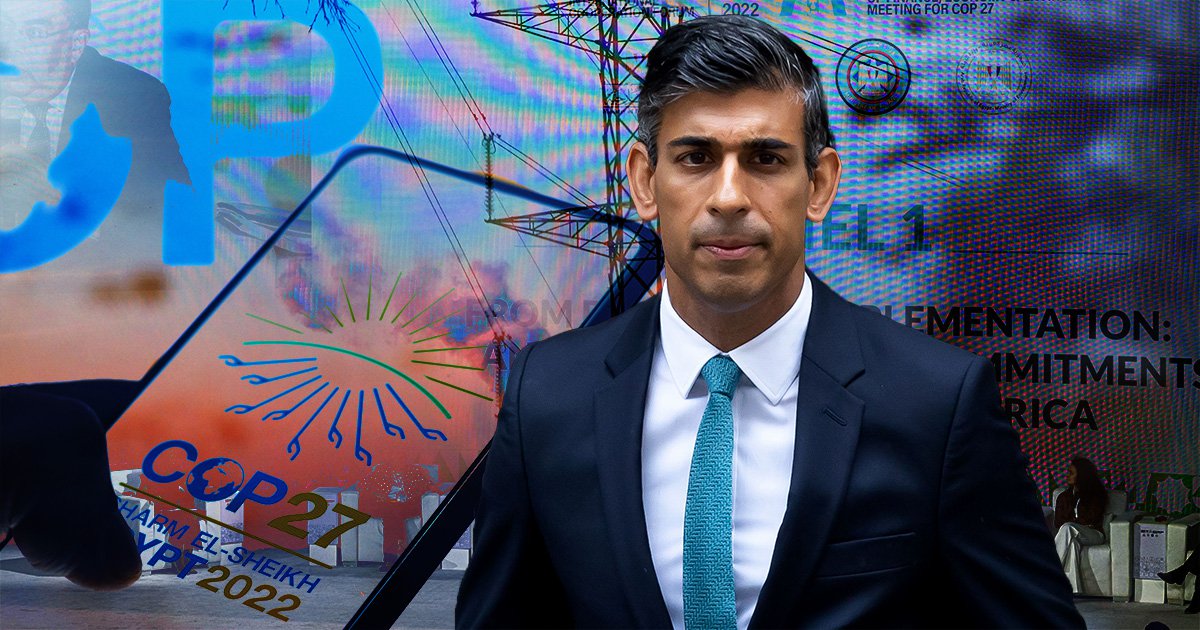 Rishi Sunak has been urged to make a U-turn on his decision to snub the Cop 27 climate change meeting in Egypt next week.

The new Prime Minister has faced a backlash from eco experts who said it would be ‘valuable’ for him to attend.

He is considering changing his focus and heading to the meeting of World Leaders, it has been claimed.

His earlier insistence that he must focus on the ‘depressing domestic challenges’ rather than go to the summit sparked a backlash in the Tory ranks.

The Government’s climate tsar Alok Sharma said he was ‘disappointed’ by the move, while Tory former chancellor George Osborne asked why Mr Sunak would ‘trash’ the party’s record on the environment.

Food minister Mark Spencer today made clear the Prime Minister may go to the gathering of world leaders in the Red Sea resort.

– ‘He doesn’t know what it’s like’: Low earners on Rishi Sunak

– How much is Rishi Sunak worth? Inside the fortune of the wealthiest UK Prime Minister in history

He said: ‘The Prime Minister has a huge inbox…full to the brim.

‘Clearly, he wants to concentrate on the financial statement and that is what is he doing.

‘But if he is able to get through all of that, Copis very important to the Government, to our future, so we will send out senior ministers.’

Pressed if he would like to see the PM go to the summit, he added: ‘If he has got time.

‘Only he will know what he has got in his inbox and in his diary, if he has the time.

‘He will make that call and I’m sure it will be the right one.’

New levelling up secretary Michael Gove also urged people to judge the Government ‘by our actions’ on the environment rather than Cop 27 attendance.

Mr Gove told Sky News’s Sophy Ridge On Sunday programme: ‘I know that across Government we want to field the strongest possible team at Cop but there are strong pressures on the Prime Minister’s diary.’

‘Even more important than who goes is what we do,’ he told the BBC’s Sunday With Laura Kuenssberg, saying the UK is the ‘fastest’ decarbonising economy in the G7 and is moving towards electric vehicles and renewable energy.

‘Judge us by our actions,’ he said.

Green Party MP Caroline Lucas said Mr Sunak should be rethinking his decision not to attend the Sharm El-Sheikh summit.

She told Ms Kuenssberg: ‘It is absolutely so wrong that Rishi Sunak is not going because the UK is still the holder of the Cop presidency. Symbols matter.’

Asked about reports that Boris Johnson could attend Cop 27, she said: ‘If it embarrasses Rishi Sunak to reverse his disgraceful decision and actually get there himself, all and good.’

Mr Sharma, the president of last year’s Cop 26 summit in Glasgow, who will lead the UK negotiating team at the UN climate conference in Sharm el-Sheikh next week, said: ‘I’m pretty disappointed that the prime minister is not going.

‘I understand that he’s got a huge in tray of domestic issues that he has to deal with.

‘But I would say that going to Cop27 would allow for engagement with other world leaders. And I think it does send a signal — if the prime minister was to go — about our renewed commitment on this issue.’

It has also been reported that Boris Johnson is planning to attend the summit in Egypt to show his support for international efforts to tackle climate change.

Touting the Tories’ environmental record, he told Channel 4’s The Andrew Neil Show: ‘Why trash that because you don’t want to get on a plane to Egypt?’

But Lord Deben, chairman of the Climate Change Committee, warned the UK’s bid to tackle emissions was ‘off track’.

The peer told the Independent it would be ‘very valuable’ for Mr Sunak to go to the climate summit.

Allies of the Prime Minister indicated he might go after all, the Financial Times and i reported.

The sources said that while dealing with the economic crisis is his priority, he could go to Egypt if enough ‘progress’ is made on preparing the November 17 budget, according to the newspapers.

Speculation that Boris Johnson, Mr Sunak’s predecessor at No 10, could go to the UN conference has increased pressure on the Prime Minister.

It added to a wider dispute over UK representation, after the King was advised by Downing Street not to attend the Sharm El-Sheikh summit.

Charles will host a reception for 200 guests, including US climate envoy John Kerry, at Buckingham Palace on Friday to mark the climate conference, with Mr Sunak due to say a few words.