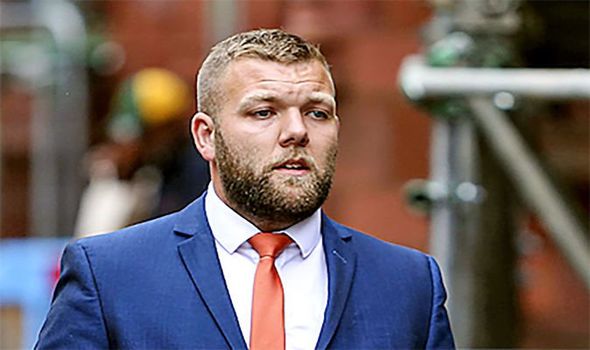 Just the previous day, he had assaulted a male cyclist. As both victims were black, they have re-ignited concerns over the use of force on the black community.

Jones’ lawyer urged District Judge Shamim Qureshi to be lenient with his client and suspend any jail term as he has now been sacked.

But at Birmingham Magistrates’ Court, Judge Qureshi told Jones, “What we have here in this case is not simply an isolated incident. I would be failing in my public duty to suspend your sentence.”

Jones, who joined the West Midlands force in 2015, made the attacks in view of CCTV cameras.

He was filmed pulling innocent Michael Rose, 44, off his bicycle on April 20. Jones punched him three times in the back while appearing to bang his head on a patrol car, before his colleague handcuffed him.

Chillingly the footage shows the officer only stopping when a motorist drove past the scene. Passers-by are seen appealing to Jones to stop, but he responds by body-slamming Mr Rose against the car.

Jones was captured the next day kicking a 15-year-old on the ground in a nearby area of Birmingham. Chief Constable Sir David Thompson fired him this week when he was found guilty of two counts of assault at Coventry Magistrates’ Court. But an Independent Office for Police Conduct probe found no evidence of discrimination.

Sir David said: “Any right-thinking member of the public would feel the force applied to be excessive.

“This case will reinforce the view that his bad behaviour has only been acted upon because of clear CCTV. Whilst I do not believe this to be true we fail if we do not confront the… fact that force is used by us disproportionately on black men.”