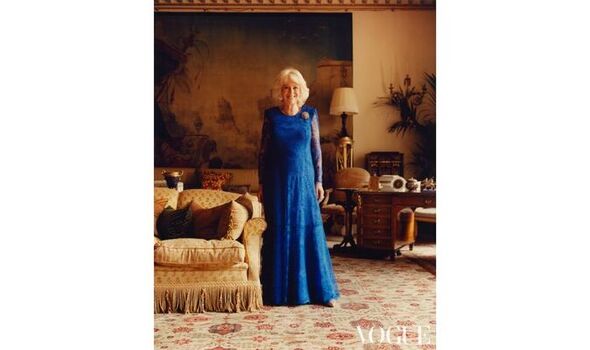 And she vowed to continue with her work against domestic violence and other issues she is passionate about when she becomes Queen as “there’s a lot of things to be done still.”

To mark her 75th birthday on July 17, Camilla makes her debut in next month’s issue of fashion bible British Vogue and was photographed at Clarence House.

She confesses that as more birthdays pass, she wishes she could turn the clock back but loves being a grandmother because she can spoil her grandchildren.

However, she explained how in the 1990s she and her family faced a level of scrutiny as Charles’ marriage to Princess Diana broke down that remains unmatched to this day.

“It’s not easy,” the Duchess said. “I was scrutinised for such a long time that you just have to find a way to live with it.

“Nobody likes to be looked at all the time and, you know, criticised… but I think in the end, I sort of rise above it and get on with it.”

“You’ve got to get on with life.” Charles, 73, and the then Camilla Parker Bowles later married in a civil ceremony at Windsor Guildhall on April 9, 2005.

Explaining how she finds time for her marriage between performing royal duties, Camilla said: “It’s not easy sometimes but we do always try to have a point in the day when we meet.”

“Sometimes it’s like ships passing in the night but we always sit down together and have a cup of tea and discuss the day.”

“It’s lovely to catch up when we have a bit of time. You know when we go away, the nicest thing is that we actually sit and read our books in different corners of the same room.”

“It’s very relaxing because you know you don’t have to make conversation. You just sit and be together.”

As an avid reader, Camilla launched her online book club during the pandemic.

She said: “I hardly knew what Instagram was. I didn’t even know where to find it or how to get on it. We battled a lot to get it going. To my amazement, it took off.”

She confessed she no longer gives much thought to birthdays passing and added: “I let them come and go. I mean, I’d be very happy to turn back the clock.”

As a grandmother to her five grandchildren, aged from 12 to 14, she admitted:

“it’s very nice getting a text,” adding: “We learn from very young people and they learn from us too.”

The Duchess said she has no intention of slowing down or stopping her work when she is Queen.

“Oh, I shall carry on as much as I can. You can’t desert things that you’re in the middle of.”

Camilla said she was spurred on to continue tackling the taboo of domestic violence.

“People can still love the people that abuse them, and feel such guilt and such shame that they think it’s their fault, so they bury it.”

“It becomes a sort of terrible hidden secret,” she said.

The Duchess will also feature in an upcoming one-off ITV documentary as she guest edits Country Life magazine.

Camilla’s Country Life, by award-winning director Michael Waldman, will accompany her as she plans and oversees a special edition of the magazine during its 125th year.