Meghan and Prince Harry’s Oprah claims have now been challenged after it was reported the couple held a series of meetings with Quibi, the short-form entertainment streaming service which shut down in October 2020. The discussions started in early 2019 and continued until after the so-called Sandringham Summit on January 18, 2020.

After Prince Harry discussed his and Meghan’s exit terms from the Royal Family with the Queen, Prince Charles and Prince William in Norfolk, he travelled back to London to meet executives from the platform, according to the Daily Telegraph.

A source with knowledge of the situation told the newspaper: “There were well-developed proposals in place with Quibi from early 2019.”

Among the Quibi staff who took part in meetings with the Sussexes was founder Jeffrey Katzenberg and the platform’s CEO Meg Whitman.

Plans were so advanced there were conference calls to discuss a plan for Meghan and Harry’s own series of 10-minute videos. 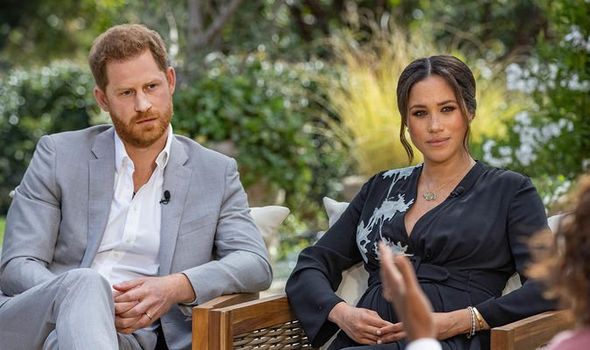 The discussions with Quibi, which launched in April 2020, came to a halt with the beginning of the pandemic.

By the time Meghan and Harry announced they had signed a deal with Netflix in September, Quibi – initially hailed a potential new YouTube – was already struggling.

A royal source said: “A lot of it was orchestrated by Meghan’s people in America. It was a bit of a secret squirrel.”

This is a live blog. Check below to see the latest royal updates

One insider added Meghan continued to be supported and consulted by her team in the US even after becoming a senior royal.

This team included her lawyer Rick Genow, her business manager Andrew Meyer, her talent agent Nick Collins and Keleigh Thomas Morgan of PR firm Sunshine Sachs – by which the Sussexes are now represented.

The source told the Telegraph: “Rick, Andrew and Nick came with the territory. So did Keleigh.

“They were constantly fielding proposals for Meghan and bringing stuff to her.

“But the team in America did pose problems for staff at Kensington Palace.

“There was always quite a lot of secrecy surrounding the couple’s conversations with the US.

“Certain people would be in the know about what was going on with things like Quibi, while others wouldn’t have a clue.

“Discussions that had been quite public would then suddenly go underground, into the ‘private’ space.

“It was all quite difficult to manage at times.”

Palace aides were reportedly aware of the discussions with Quibi and fearful Meghan and Harry would be accused of trying to cash in on their royal status.

One source said: “Chinese walls were put up and certain amounts of information weren’t shared which just made it difficult to protect the couple from accusations of attempting to monetise their role.

“It was hard for royal aides to be supportive of projects like Quibi because they knew how it might look but the couple kept dismissing these concerns.

“They didn’t seem to see the pitfalls of any potential conflict of interests.”

Other sources who spoke with ET Canada also weighed in claims there were ongoing discussions with between the Sussexes and Quibi.

Insiders with knowledge of the matter said Meghan and Harry did not initiate the conversation with the streaming platform but it was Mr Katzenberg who reached out to them.

The sources added the first official meeting in person took place during the summer of 2019 and Meghan and Harry did not go into these meetings with the intent to personally profit from this partnership.