Harry’s mental health documentary series, The Me You Can’t See, has been in the works even before Megxit, the US chat show host has revealed. Even while as a full member of the Royal Family, the Duke has been preparing to strike out against mental health.

Harry reunited with Winfrey for The Me You Can’t See: A Path Forward, which was released in the early hours of Friday and follows their Apple TV docuseries.

The US talk show host revealed she started working with her “fellow executive producer” on the project in 2019 – before Harry and Meghan Markle quit royal duties in 2020.

Winfrey said: “It’s a project that we were inspired to produce after we first met, really, and talked about some of the most pressing issues of our time.

“So we spent two years making this series … together.”

Harry added: “Yes, I remember that chat very, very well all that time ago.” 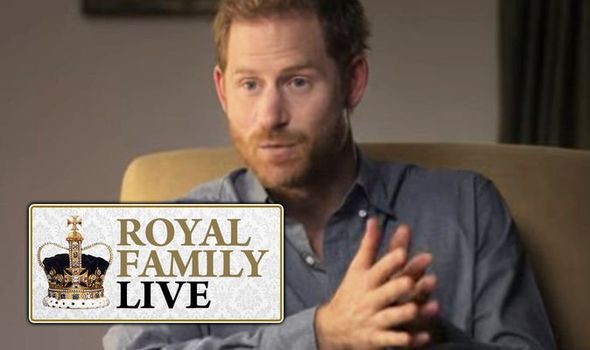 The Sussexes announced their bombshell Megxit decision in January 2020 – a move that is said to have blindsided the monarch.

The Queen was forced to hold a crisis summit with senior royals to resolve the crisis.

Harry and Meghan went on to end royal duties in March 2020.

The couple is now living in an £11 million mansion in California and launching new careers in America.

Harry and Winfrey’s docuseries, which was released last Friday, saw him hit out at the royals.

It comes after his other recent attacks during an appearance on the Armchair Expert podcast, as well as his and Meghan’s tell-all interview with Winfrey in March.

7.45am update: Harry and Meghan interviews leave royals watching on ‘with hands over eyes’

Prince Harry and Meghan Markle leave the Royal family “with hands over their eyes” every time they appear in controversial interviews, an insider has revealed.

An insider told the Daily Mirror: “Each time Harry and Meghan now speak, the family look on with their hands over their eyes.

“Between them, they have made several serious accusations which they know will not be responded to by Harry’s family.”

7.30am update: Harry opens up on ‘shame’ families feel for failing loved ones over mental health

Prince Harry has said that families often feel shame and guilt over their failure to spot that their loved ones are struggling with mental health problems.

The Duke of Sussex was speaking on new Apple TV+ show The Me You Can’t See: A Path Forward.

The episode took the form of a virtual town hall and included the participation of Glenn Close.

The Hollywood actress and the Duke discussed how family members often feel when they learn that their loved ones are suffering from mental health issues.