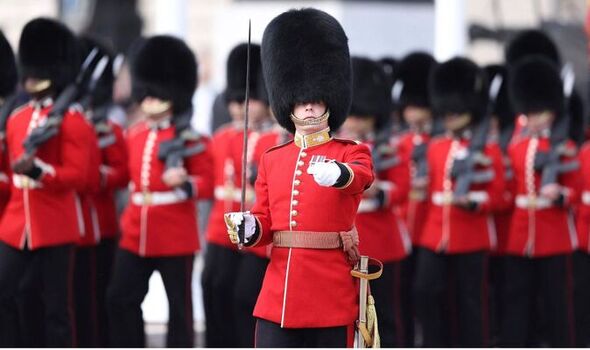 The famous Royal Guards, now known as the King’s Guard following the death of Queen Elizabeth II, come from several regiments in the British Army. They are easily recognisable by their red uniforms, black bearskin hats, and their commanding presence at Buckingham Palace.

Their hats stand approximately 18 inches tall and weigh around 1.5 pounds.

The Grenadier Guards have an unusual way of wearing their impressive headwear, with the strap for the hat placed under their bottom lip instead of under their chin, and there are several theories as to why they do this, reports Wales Online.

It is reported that the decision to wear the chained strap for these headpieces under the lip comes from when soldiers actually fought while wearing them.

If a soldier was shot, the heavy hat could fall backwards and cause the soldier’s neck to break if they were wearing a chin strap.

Therefore, wearing their helmet straps under their lips would be less dangerous.

Another theory for why the guards put their straps under their lips is for one regiment to distinguish themselves from others serving with the Foot Guards.

The guards have been a part of British history for more than 360 years, and their distinct ceremonial uniforms are also remembered throughout history.

The hats are made from Canadian black bear fur, and it is said that it takes one bear pelt to make one hat, which can last for 80 years if cared for properly.

Each regiment puts a slightly different spin on the famous ceremonial hat.

One of the regiments, the Grenadier Guards, fought at the Battle of Waterloo in 1815, and their trademark hats date back to this era.

They were designed to intimidate their enemies by making them appear bigger.