The Royal Navy and RAF have teamed up with the US to destroy and sink a warship in the first exercise of its kind in 18 years. Type 23 frigate HMS Westminster, a Wildcat helicopter and three RAF Typhoons were involved in the live-fire practice, using high-powered weaponry to sink decommissioned frigate 138 metre-long (453 feet) USS Boone.

The exercise in the North Atlantic was the first time in 18 years that the Royal Navy had targeted a real warship and the first time Typhoons have been used to drop live ordnance on a warship at sea.

Commander Ed Moss-Ward, Commanding Officer of HMS Westminster, said: “Atlantic Thunder has demonstrated that UK and US naval and air forces can work together to deliver an end-to-end kill chain against a maritime target at long range.

“The integration of high-end weapons, sensors and communications with our NATO allies is key to the collective warfighting capability of the alliance demonstrated by the sinking exercise. 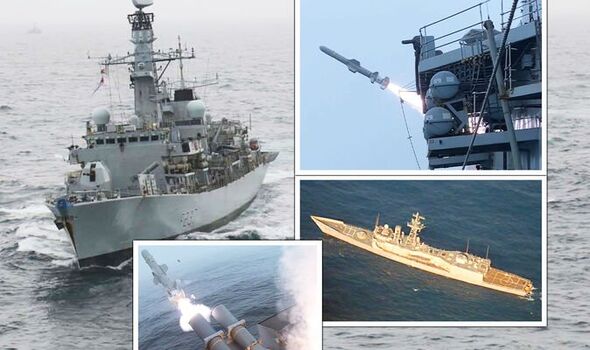 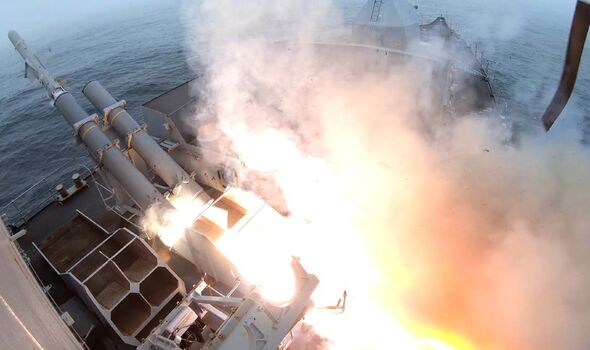 “The firings have supported the development of the Royal Navy’s targeting and weapon capabilities and afforded opportunity to conduct realistic training to validate tactics and operating procedures.”

A Navy spokesman said: “It was a rare, live test of complex weapons against a realistic target far out to sea and tested the power and accuracy of naval and air forces, giving allies real-world experience of hitting targets at sea from long range and proving the capability of several advanced warfighting and targeting techniques.”

He added Type 23 frigate HMS Westminster fired two Harpoon anti-ship missiles at the same time as a US P-8 Poseidon patrol aircraft launched one of its own with 660kg of high explosive striking ex-USS Boone at the same time. 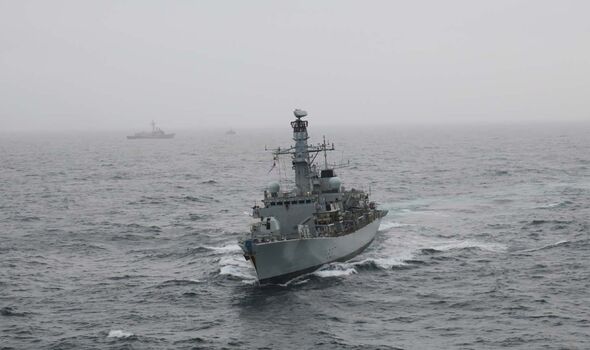 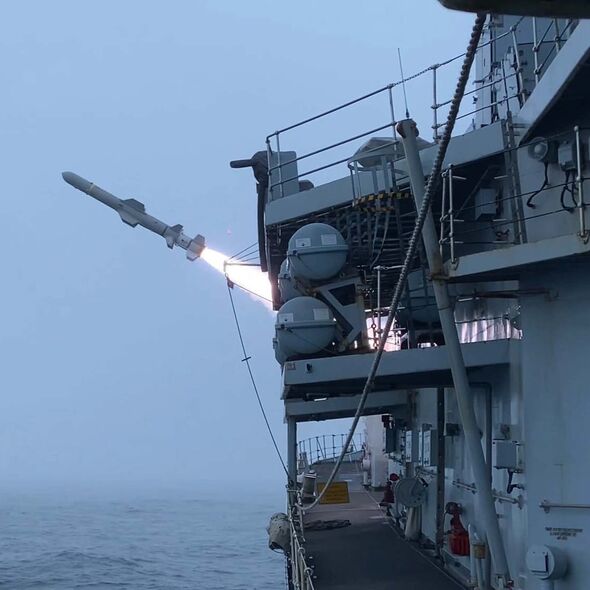 “This was the first firing of the Fleet Air Arm’s new, anti-ship weapon against a realistic target at sea – to this point Martlet had only been used against purpose-built targets.”

The Wildcat’s crew remained airborne and used an onboard, laser-targeting pod to guide a Typhoon fighter from 41 Squadron RAF to launch Paveway IV precision-guided munitions against the target.

It was the first time an RAF Typhoon had dropped live ordnance onto a warship used as a maritime target and also the first time a Royal Navy helicopter had guided the Paveway IV onto its bullseye. The Navy spokesman added all toxic materials and pollutants had been removed from the USS Boone before it was used as a target.

Lieutenant Ross Gallagher of 815 Naval Air Squadron, in command of Westminster’s Wildcat helicopter, said: “The exercise presented a great opportunity for the Wildcat to showcase the Martlet missile system and to Laser Target Designate for Typhoon dropping Paveway IV.”

DON’T MISS:
Is there a draft in the UK? [REPORT]
Prince Harry told to ’pulp all copies and abandon his memoir’ [REVEALED]
Kate & Meghan ‘broke the ice’ ahead of Windsor walkabout [LATEST] 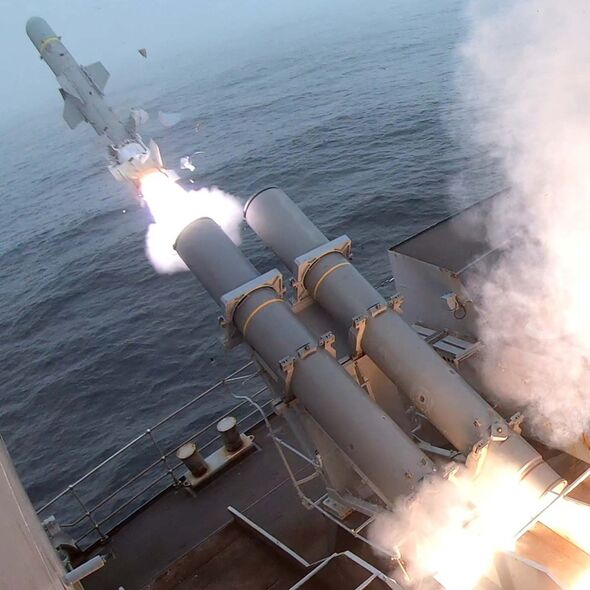 Retired in 2012, USS Boone was towed from Philadelphia to Campbelltown, Scotland, where it arrived last month, according to UK Defence Journal.

A source told the same publication the main aim of the exercise was to test a new, US-targeting satellite.

Oliver Hazard Perry-class frigate USS Boone served in the US Navy between 1982 and 2012.

She is named after Vice Admiral Joel Thompson Boone, a Medal of Honour recipient and the most highly decorated medical officer of World War One. 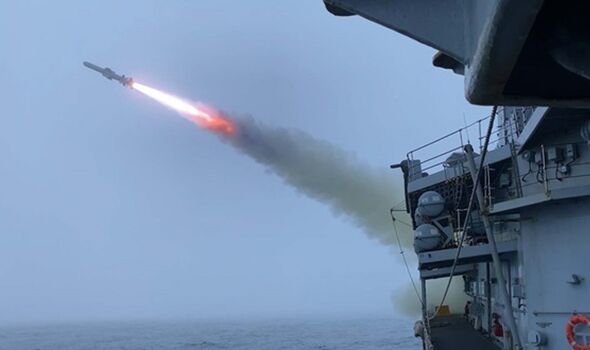 Ex-USS Boone is now at the bottom of the sea where it remains under the ownership of the US Government.

The joint exercise comes after the Royal Navy flagship HMS Queen Elizabeth set sail earlier this month to take part in a US deployment in place of its sister ship which broke down off the Isle of Wight.

HMS Prince of Wales limped back to Portsmouth Naval Base after a coupling on its starboard propeller shaft broke.

The £3billion aircraft carrier was due to go into dry dock to undergo repairs.

The navy did not detail which of HMS Prince of Wales’s diplomatic engagements and military exercises would be carried out by HMS Queen Elizabeth.

The programme included flight trials with F-35B Lightning jets and port stops in New York, Halifax in Canada and the Caribbean.

But the Royal Navy confirmed it would be in New York to host the Atlantic Future Forum, which is a defence conference aimed at strengthening UK and US ties.

After the commitments in the US, HMS Queen Elizabeth was due to return to Europe to take part in operations in the Baltic and Mediterranean with NATO partners.

They also kept watch over Udaloy-class destroyer Vice-Admiral Kulakov and tanker Vyazma as the three ships headed home from the eastern Mediterranean after having supported Russia’s invasion of Ukraine since February.