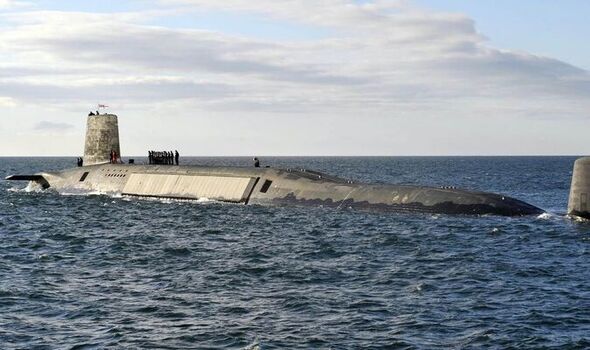 A submarine carrying Trident 2 nuclear missiles was forced to abort its clandestine mission and surface after a fire broke out on board, the MoD has confirmed.

HMS Victorious was somewhere in the North Atlantic when disaster struck about six weeks ago.

An electrical component on board the £3million Vanguard-class sub caught fire and the commanding officer took precautionary measures.

Breaching the surface risked revealing its location to Russia, which constantly plays cat-and-mouse with Western submarines.

The cause of the blaze was a fault in a self-contained electrical module that converts AC power to DC.

Its crew helped battle the fire, but luckily the module also has four built-in carbon dioxide injectors to use in such emergencies.

They release a quantity of gas into the electrical component, helping to extinguish the fire.

Naval sources told the Sun the fire was rapidly contained.

After assessing the damage, the captain ordered the sub to return to base at HMNB Clyde, in Faslane.

HMS Victorious is one of four Trident submarines that carry out nuclear patrols, known as Continuous At Sea Deterrent (CASD).

A Royal Navy Spokesperson told The Telegraph the boat was not in the role of CASD at the time of the incident.

Instead, it came as the boat was preparing to take part in an undisclosed exercise with the US.

A Royal Navy spokesperson said: “The Continuous At Sea Deterrent is unaffected, but we do not comment on the details of submarine operations.”

The 30-year-old vessel is overdue a major refit that will see it, and its sister subs, replaced by an equal number of Dreadnought-class boats from the 2030s.

The move will cost around £31billion and will see the new vessels also armed with Trident 2 missiles.