A new biography, Finding Freedom, has claimed Kate failed to welcome Meghan into the Royal Family. Authors Omid Scobie and Carolyn Durand also suggested that by the Duke and Duchess of Sussex’s final engagement in March, Kate “barely acknowledged” her sister-in-law due to the fallout between the couples. However, the Duke and Duchess of Cambridge have hit back today. A friend told The Mail on Sunday: “It’s just completely wrong to suggest they didn’t talk and plain wrong to say the Cambridges weren’t welcoming.”

They added Kate hosted Meghan for Christmas, invited her to their “private inner sanctum at Anmer Hall” and the Duchess of Cambridge “personally cooked her favourite vegan food”.

Media website Insider also pulled together all the photographs from Meghan’s time on the royal frontline which it believes prove the rift was not between the two Duchesses.

In an article — published shortly after the bombshell Megxit announcement in January — royal commentator Kristen Meinzer told the website the photograph of Meghan and Kate embracing at the Commonwealth Day service in 2019 was telling.

Kate was pictured stepping forward to embrace her sister-in-law in a surprising royal display of affection in Westminster Abbey, in front of huge crowds.

The commentator said: “I’m sure plenty of critics will look at this photo and see a one-armed hug that’s insincere. 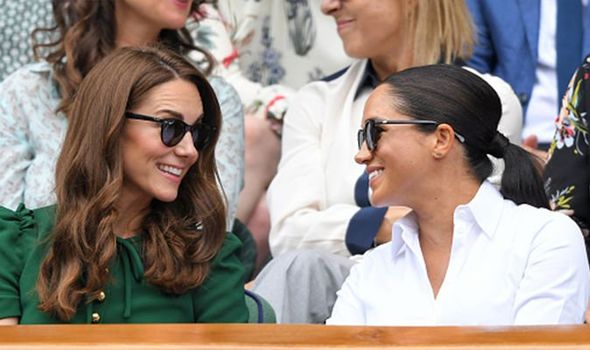 “But what I see is Kate being both gentle and affectionate with her heavily pregnant sister-in-law.

“I see what might be a funny joke or a sweet word being whispered between the two.

“And I see both of them choosing to embrace each other at a formal event that probably didn’t require embraces at all.”

Ms Meinzer then examined a photograph of Kate and Meghan a few months later, at Wimbledon. 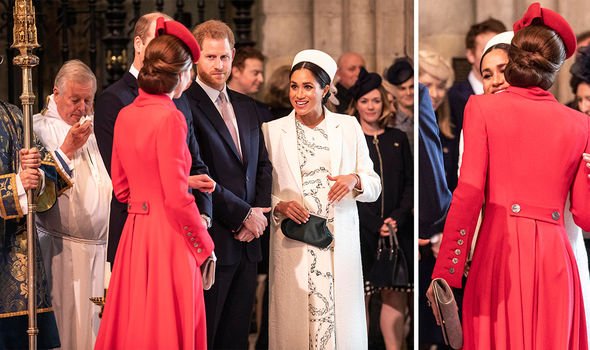 She said: “Look at how Kate is leaning in here and Meghan is gazing into Kate’s eyes.

“It almost looks as though Meghan is confiding in Kate and that Kate is doing her best to offer her full physical attention to whatever Meghan is saying.”

A photograph from the same day shows the pair smiling at one another, in a way that is “filled with warmth and smiles”, according to the royal expert.

She remarked: “It’s a happy moment at a happy place. They seem fully engrossed with each other — joyously so. 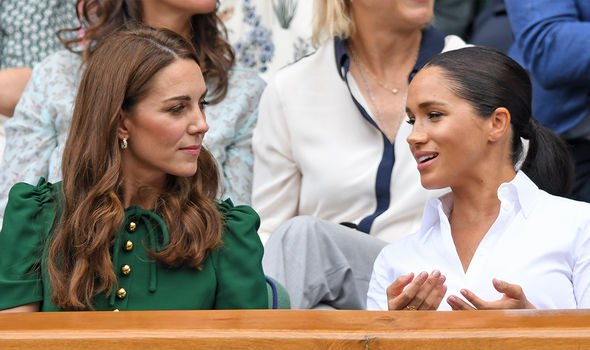 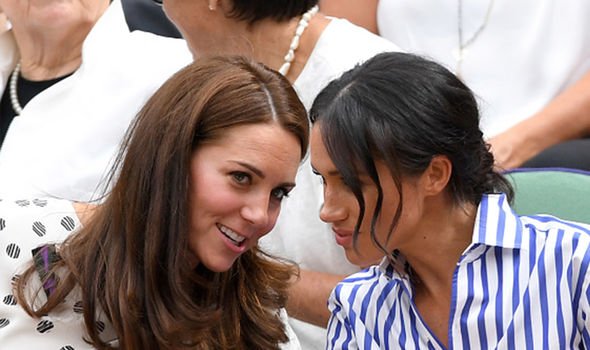 “I look at this and think, ‘there’s something special these two share’.”

The previous year the pair attended Wimbledon together and ended up mirroring each other as well, waving to the crowds with an identical motion.

The royal commentator said it showed they were unintentionally performing the same action, as friends and family often do.

She said they were clearly “enjoying each other’s company” and “neither is copying the other or trying to push back”.

At the same event, Kate and Meghan were pictured whispering while sitting court side, again seeming to show a closeness between the two women.

However, last summer, reports emerged that claimed Meghan and Kate’s rift had escalated and they barely spoke when attending a charity polo match together with their children. 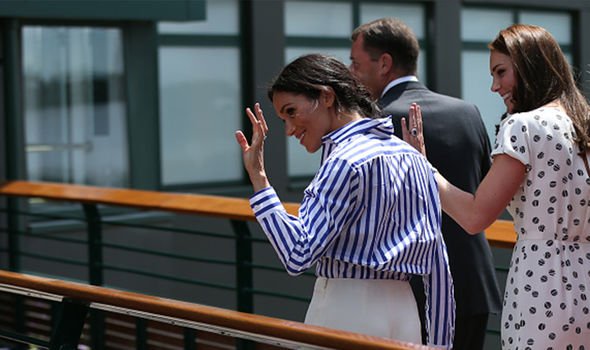 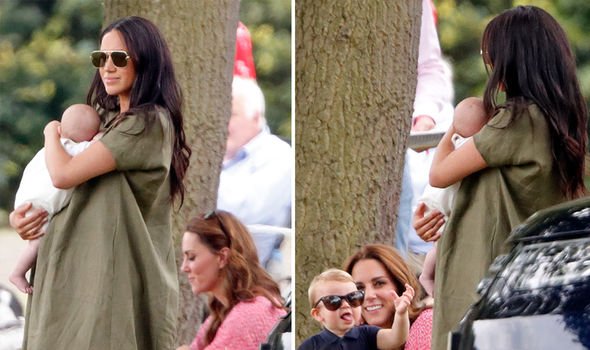 Yet, Ms Meinzer said similar photographs of Kate, Louis, Meghan and Archie from the same day told a different story.

She explained: “They are together. Kate is laughing! Louis is reaching for his aunt and cousin! They are having fun!”

One friend told The Mail on Sunday this weekend the event was supposed to be a show of solidarity between the two households.

They explained: “Everyone saw Kate and Meghan chatting. She [Meghan] had the baby and it was really sweet.

“George went up to Archie and gently stroked his head. Louis was larking around and making Meghan laugh.

“It was really positive and happy.”

Finding Freedom, has been serialised in The Times and The Sunday Times, and will be released on August 11.