Hilary Benn struggled to answer how the Remain campaign “will get what it wants” with time to stop a no deal Brexit quickly running out. During an interview this morning on Sky News, host Sophy Ridge pointed out that Remain-backing MPs in Parliament were likely to fail to stop a no deal Brexit if Boris Johnson gains power. Earlier this week, MPs rejected a Labour motion paving the way for parliament to block a no deal departure from the EU. 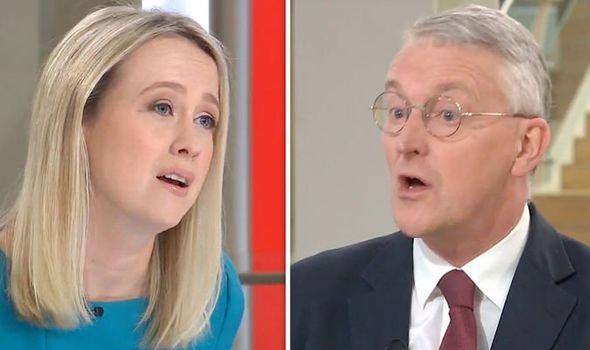 The cross-party effort was defeated by 309 votes to 298, in a blow to hopes of preventing a Brexiteer prime minister from taking the UK out of the EU without a deal in October.

Quizzed on this failure, Mr Benn tried to reference earlier votes that Remainer MPs had won.

He said: “The last time we voted formally, it was a huge defeat for no deal Brexit.”

Ridge jumped in: “But, you lost the attempt this week. It’s not clear-cut that you can stop a no deal Brexit.”

You don’t have much time left

The Labour MP then tried to dismiss the defeated motion as “simply procedural”.

Pointing to the Brexit timetable, Ridge said: “Will you be able to do what you want to do?

“You don’t have much time left. Parliament breaks over summer, then you come back for a couple weeks, then party conference season starts, and then we leave on October 31st.

Mr Benn tried to deflect this point by claiming a no deal Brexit would have no mandate, before hitting out at the prospect of Boris Johnson in office.

He said: “I will try to stop Boris. It would be completely irresponsible for any Prime Minister to do that. It would be economic vandalism

This comes amid claims by senior Tories that Boris Johnson’s hardline Brexit approach could spark a general election campaign in the autumn.