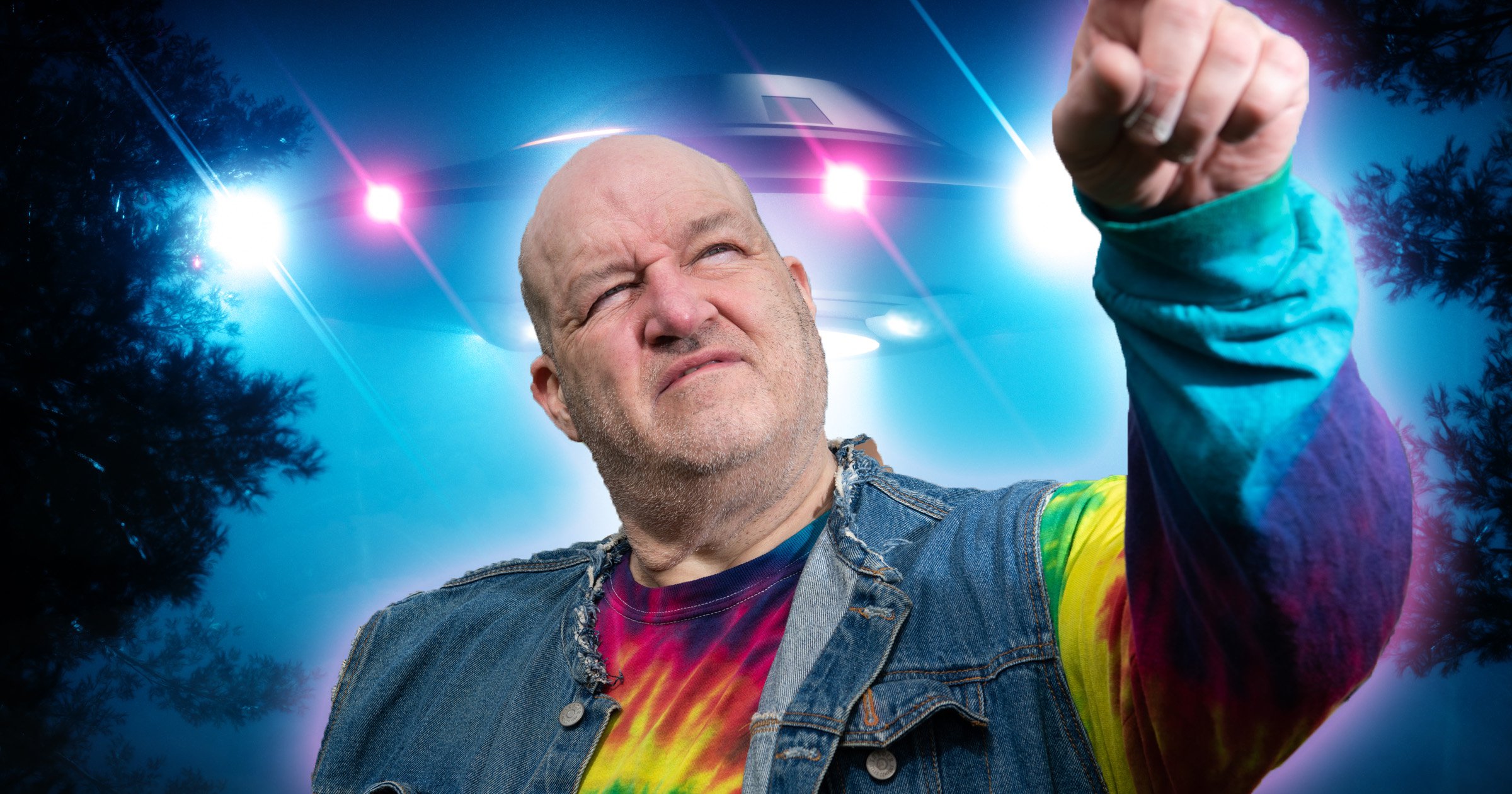 Are you ever bored with how mundane life can be?

Wake up, drink coffee, squish yourself into a stranger’s armpit to get to work before writing emails all day – only to do the same thing again and again.

Well, there may be hope! You still stand a chance of being selected as an alien super soldier, trained to fight in the ongoing intergalactic war.

Which, as it turns out, is what Russ Kellett claims happened to him.

The 58-year-old from Filey, North Yorkshire, believes he has been fighting for a race of 15-foot aliens since he was 28 years old. He also claims he has been abducted no less than 60 times.

He said: ‘The first time was when I was 16 when I was travelling home on my motorbike.

‘I went through a tunnel that I’d never seen before, and the next thing I knew, I was in what looked like a dentist surgery, with 15ft tall alien men, that look very much like Dracula without the sharp teeth, surrounding me.

‘I had some sort of tube pushed down my throat, and whatever liquid they pumped into me, it turned me into one of their super soldiers. 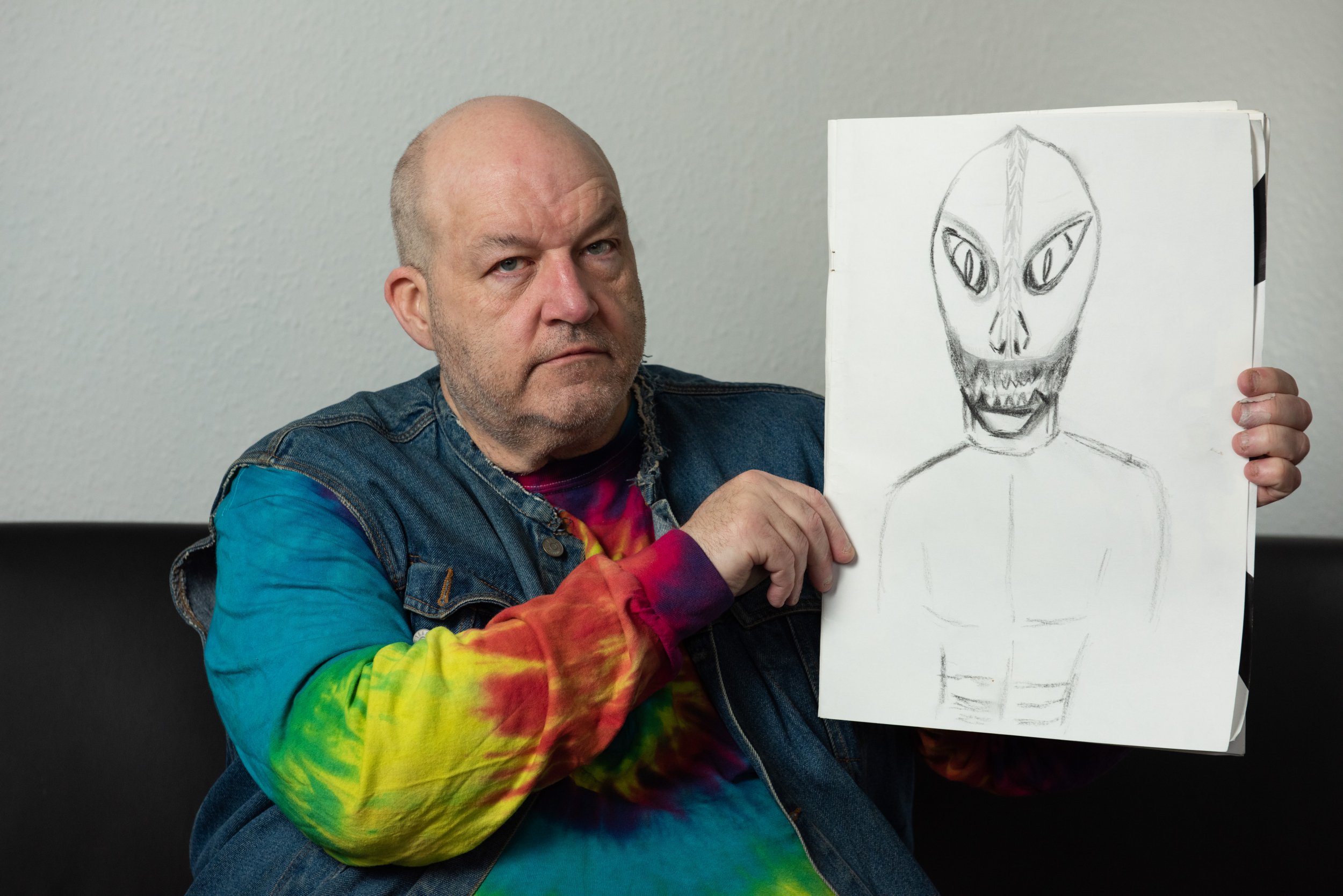 ‘For the past 30 years, I have been part of their army fighting the opposing race of aliens, the “Dragos”, which are tall and scaly, they have heads like dragons.’

Mr Kellett described a ‘room covered in checks – like a chessboard’ as the place he goes to whenever he is abducted.

He said he and his alien comrades use a glass ball, located in the middle of this room, which can transport them through space and time.

Mr Kellett thinks he now has chronic fatigue syndrome and post-traumatic stress disorder from his time involved in the space wars.

This has apparently been exacerbated by the supposed time difference between Earth and the planets Mr Kellett claims to have visited.

He said: ‘I’ve been gone for years and people don’t realise, as four hours here is four years on one of the planets I’ve been to.’

On top of this, Mr Kellett suspects his memory has been wiped by aliens who do not want him to remember fighting for them.

He said: ‘There are so many different races, but I struggle to remember the names of them all. I can only remember what they look like through the drawings I have these days.’

Even though the dates are ‘blurry’, Mr Kellett remembers being rushed to hospital with a brain tumour.

‘But there was nothing wrong with me,’ he said.

‘I just remember leaving the hospital and forgetting certain things, like the names of the races and where it was that I’d travelled to.

‘I’ve spoken with other abductees and they’ve said the same thing happened to them, it’s quite worrying really.’

Mr Kellett decided to share his story, along with his drawings and a video he claims shows a flying man and a UFO, to educate people on what is happening ‘under their noses’.

He said: ‘There is a whole paranormal and alien investigative department within each government and even they don’t know the full extent of what’s going on.

‘This war has been brewing and toiling for years, and some of these aliens need help. People can be abducted at any time, and they need to be prepared in such a scenario, in case they are sent out to fight.’

The US opened a department to investigate UFOs last December – under the purview of the Office of the Under Secretary of Defense for Intelligence & Security.

Conversely, the UK’s Ministry of Defence closed its UFO desk in 2009 and has since revealed it has no plans to reopen any research into the area

Nick Pope, who previously ran the desk, said it is ‘baffling’ how quick Britain is to dismiss the topic.

But the MoD insists: ‘No UFO report has revealed any evidence of a potential threat to the United Kingdom.’