BRUSSELS — Gathered at a glitzy Dubai resort this week for their annual conference, the leaders of Interpol hoped to emerge from the shadow of the controversy that erupted after Beijing snatched the agency’s Chinese president and unilaterally announced his resignation.

Yet, just weeks later, Interpol appears poised to select as its next president a senior security official from Russia, which has been accused of manipulating the agency’s arrest warrants to harass its enemies.

American and European officials were lobbying behind the scenes to tip a vote on Wednesday away from the Russian candidate, Aleksandr V. Prokopchuk. The virulently anti-Russian Ukranian government went public, declaring that Mr. Prokopchuk’s candidacy was part of a Kremlin assault on the international order.

For years, the Kremlin has used Interpol to demand the arrest of political enemies who have fled to other countries. This spring, William F. Browder, a critic of President Vladimir V. Putin of Russia, live-tweeted his arrest in Spain on a warrant issued in Moscow. He was quickly released, but the incident served as a reminder that Interpol’s vaunted systems remain vulnerable to Kremlin influence even after years of pressure from lawyers and rights groups.

Despite its portrayal in spy movies as an omnipotent global police force, Interpol has no powers to investigate crimes or to make arrests. Rather, it serves as a sort of United Nations for police leaders and an information clearinghouse to help the local authorities catch international fugitives. The police can ask Interpol to approve international warrants, known as red notices, requesting the detention of fugitives around the world.

For more than a decade, Mr. Prokopchuk has served in a department of the Russian Interior Ministry that has flooded Interpol with such requests. Interpol has repeatedly rejected warrant applications that it sees as fabricated or baldly political. Undeterred, Russia has sought more of a different type of warrant, known as a diffusion, which is circulated by Interpol but is not subject to its review.

In a telephone interview, Mr. Browder described Mr. Prokopchuk as a “nameless faceless bureaucrat” who takes orders directly from the Kremlin.

“I can’t imagine a more inappropriate person than a person who has been the architect of the abuse doled out to me by Russia at Interpol,” Mr. Browder said at a news conference in London on Tuesday. “This is a perfect way for Putin to basically breathe the fear of God into all of his enemies so they know they can’t even escape Russia if one of his guys is at the head of Interpol.”

As criticism mounted this week, Mr. Putin’s spokesman, Dmitri S. Peskov, denounced what he called “a particular kind of interference” in elections at an international organization, according to the Russian state news agency Ria Novosti.

The presidency of Interpol is in many ways a ceremonial position with little power to influence the issuance of warrants. Nevertheless, elevating a Russian in the face of such criticism would be a public relations coup for Mr. Putin. It would also be a setback for international lawyers, who have credited Interpol as taking steps in recent years to tighten administrative controls.

“If you have an organization where part of the job is to keep the chickens safe, and the head of the organization — O.K., he doesn’t really do much, but he’s a fox? It sends a message,” said Michelle Estlund, an American defense lawyer who tracks Interpol and its issuance of red notices. “They can say, ‘Don’t worry, the fox doesn’t really guard the hen house.’ But he’s there.”

The president is selected by the Interpol General Assembly, which is made up of delegates from its member countries. Each country gets one vote, there is no veto, and the winner must be carry two-thirds of the vote. Former colleagues say Mr. Prokopchuk, a current vice president, is regarded as well qualified, and members are encouraged to vote for the individual, not the country. 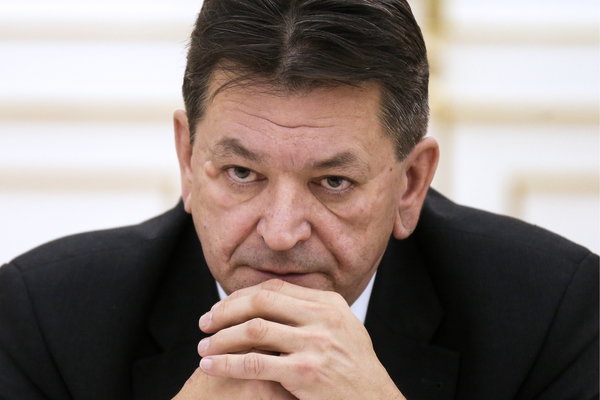 Mr. Prokopchuk, a university graduate who speaks six languages, does not fit the image that many foreigners — and many Russians — have of Russian police officers as boorish brutes. He is well spoken, highly educated and has a long record of pushing for closer cooperation between police services in Russia and the West.

American and European diplomats are backing Mr. Prokopchuk’s chief opponent, Kim Jong-yang of South Korea. American officials said they would not discuss their efforts, saying the vote would be carried out in secret.

But the deputy attorney general, Rod J. Rosenstein, addressed the Interpol conference this week and took aim at governments that provided safe havens to cybercriminals while trying to game the international warrant system — criticisms that the United States has had of Russia for years.

“We will continue to support legitimate investigations and prosecutions conducted by our Interpol partners,” Mr. Rosenstein said. “At the same time, we will expose schemes to manipulate the extradition process.”

Ronald Noble, who served for more than a decade as Interpol’s executive secretary — the agency’s senior operational position — said that institutional safeguards would prevent any president from politicizing warrants.

“In terms of the day-to-day operations of Interpol, it will have zero political impact,” he said. “Since Aleksandr is the only active police officer running for president, his election would prove that delegates were voting for the police professional and not against Russia.”

But Jago Russell, the chief executive of Fair Trials International, a rights group based in London, argued in a letter to Interpol this week that countries that meddle with the agency’s systems should not be rewarded with the presidency.

He said that was particularly true after the disappearance last month of Meng Hongwei, whose resignation was announced by Beijing but whose fate has never been explained. Interpol has requested more information from China but has generally declared his disappearance a local matter.

“It is our belief that his presidency and his recent ‘resignation’ have unfortunately undermined the organization’s reputation,” Mr. Russell wrote, referring to Mr. Meng.

Mr. Meng, who was also China’s vice minister of public security, vanished early last month during a visit from France, where Interpol is based. Several days later, the Chinese government produced a brief resignation in his name and said he had been detained on charges of bribery and other crimes. His wife, Grace Meng, has said those charges are politically motivated.

China has an opaque, highly politicized legal system — one that critics said should have given Interpol pause about making Mr. Meng president to begin with — and the government has provided few details about Mr. Meng’s whereabouts or the charges against him.

But Interpol said it had little choice but to let the Chinese process continue. Jürgen Stock, the agency’s secretary general, told The Financial Times that he had asked for more information. “But again, on the other hand, we also have to accept that China says there are investigations going on and they are deciding about the next steps,” he said.

Rutsel Silvestre J. Martha, a former Interpol general counsel who now represents Mr. Meng’s family, accused Interpol of rolling over for China in the face of violations of international law. In a telephone interview, Mr. Martha said the organization faced a crucial test that is larger than who wins the presidency, comparing it to Interpol’s darkest days, when Interpol allowed itself to be co-opted by the Nazis and then refused to help pursue German war criminals after World War II.