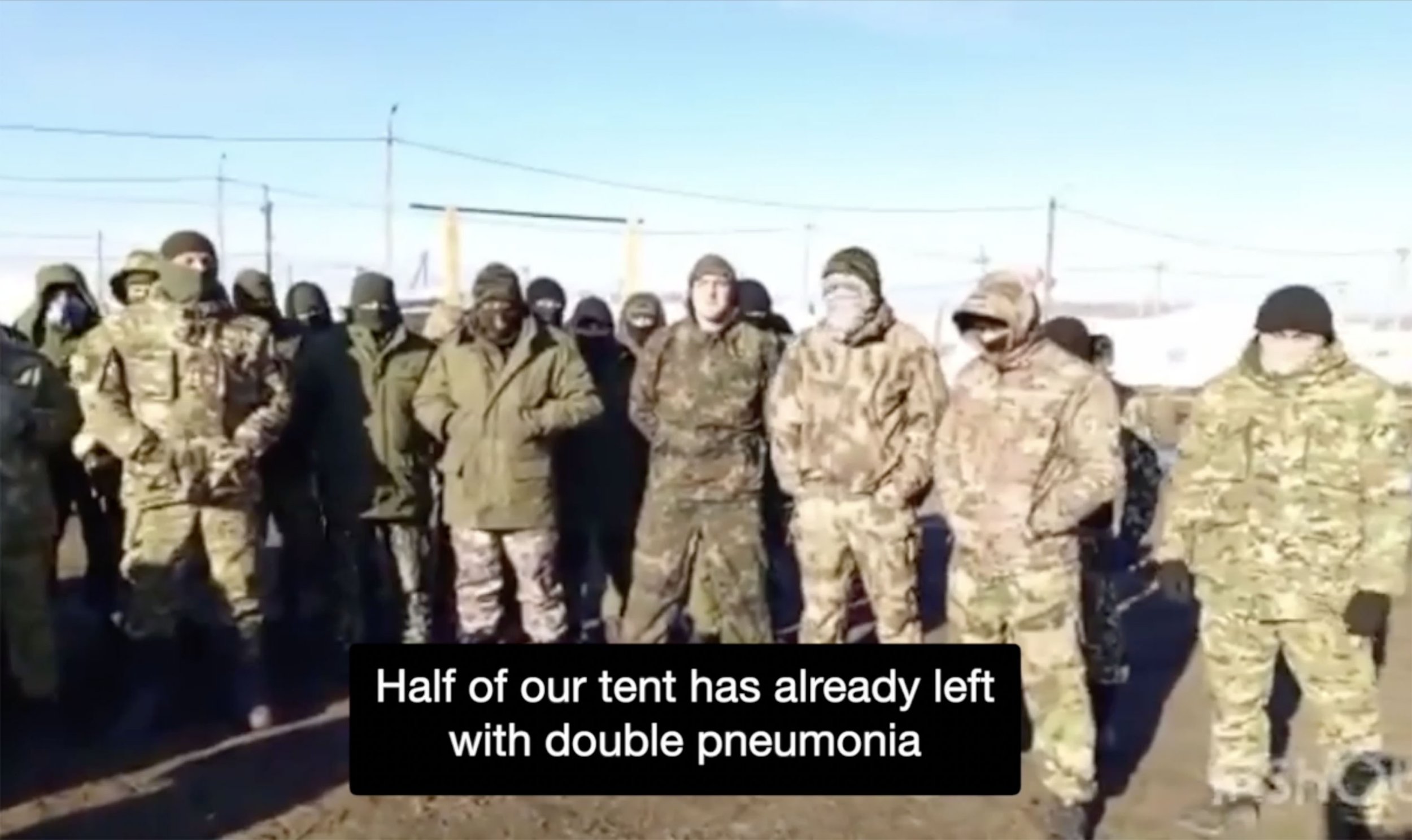 Newly-mobilised Russian conscripts have begged for supplies to keep warm after catching double pneumonia and bronchitis amid freezing conditions.

In a mutinous video, the desperate soldiers complained they were stranded and had no diesel for their military vehicles.

‘Give us some diesel,’ the men beg, reportedly from a training base in Siberia.

The conscripts are due to be sent to the war in Ukraine where Vladimir Putin has been accused of turning 300,000 reservist recruits into cannon fodder.

Russian defence minister Sergi Shoigu announced on Friday that the partial mobilisation of troops to fight in Ukraine was ‘complete’ and that the requisite number of recruits had been reached.

The new troops in the above video, from the oil-rich region of Khanty-Mansi, are the latest to mutiny against the Kremlin.

‘People are falling ill with pneumonia, all because of lack of diesel [for heating],’ says one fuming conscript,’ they said.

‘Why should we give money from our pockets?

‘Why do we have to pay out of our own pockets for this diesel to keep us warm?’

A mobilised soldier told how each day starts with commanders in Putin’s begging bowl army demanding the conscripts pay some £63 for diesel which is used for heating as well as to power tanks and armoured personnel carriers.

The troops claimed to suffer from double pneumonia and bronchitis due to the conditions at the training camp.

The news comes as Kremlin defence minister Sergei Shoigu told Putin this week that the ‘partial mobilisation’ of the Russian populace was complete.

‘The deployment of citizens called up for mobilisation was completed today’, Shoigu told Putin on Friday.

‘The conscription of citizens has stopped. The target you set – 300,000 people – has been met. No additional assignments are being planned.’

Among those conscripted, 82,000 will be sent to the frontlines in Ukraine, with around half of that number already engaged in battle, the defence minister said.

The remaining 218,000 troops are reportedly still undergoing combat training in places such as Siberia and will be deployed later this winter.

However, despite Putin’s promise that ‘partial mobilisation’ would conclude once the requisite number of troops had been conscripted, the president is yet to sign a decree terminating the order.

And an investigation from independent Russian outlet Mediazona suggests the real number of conscripts may be far higher.

By cross-referencing data from the registry office with info from the population census, the outlet calculated that by mid-October, at least 492,000 people had already been mobilised in Russia.

According to the data, the highest number of troops called to the frontlines have come from the east of the country, whereas St. Petersburg and Moscow have seen the lowest levels of mobilisation.

Elsewhere, reports have emerged of military enlistment offices arbitrarily drafting those with no military experience, people with disabilities and severe diseases, and fathers of three or more children – all of whom are all supposed to be exempt from service.

Meanwhile, the Kyiv Independant reports the Kremlin has evacuated over 70,000 civilians out of Kherson as Russia prepares its defences for a major battle in the occupied city.

Kyiv has hit back at the practice and condemned the evacuations as ‘forced deportations’.

Kherson is one of four partially-occupied regions annexed by the Russians, and has become the next major theatre of war following the successful Ukrainian counteroffensive in Kharkiv last month.