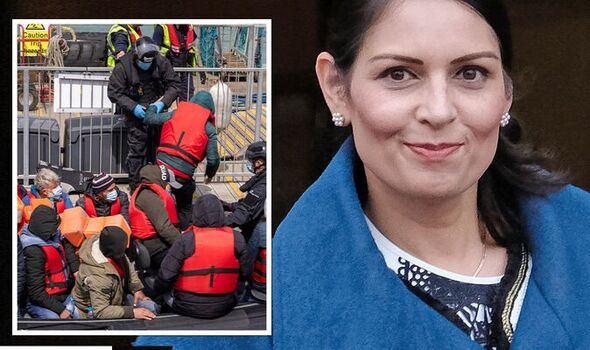 Court of Appeal judges rejected a last-ditch legal bid to block a flight due to relocate asylum seekers to Rwanda on Tuesday. The Public and Commercial Services union (PCS) and charities Care4Calais and Detention Action took the case to the Court of Appeal after the High Court ruled on Friday that the first flight to the east African country can go ahead.

Lawyers for the three groups and one person due to be removed are asking an interim block on removing those due on Tuesday’s flight until the full hearing of whether the policy is lawful next month.

Rory Dunlop QC, representing the Home Office, had told the court: “The flight tomorrow is important.

“This is a policy which is intended to deter dangerous and unnecessary journeys, journeys from safe third countries by people who do not need to make that journey to be safe, they can claim in France or wherever it is.

“This is a policy that if it works, could save lives as well as disrupting the model of traffickers.

“Even if we are just talking about cancelling a flight tomorrow, there is prejudice to the public interest, to the enactment of decisions that may have that deterrent effect.”

But Raza Husain QC, acting for the PCS and charities, told the court that the justice of the situation indicated that a general order should be made.

The barrister said the policy featured “a serious interference with basic dignity” and that the High Court judge had wrongly assessed the strength of their claim.

He said in written submissions: “The policy presently involves executive detention, forcible removal from the jurisdiction, transportation to a country from which they have not sought protection and to which they do not wish to go, in circumstances where the individuals concerned are exercising a legal right; and their removal is intended to deter others.

“This amounts, on any view, to a serious interference with basic dignity… where those individuals have already suffered significant trauma and have mental health issues.”

READ MORE ABOUT AN ENERGY GURU’S WARNING OVER LOG BURNERS

Mr Husain argued that the High Court judge who refused to block the flight on Friday, Mr Justice Swift, had wrongly decided the “balance of convenience”.

The High Court heard that UN refugee agency UNHCR has multiple concerns about the system in Rwanda, including discriminatory access to asylum, a lack of legal representation and other “deep-rooted structural problems”.

Mr Dunlop said on Monday: “The Secretary of State has listened and seriously considered the concerns raised by the UNHCR and has deliberately negotiated arrangements to provide assurances in relation to those concerns.”

The UK has agreed a deal with Rwanda to send some asylum seekers to the African country in return for an initial payment of £120 million along with added payments based on the number of people deported.

The Government says the deportation strategy will undermine people-smuggling networks and stemm the flow of migrants risking their lives by crossing the English Channel in small boats from Europe.

Human rights group say the policy is inhumane and will put migrants at risk. The UNHCR has said Rwanda, whose own human rights record is under scrutiny, does not have the capacity to process the claims.