The plane was travelling from London’s Stansted Airport to Norway’s main international this morning when crew were alerted to a security threat. Military aircrafts were scrambled to escort the plane to Norway, while the crew followed procedures. The plane has since landed safely at Oslo Gardermoen Airport and a man has been arrested by police.

Norwegian police said in a statement on Friday: “The plane has landed safely on the runway.”

They said the situation was under control and officers have arrested a 51-year-old British man on suspicion of being behind the threat.

He will be questioned as soon as possible.

Police said all passengers on the plane had now been evacuated and the aircraft would be examined by emergency authorities. 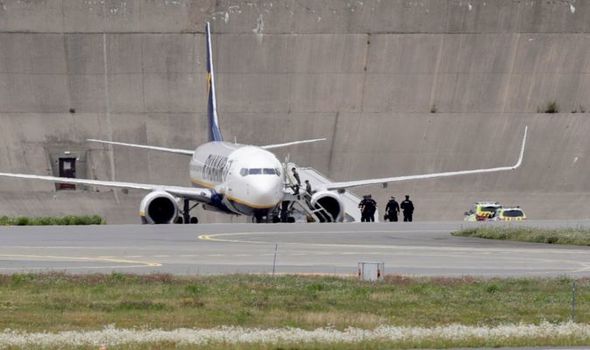 Ryanair said crew were alerted to the threat after discovering a note warning of a potential security threat on board.

The Captain then followed protocal and continued to Oslo airport.

A Ryanair spokesman told Reuters: “Crew on a Ryanair flight from London Stansted to Oslo today discovered a note that claimed there was a potential security threat on board.

“The captain followed procedures and continued to Oslo airport where the plane landed safely.

“Customers remained on board while authorities carried out a security search.”