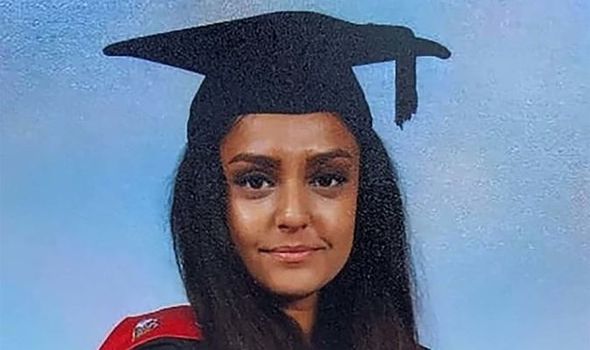 The 28-year-old was struck repeatedly with a two-foot weapon as she walked through a park near her home, it was alleged. Alison Morgan QC, prosecuting, told the hearing that popular Sabina’s exact cause of death has yet to be established.

She said the attack is said to have involved “extreme violence” but added: “Post mortem examinations are ongoing.”

Albanian garage worker Koci Selamaj, 36, has been charged with her murder in Kidbrooke, south east London on Friday September 17.

Selamaj, of Eastbourne, East Sussex, appeared before the court yesterday via videolink from detention at Wormwood Scrubs.

Wearing a green and yellow prison jumpsuit, he spoke through an Albanian interpreter to confirm his name and date of birth.

He indicated at a hearing on Tuesday that he intends to enter a not guilty plea to Sabina’s murder.

Ms Morgan said: “There is nothing to suggest the deceased and the defendant were known to each other.

On the evening of September 17, Sabina Nessa made plans to meet a friend at a bar called The Depot in Kidbrooke Village.

“In order to get to that location she took a route through Cator Park in Kidbrooke Village. She was attacked and killed in Cator Park.”

Judge Mark Lucraft QC, the Recorder of London, remanded Selamaj into custody until a plea hearing set for December 16.

Sabina was killed on her way to a date and her body was discovered in the park 24 hours later, covered with leaves.

Her murder has sparked a massive outcry from campaigners protesting about the soaring number of violent street attacks on women.

Hundreds of Sabina Nessa mourners attended a candle-lit vigil for the woman who taught year one pupils at Rushey Green primary, in Catford, south-east London.

The Duchess of Cambridge sent condolences to her family, tweeting that she was “saddened by the loss of another innocent young woman on our streets”.