Mr Javid will propose a new law that will raise the legal marriage age to 18 in England and Wales. Currently, teenagers aged 16 or 17 can legally get married with their parents’ permission, but Mr Javid says that this is a form of child abuse.

Speaking on Sky News, the former Home Secretary said: “Why do I want it increased? Because child marriage is child abuse. I think it really is as simple as that. There is no good reason to marry a 16 or 17-year-old.

“People often talk about child marriage in developing countries, but it is happening right here in our country. It has been allowed by the law for decades and we have to put an end to it.” 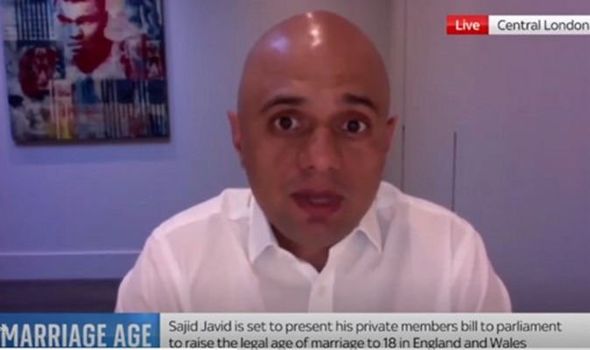 A spokesperson for Barnardo’s added: “Raising the legal age of marriage will help prevent coerced and forced marriage amongst children and send a clear message to the rest of the world. This is why Barnardos supports Sajid Javid’s efforts to get the Govt to change the law.”

Member of the House of Lords, Baroness Meral Hussein-Ece, said: “Excellent. We have been campaigning to raise the legal age to 18 in line with many progressive countries for some time #endchildmarriage.”

Writing in The Times, Mr Javid said that those who marry under the age of 18 “are rarely lovestruck teens”.

He said: “They are overwhelmingly young women who have been coerced into marriage for cultural or religious reasons.

“When Bangladesh lowered the legal age of marriage from 18 to 16, ministers there were said to have directly pointed to our laws to justify their move. It’s clear that we must legislate to close this loophole so that vulnerable children cannot be pushed into such serious and life-changing commitments before they are ready.”

Mr Javid, who is of Pakistani heritage, added: “I’ve seen this myself in the community I was raised in, young girls expected to enter into marriage far before they were ready to, with painful consequences. Let’s call this what it is: child abuse.”

The Ministry of Justice is supporting Mr Javid’s proposal and the Government is expected to make time for it to be debated in Parliament, which means it is likely to become law.