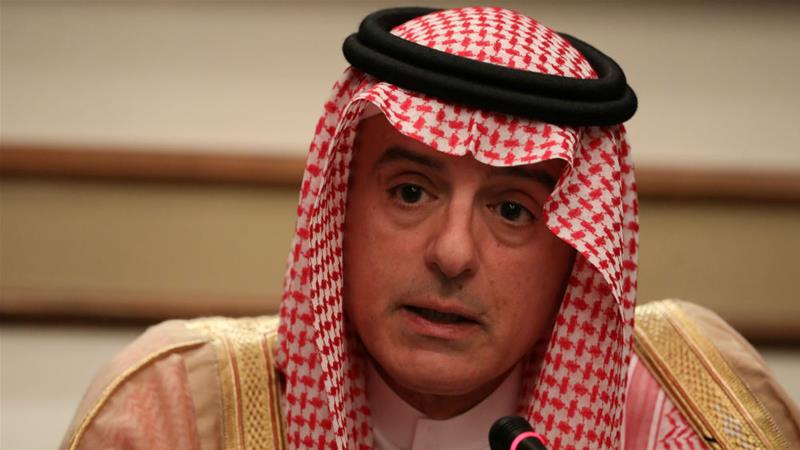 Saudi Arabia has expressed concern over a British court ruling that temporarily suspended new weapons sales to the kingdom, saying the move would only benefit its regional rival Iran.

Adel al-Jubeir, Saudi state minister for foreign affairs, made the remark after England’s Court of Appeal on Thursday judged the British government had broken the law by allowing arms sales to Riyadh that might have been used in a devastating war in Yemen.

The ruling – which Prime Minister Theresa May has already said the government would appeal – does not halt Britain’s arms exports but means the granting of new licences will be paused.

Al-Jubeir told reporters in London the ruling did not find any “wrongdoing” and insisted the Saudi-led coalition’s deployment of weapons in Yemen was legitimate.

The Western-backed coalition intervened in the impoverished country in 2015 to restore the internationally recognised government of President Abd-Rabbu Mansour Hadi after Houthi rebels seized the capital, Sanaa. The United Nations has described the conflict in Yemen, which has killed nearly 100,000 people, as the world’s worst humanitarian crisis.

“The decision by the court in the UK has to do with procedures for licensing, not any wrongdoing that took place,” al-Jubeir said.

The coalition and the United States accuse Iran of arming the Houthis, but Tehran denies the claim.

The court’s ruling came amid a surge in Houthi attacks on Saudi Arabia, including drone and missile assaults on airports and oil facilities. The raids have also added to tensions in the Gulf, where the US and Iran have been locked in a standoff over Tehran’s nuclear and ballistic missiles programmes.

The UK’s arms sales to Riyadh have significantly bolstered the Saudi air force’s capability to carry out air attacks in Yemen. The final six Typhoon jet fighters of 72 ordered in 2007 were delivered in 2017.

The following year, Riyadh signed a memorandum of intent to buy an additional 48 Typhoons.

The legal action against the British government was brought by the Campaign Against the Arms Trade, which has accused it of licensing arms sales despite a clear risk their use could breach international humanitarian law.

Britain-based weapons manufacturer BAE Systems said it would continue to support the government in the agreements it had made with Saudi Arabia.

“We continue to support the UK government in providing equipment, support and training under government-to-government agreements between the United Kingdom and Saudi Arabia,” BAE Systems said in a statement.

“We will assess the result of the UK government’s reconsideration of its decision-making on the basis set out by the court, once it has been made,” it said, adding it complied with all relevant export control laws.