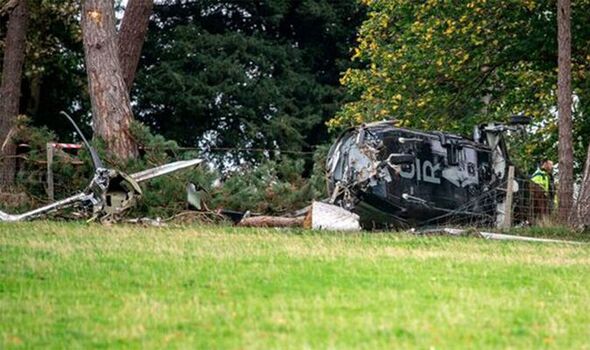 Dramatic pictures have emerged of a helicopter which crashed in Wales last night, resulting in four people being taken to hospital.

The incident, which triggered a large-scale emergency response, happened near Llanelidan, Ruthin, in Wales at around 5.30pm yesterday.

Today a police car and officer were spotted at a driveway with the downed black aircraft, in the background, clearly damaged following last night’s incident, which saw a large emergency response. It was lying on its side with what appears to be a rotor section apparently broken off.

An investigation has now been launched by the Air Accidents Investigation Branch [AAIB], reports NorthWalesLive. A spokesperson for the AAIB said: “An accident near Ruthin, North Wales involving a helicopter has been notified to the AAIB.

“An investigation has been launched and a team of inspectors are at the accident site.” Following the incident, a large emergency service presence was seen in the area.

The coastguard rescue helicopter was seen circling the scene before heading back to its base in Caernarfon. It is believed none of the occupants of the chopper have sustained life-changing or life-threatening injuries, but have been taken to hospitals across the area for further check-ups.

North Wales Police said yesterday they were called at 5.36pm “to reports of a helicopter crash in woodland near Llanelidan, Ruthin”. Chief Inspector David Cust said: “Officers attended alongside colleagues from Welsh Ambulance and North Wales Fire and Rescue as part of a joint emergency response.

“All the occupants have been accounted for, with four people having been taken to hospitals across the area. None of the injuries are thought to be life threatening or life changing at this time.”

A North Wales Fire and Rescue Service spokeswoman confirmed they had six fire appliances at the scene. There were four engines from Deeside, Bala, Corwen and Ruthin, alongside a narrow access vehicle from Denbigh and a technical rescue unit from Wrexham.

They mainly assisted with checking casualties. The Welsh Ambulance Service has been approached for further information.