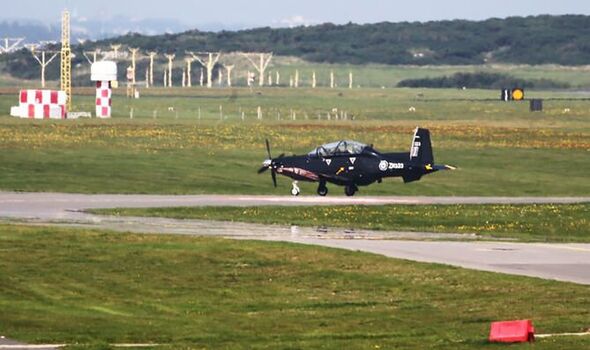 The MOD said that restricting aircraft flying over UK schools for two months would cause a “serious impact” on national security training. This comes in response to a headteacher and politician’s appeal to reduce the number of Royal Air Force (RAF) planes on exercise while pupils sat their GCSEs.

Mrs Saville Roberts had asked the MOD if it was possible to reduce the number of low flying Texan aircraft in the vicinity of the Llŷn Peninsula school near Abersoch.

Mr Minnice had called for planes to avoid exercises around the school for a period of about four hours a day over a four week period, while Year 10 and 11 pupils sat their final GCSE exams which could “have an impact on their futures”.

“But we do understand the importance of RAF exercises, especially with the current situation in Europe,” he said.

Mrs Saville Roberts had urged the MOD to be “mindful” of the impact these operations had on local communities and to “enact measures to mitigate disruption where possible”.

Responding to their pleas, the MOD told the Local Democracy Reporting Service, that the “essential skills” currently being used each day protecting NATO airspace in the Ukraine crisis could only be maintained through training and practice in a “realistic environment”.

A spokesperson said: “We are keenly aware of the importance of examinations for students across the country.

“Unfortunately, restricting military aircraft activity for two months near schools across the whole of the UK would have a significant impact on defence’s ability to train those upon whom we rely for our national security.

“Training is strictly limited to what is absolutely essential for aircrew to achieve and maintain operational effectiveness.”