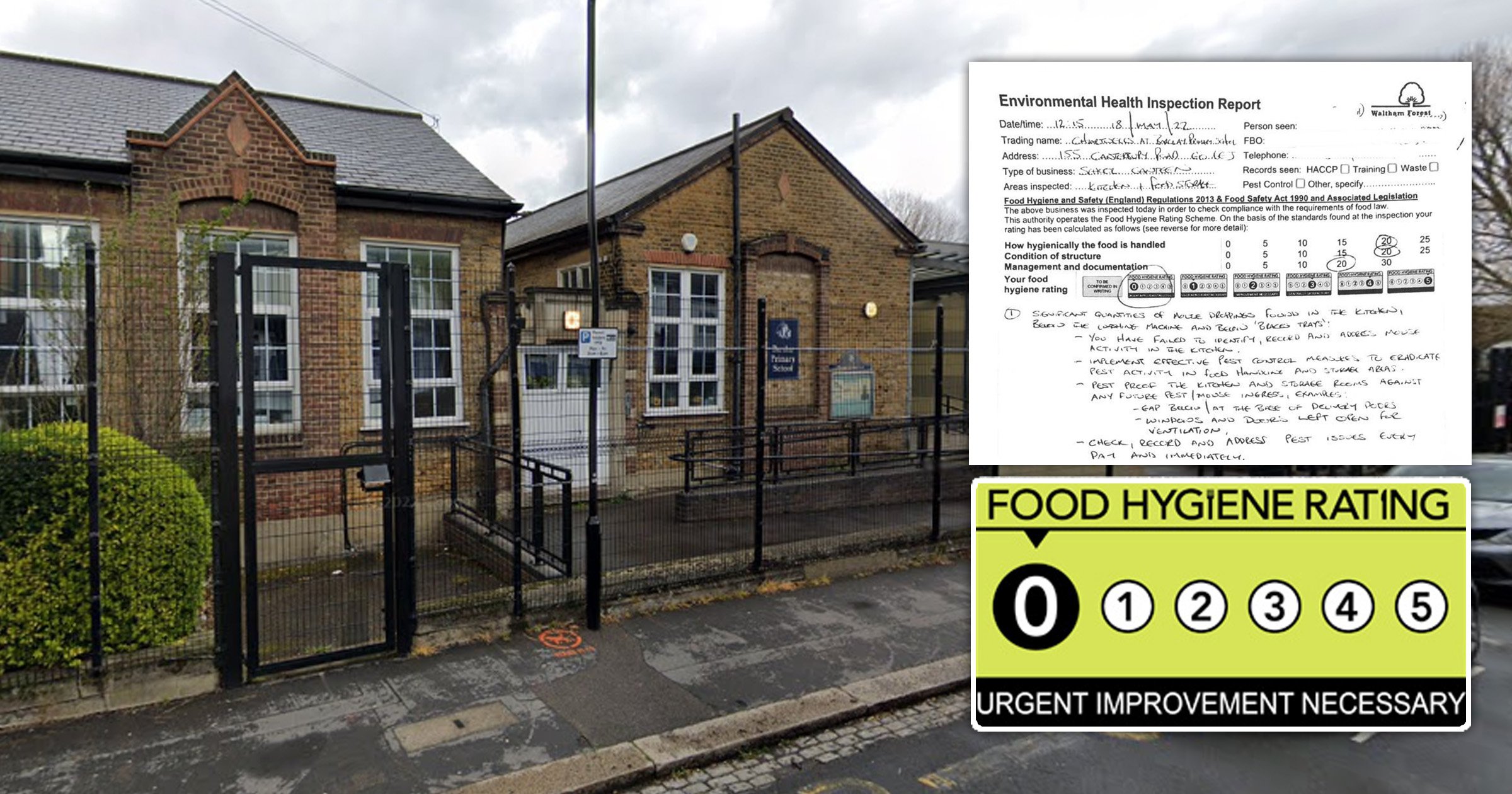 A national catering firm was given a zero-star food hygiene rating after ‘significant quantities’ of mice droppings were found at a school.

Chartwells was told to make ‘urgent improvement’ after the rodent activity was discovered at Barclay Primary School in Leyton, east London.

An environment health officer (EHO) found that the catering giant had ‘failed to identify, record and address mouse activity in the kitchen’.

The inspection of the kitchen and food storage areas resulted in the rock-bottom rating under the ‘scores on the doors’ system.

Chartwells, which was at the centre of an outcry over free school meals last year, said that Barclay had encountered an ‘isolated’ problem and 98% of its schools operations are rated four or the maximum five stars.

In the report, the inspector said that ‘significant quantities of mouse droppings’ had been found during the visit on May 18, 2022.

The document states: ‘You have failed to identify, record and address mouse activity in the kitchen. Implement effective pest control measures to eradicate pest activity in food handling and storage areas. Pest proof the kitchen and storage rooms against any future pest/mouse ingress.’

The UK’s biggest schools caterer was also told to provide a daily allergen sheet, keep labels with ‘decanted’ food such as bread and to store probes in a clean container and not alongside stickers, candles and lighters.

In further handwritten recommendations, the operator was told to keep raw meat and fish below other food in the freezer on a shelf marked ‘raw only’.

The inspection report was released by Waltham Forest council after a Freedom of Information Act request by Metro.co.uk.

The official told the school, in Canterbury Road, to ‘check, record and address pest issues every day’, including by sealing a gap at the base of delivery doors and closing windows and doors left open for ventilation.

Chartwells came under fire in January 2021 over claims it had let down impoverished families and the taxpayer by supplying disproportionately small free school meals packages.

After a national outcry which began on Twitter, the caterer responded by saying its food parcels had a ‘wide variety of nutritious food items’ and it was ‘further enhancing’ the contents.

In its response to the rating, which was live on the Food Standards Agency’s (FSA) website as of September 2, 2022, the caterer said: ‘Regular pest inspections are carried out at the school by a qualified pest contractor, the latest of which occurred one day prior to the EHO [Environmental Health Officer] visit and found no evidence of pests.

‘However, the EHO visit revealed old mice droppings beneath the washing machine, as the heavy equipment had not been pulled out to clean behind.

‘The pest control contractor later confirmed that they were old droppings and there was no infestation.’

The contractor, listed under the name Chartwells at Barclay Primary School, then attended the school every day for 20 days following the inspection and the pest-proofing recommendations were completed, according to the response. There were no further signs of pests.

In the response on the FSA website, Chartwells continued ‘There were no poor standards of cleaning highlighted by the officer in any other area of the food production premises.’

A spokesperson for the caterer said: ‘Food safety and hygiene is always our number one priority – 98% of our schools have a 4 or 5-star hygiene rating.

‘We have tackled the isolated issue raised, retrained our team, and look forward to welcoming back the EHO as soon as possible.’