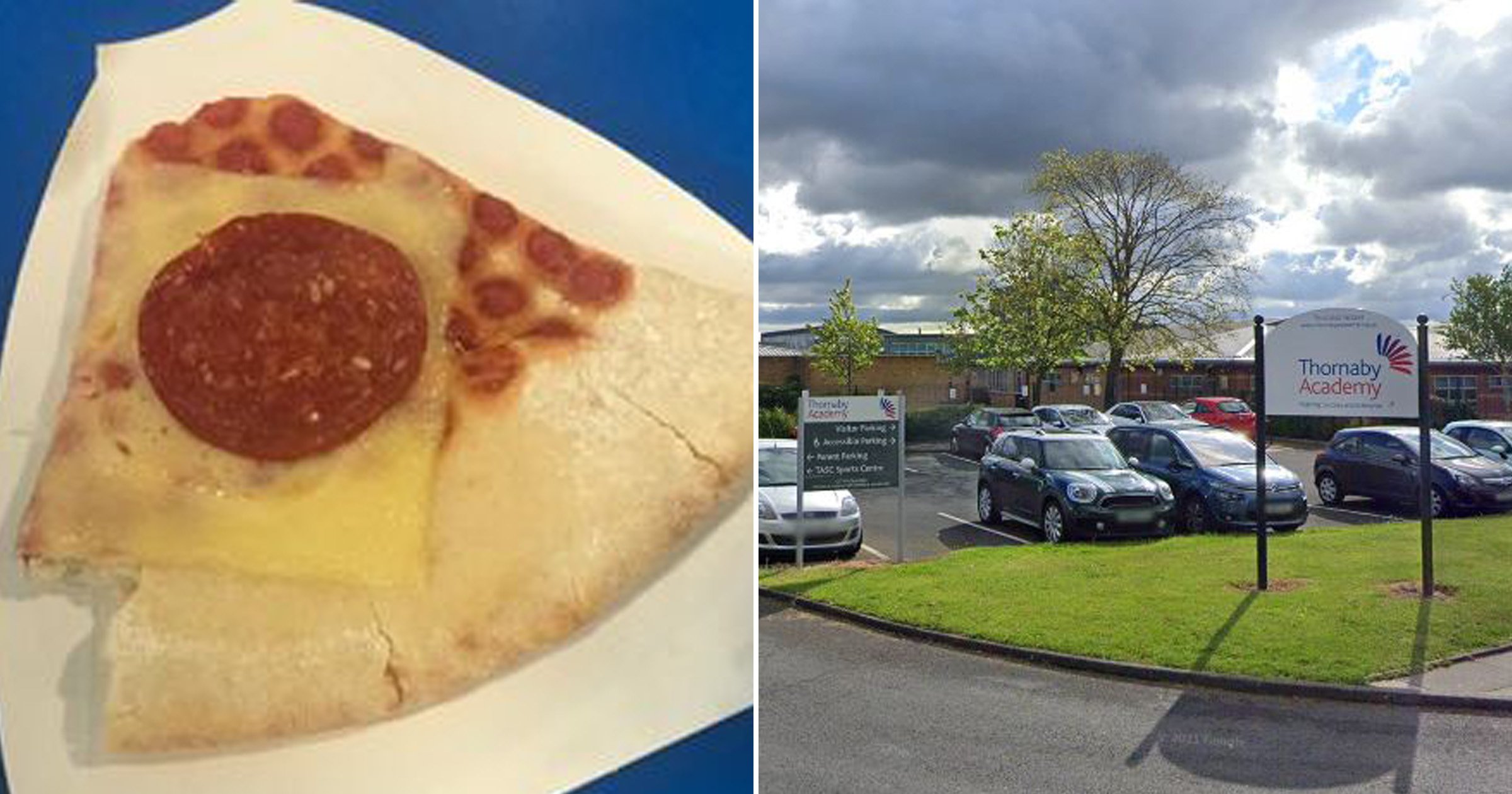 A Yorkshire mum has slammed a ‘sad’ slice of ‘cardboard’ pizza and ‘tiny dessert’ served to her child for her school dinner.

The woman claimed the school on Baysdale Road, Thornaby is charging too much for its meagre lunch portions, and claims its actions are ‘contrary’ to its ethos of putting children’s welfare first.

Posting a picture of the pizza, she wrote: ‘This monstrosity is what Thornaby Academy thinks is suitable to serve the kids at £1.65 a slice.

The mother was already aggrieved with the school after they forced her to fork out over £100 due to their strict uniform policy.

‘We were actually howling at how bad [the dinner] was,” the mum told Teesside Live, ‘I thought ‘what on earth are you feeding these kids for £1.65?

‘A sad-looking slice of pizza that looks more like cardboard. People were saying “Is that a little bit of bacon on the dessert” but it isn’t, it’s a tiny slice of strawberry.

‘They put a post on saying the dinners would be much better than last year. I just keep thinking “what delicacy are they going to come up with today?”’

This isn’t the first time the academy has been accused of putting profit before wellbeing, with the mum explaining how their strict adherence to a rigid uniform policy left her daughter in ‘agony’.

‘My child has a problem with her joints,’ she said. ‘She’s been referred to the musculoskeletal department. I went in and explained to the school, I said she needs some sturdy shoes that she can put insoles in.

‘They wouldn’t let her wear trainers until she got a note, which was going to be a week away. A brand new pair of shoes I bought for her didn’t fit, they gave her blisters.

‘So I sent her in black Converse trainers for one day. Three different teachers took her out to have a go at her.’

The mum says she was forced to buy another pair of shoes, which could only be worn without insoles.

‘Not only did she have blisters, she had to wear these flat shoes because they wouldn’t let her wear her Converse. It’s affected her feet and hips again. The poor kid was in agony.

‘I don’t drive, so she had to walk there and back, and walk round school all day. Finally, we got the note and I had to buy another pair of shoes.

‘If kids can’t afford the uniform at the minute, there should be some leniency – I would’ve expected that. But sadly not. The school prides itself on putting their children’s welfare first, well this is all contrary to that.’

A spokesperson for Thornaby Academy responded to both the pizza slice and uniform issues raised.

The spokesperson said: ‘Whilst we would not make a comment on individual cases, the academy has a clear uniform policy in place. We believe that the wearing of uniform plays a valuable role in contributing to the ethos of the academy and in setting the tone for our work with students.

‘We aim to ensure that our policy is fair and reasonable and that school uniforms are affordable and sustainable, especially in the current financial climate. We provide free school uniform for all Year 7 students when they start at the academy, as well as providing a pre-loved uniform scheme. We hold a stock of other uniform items, including school shoes, to support our students and their families.

‘The academy is disappointed to learn of a possible issue regarding its new catering supplier Mellors, as this matter had not been raised directly with the school. The academy has a clear policy on the use of mobile phones by students during the day which are not allowed.

‘Thornaby Academy takes standards of school catering and compliance with food school standards seriously and will be investigating the matter in conjunction with the caterers. Mellors however, have already apologised unreservedly.’