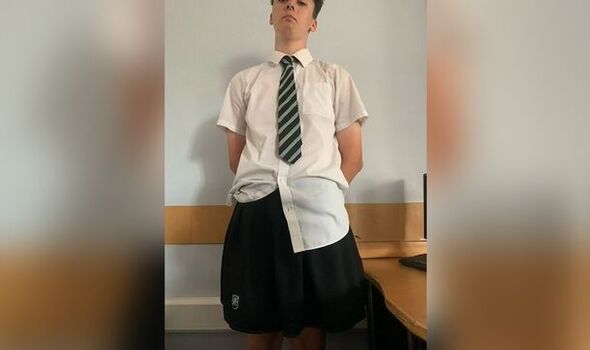 The boys claim they were dragged out of class and forced to wear long trousers after they turned up wearing shorts without the school logo. However, the students came up with a creative solution and changed into skirts they found in the school’s uniform store.

One parent said she was furious when her 14-year-old son inundated her with “floods of texts” after he was ordered to change out of his own shorts into a pair of borrowed long trousers which were too small and too tight on the hottest day of the year.

The school uniform store had run out of stock of shorts with the school logo.

Year 9 pupil Alfie Matsell, 14, was one of the Teignmouth Community School “boys in skirts”.

After his mum rang to complain she had a call back from the head of year saying “It’s all sorted now – he’s wearing a skirt'”. 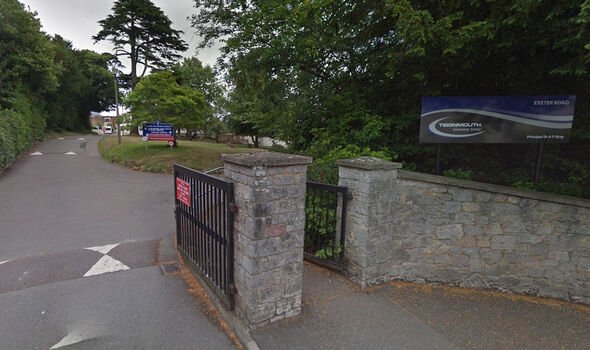 “The only items to be worn on the ‘bottom half’ are smart black school trousers, the school shorts with logo, or the school skirt with logo.

“These options are open to all students in years 7 to 11 all year round.

“During the last few days, due to the hot weather, students were permitted to leave their jumpers, blazers and ties at home. All other uniform regulations stayed in place.

“The result of this is that all students wore an open collar white school shirt, one of the above options, and their school shoes.”

Mum-of-two Bonni Matsell, who runs her own nail salon in Dawlish, Devon, said: “The school are very strict. We had an email saying they had relaxed the rules with all the hot weather – they didn’t have to wear ties and they could open the top button of their shirts.

“On the hottest day I sent my son into school in smart, new black shorts.

“They collared him and took him straight out of his lesson and made him wear a pair of trousers that were much too small and too tight.

“He was texting me floods of messages from the toilets because he was so upset about it.

“I was absolutely furious and I’m normally a very laid-back, chilled person.

“I phoned the school and asked what on earth was going on and asked the head of year to call me back and explain – wearing long trousers that are too tight in that weather was not right.

“Why would you want any student to overheat in a classroom with no air conditioning.

“Potentially they could collapse from the heat and I said ‘I’m not having that – let him wear shorts or I am coming to collect him’.

“The school rang me back and said ‘It’s all sorted now – he’s wearing a skirt’. And he wasn’t the only one.

“There’s a group of Year 9 who did it to make a point. I laughed and said ‘Good on them’.

“Apparently the head of Year 9 and the head teacher OK’d it.

“The school are very hot on gender neutrality and so skirts were allowed because they are part of the official uniform policy.

“Apparently about six of them who were all in trouble went to the uniform shop and borrowed the skirts and gave them back at the end of the day.

“Alfie is a good student and he’s just had a fantastic end of year report – he’s very quiet and the idea that he would do this blew my mind.

“Alfie came home and said it was a really fun day at school and everyone was cheering them on and his girlfriend thought it was funny too.

“The following day I sent him in his PE shorts and sent an email saying ‘Under no circumstances do you put trousers on my son’.

“The problem was that they can only wear the school shorts with the school logo – but they don’t have any in stock.”