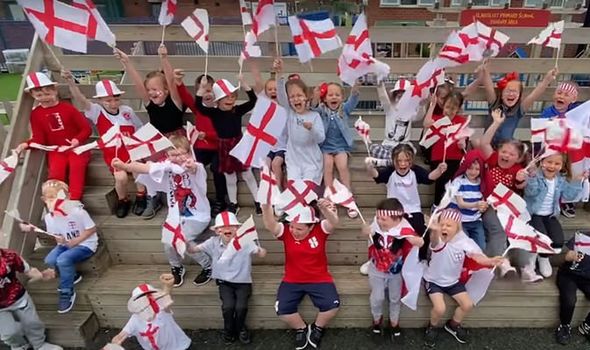 Critics say Flakefleet Primary School in Fleetwood, Lancashire, were “bullied” into removing from its Twitter page by “woke zealots”. Stephen James, a teacher at another school, encouraged other Twitter users to fight the “war on woke”.

The school filmed its own version of Fat Les’ chart hit Vindaloo, which was recorded for the 1998 FIFA World Cup, and the uplifting clip featured its children as young as five dressed up and waving St George’s flags, ahead of tomorrow night’s semi-final against Denmark at Wembley.

But the video sparked a huge backlash with web users, including parents, calling the idea “mindless hooliganism”.

One parent, who describes himself as a “father and council candidate”, tweeted: “It’s disgusting behaviour these children are being pressed to participate in by the school.

“I have a seven-year-old child. I absolutely do not want her to be exposed to this kind of mindless hooliganism.”

Another added: “Poor kids, already brainwashed. A sea of aggressive white faces. Is that global Britain?

“Just check the amazing English team and learn from it…” 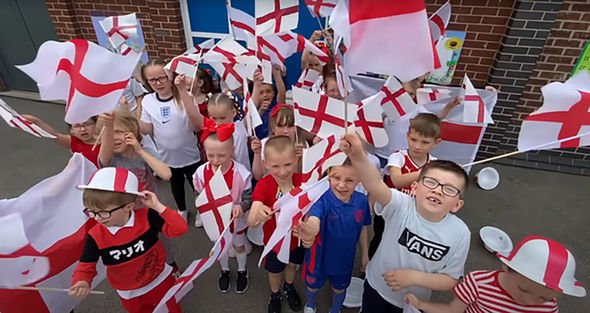 Headteacher Dave McPartlin posted: “There are times that social media can be amazing and make such brilliant things happen, but it can also be a dark and disturbing place that really makes you question the direction society is heading.”

After reinstating its Twitter account, the school tweeted: “We’ve been a bit freaked out by all the extra interest in our football video, the support is overwhelming.

“We all had such fun making it and are glad we’re making so many people smile! Thank you everyone.”

Cat Smith, who has been Labour MP for Lancaster and Fleetwood, said: “Having visited Flakefleet School last week I can tell you it’s an exceptional primary school under strong leadership and they consistently inspire the young people who are lucky enough to attend.

“One of the nicest things the school does, which gives the public insight into what they do, are these videos with the children around current events.

“I loved the football video and being a huge England fan myself I can say I think it might actually be coming home this year – what more inspiration can these children get?”

And Mr James, the chairman of Folkstone and Hythe Conservative Association, tweeted: “WAR ON WOKE in Education! A Primary School has been bullied into taking down this brilliant video of children supporting the @England Football Team because it was branded ‘hooliganism’ by Woke zealots.”

Toby Young of the Campaign for Free Speech Movement, said: “Are there no depths to which these finger-wagging killjoys won’t stoop?

“I daresay that if these children had painted their faces with the flag of the European Union — or the Danish flag — the same scolds would have congratulated the school on teaching the children a valuable lesson about the international brotherhood of man.”

Rob Halfon, the Tory MP for Harlow in Essex, blasted: “It’s appalling and wokery gone mad. The video is brilliant and I hope it goes viral and gets to number one.”

Flakefleet Primary School, rated as Good by Ofsted, hit the headlines after its choir reached the final of Britain’s Got Talent.