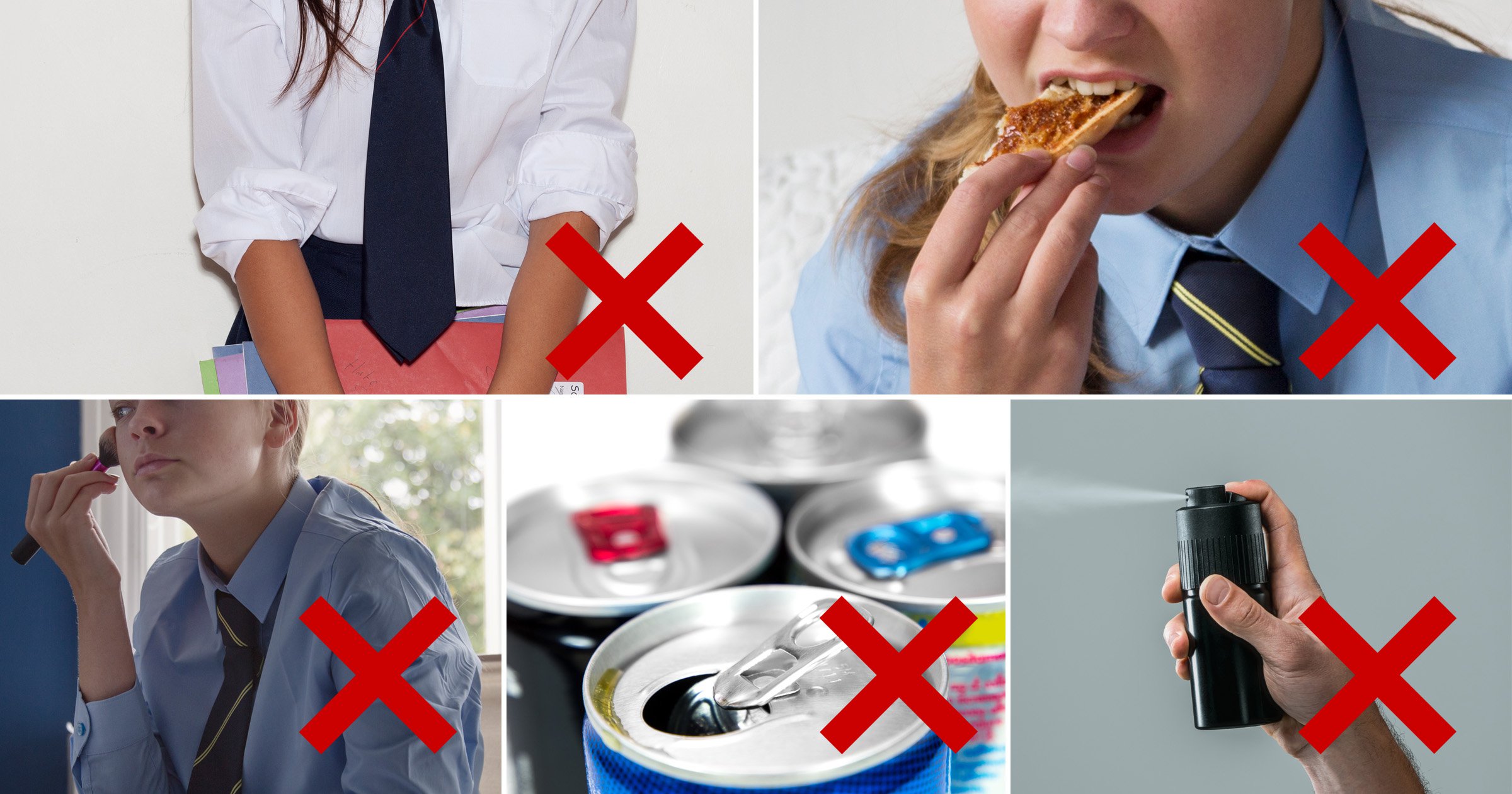 Persistent eye-rolling and huffing will be punished by a school as part of a series of new rules which have been likened to a ‘military camp.’

Rolling up blazer sleeves, forgetting to bring a ruler, drinking fizzy drinks and spraying deodorant are all banned as part of the strict doctrine of behaviour issued by St Benet Biscop Catholic Academy, in Bedlington, near Newcastle.

Parents have hit out at the ‘excessive’ regulations, saying they have left pupils ‘petrified’ to go to class – and one has already decided to take her son elsewhere.

Another mum said the list is longer than the rules used in nearby Durham Prison, where Moors murderers Ian Brady and Myra Hindley were housed.

The controversy started this week when the school emailed parents with the new ‘positive and negative’ behaviour charts being used for the new term.

Similar charts have been in place previously to reward good and bad behaviour but they’ve now been updated so that teachers are quicker to give out detentions.

The long list of negative behaviour which will result in an automatic 30-minute detention includes: drinking carbonated drinks, spraying aerosol, chewing gum, wearing makeup, being late to class or school, forgetting equipment such as a PE kit or ruler, shouting in the corridors, wearing inappropriate trousers, rolling up blazer sleeves, eating in class and incomplete or poor quality homework.

Negative behaviour which students will receive a warning for first, followed by a detention if they repeat the behaviour, includes talking during silent time, not doing as asked or following a instruction, poor effort/work rate and rolling eyes or huffing.

Parents say the rules have created a culture of fear at the school, with pupils terrified that the slightest mistake will land them in detention.

Melanie Burns, who has three children at St Benet Biscop, believes the school’s rules are doing more harm than good.

She said: ‘Both of my children in Year 11 have additional needs including autism, ADHD and one also has a learning disability. It’s scary sending my children into that school and not knowing if they will be punished for things which they can’t help doing.

‘I feel really disappointed and let down as a parent by the school’s stance on how quickly they are giving out detentions to pupils for minor things.

‘It’s like I’m banging my head against a wall trying to get my kids what they need, which is better support and understanding for their individual needs, but instead its like the school has become a military camp with these ridiculously strict rules and harsh punishments for not following them.’

Melanie, whose youngest child started in Year 7 at St Benet Biscop in September, said her children were ‘petrified’.

‘My youngest has just started school and she doesn’t want to put a foot out of line,’ she said. ‘She goes great in all her classes and is really willing to learn. But she’s been near tears before over getting a detention for apparently not having the right school shoes, which isn’t her fault, it’s mine.

‘In my opinion, after the year the children have had dealing with the pandemic and school closures, they should be eased back into education, as many will have struggled with the change.’

Another parent, Carman Straughan, said she has spent over £800 on school uniforms in total, after confusion over whether her daughter’s trousers would be classed as too tight.

‘Children are all different shapes and sizes, and it’s ridiculous to threaten a child with a detention if their trousers are too tight and deemed distracting to others,’ she said.

‘It feels like these rules for girls are from 60 years ago. I have a friend who works in Durham Prison and he told me that place has less rules than St Benet Biscop does.

‘The fear of getting a detention hangs over my children, and it’s destroying their mental health.’

Another parent, Gemma Priest, took her son, 13, out of the school because she said his mental health had been ‘greatly affected’ by the chart system.

She said: ‘As a parent you just want your son to be happy, and he hasn’t been recently because he tells me he feels like everyone is always coming down on him at school and his head can’t take it anymore.

‘He’s been in trouble for using his mobile phone to text me, for mouthing something to another child who was distracting him and forgetting his equipment.

‘It feels like he can’t make even the slightest mistake like forgetting his PE kit without being dished out a detention, and it’s impacted his mental state greatly.’

The school’s headteacher, Kevin Shepherd, refused to apologise for the strict rules, saying there were necessary to ‘nurture a sense of moral purpose, personal responsibility, integrity and respect for others.’

‘It is expected that all members of our community follow the St Benet Biscop way. We accept no excuses,’ he added.

‘Whilst sometimes this may be challenging, we expect our students to live by our learning habits 100% of the time. These include no answering back, and perfect uniform because we want children at our school to be proud, and excellent uniform is a representation of our excellent culture.’

Mr Shepherd said it was ‘important that students are taught how to be organised and responsible’ including being punctual and carrying the right equipment.

He said he wants staff time to be spent on planning high quality lessons, rather than discussing ‘incidents where students have not followed our learning habits.’

The school insisted children are supported on an individual basis and ‘reasonable adjustments are made to the detention system as and when are necessary, depending on the circumstances.’

Schemes are also available to offer support to families who are struggling financially to buy school uniforms for pupils.