After six years, three consultations, two days of parliamentary debate and one inquiry, MSPs passed the legislation in a 86-39 vote today.

The Gender Recognition Reform bill makes the way a trans person changes the sex marker on their birth certificate simpler, quicker and fairer.

Now, the minimum age someone can apply for a gender recognition certificate (GRC) will be lowered from 18 to 16.

Trans people will also no longer need a medical diagnosis of gender dysphoria.

The time required for an applicant to prove they have lived in their ‘acquired’ gender has also been cut from two years to three months – or six months for those aged 16 and 17.

The bill, which passed its first vote in October, amends the UK’s Gender Recognition Act (GRA) 2014.

This means Scottish gender recognition law is at odds with the rest of the UK, where such restrictions remain in place. 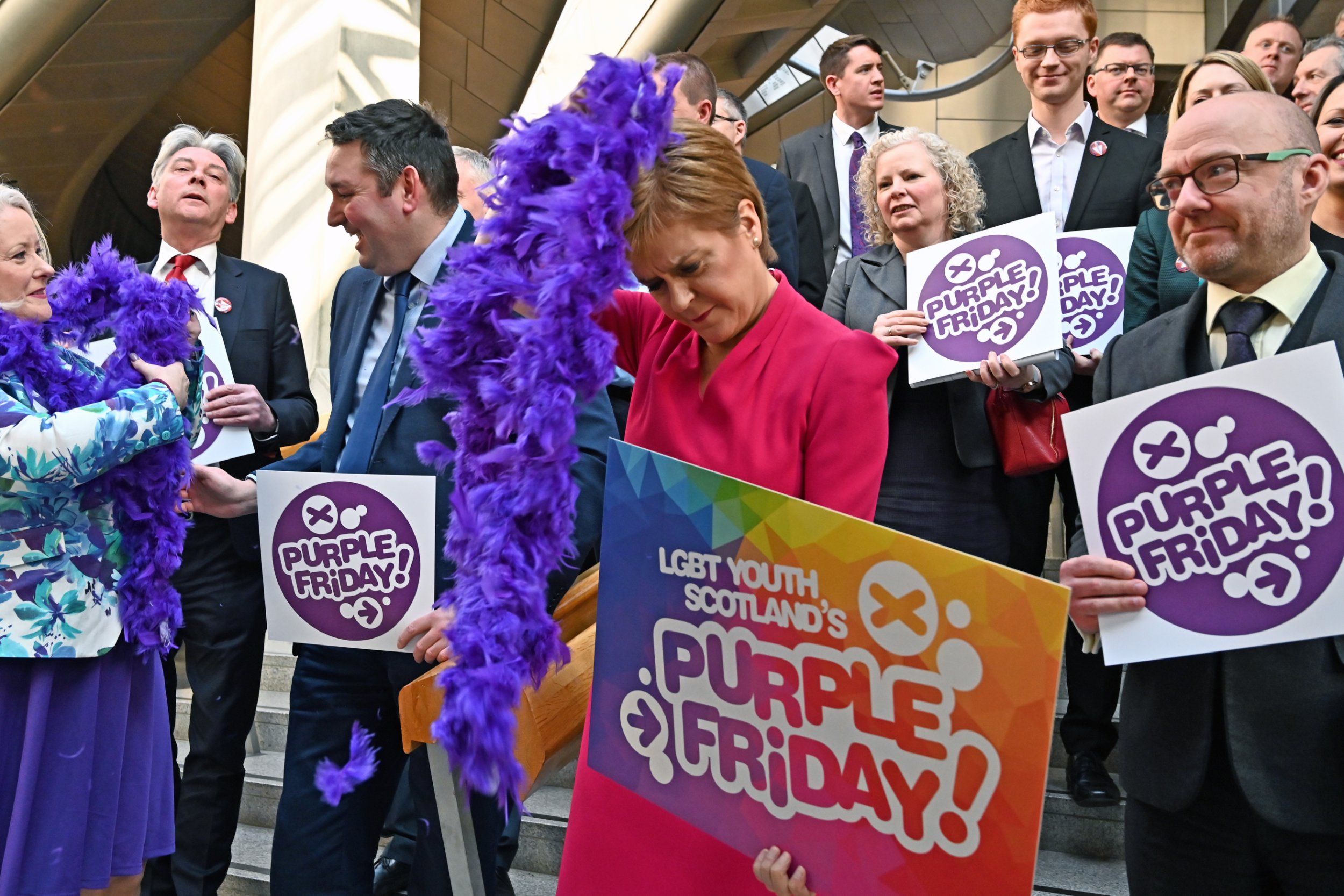 These reforms weren’t without controversy, however. Anti-trans groups, some women’s fights campaigners and conservative MPs felt overhauling the GRA could lead to the removal of single-sex services and spaces.

Though, these are both protected by the Equality Act 2010 – the GRA reforms won’t change trans people’s existing rights to access them, either.

While the Equality and Human Rights Commission, an equality rights watchdog, said in April it is already lawfully possible to exclude trans people from such services to achieve a ‘legitimate aim’.

More than 150 amendments were tabled, with the Scottish Conservatives seemingly stretching processings as long as possible.

The first sitting on Tuesday spilt beyond midnight, while the following concluded 1:15am Thursday.

But in today’s final vote, the legislation received backing from many in the Scottish National Party (SNP), Greens, Labour and Liberal Democrats.

In a statement, LGBTQ+ charity Stonewall said: ‘This is a victory for trans and all human rights in Scotland.’

Mermaids, a trans youth charity, added that the law passed thanks to ‘six years of tireless, impassioned work by Scottish campaigners’.

Self-declaration, sometimes known as self-ID, refers to the idea that people are the gender that they say they are without the need for medical requirements.

‘This is a historic victory in the fight for equality that will transform the lives of trans people in Scotland – including introducing self-declaration and lowering the minimum age to 16,’ the group said.

Scottish Greens equalities spokesperson Maggie Chapman MSP said: ‘This is a small but significant change that will make a big difference – it is a truly historic day for equality.

‘Trans rights are human rights and I am proud that our parliament has voted to bring Scotland closer in line with best international practice while improving the lives of our trans siblings.’

Felix Fern, the co-founder of Trans Activism UK, hopes that the rest of the UK might soon follow Scotland’s lead.

‘Contrary to popular belief, this legislation doesn’t have any impact on cisgender people, it marks a much-needed change to take an outdated process and make it more accessible and far less cruel for trans folks in Scotland,’ they told Metro.co.uk.

‘It’s vital that the rest of the UK takes note.

‘Westminster needs to realise that trans folks are not going to settle for needlessly bureaucratic processes, whereby our lives are judged by a mysterious panel of strangers, when we know that there is a much more simple procedure that will benefit us and make less work for the government.’

Having a GRC also means that a trans person’s death certificate will also accurately reflect who they were.

It also allows trans people to change the sex marker on their marriage certificates and update their sex with some private pension and medical insurance providers.

The paperwork is not needed for trans people to change their legal names or update the sex marker on IDs like passports or driver’s licences.

On the morning of today’s final vote, first minister Nicola Sturgeon said she ‘will never apologise for trying to spread equality’.

‘Removing the need for medical diagnosis for a trans person who wants to legally change their gender is one of the purposes of this legislation because that is one of the most traumatic and dehumanising parts of the current system,’ she said.

‘I will never apologise for trying to spread equality, not reduce it, in our country,’ Sturgeon added.