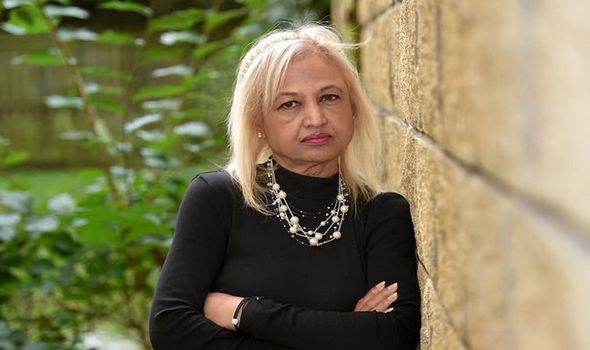 Audrey Lobo’s box is believed to contain dozens of sentimental items with a combined six figure value. The items include a diamond-encrusted Rolex watch, a replica of Princess Diana’s engagement ring, and her late husband’s wedding ring.

Ms Lobo had been storing the box in a vault at RBS’ Aberdeen branch, where she worked for almost 13 years.

Despite learning that the box had gone missing in January 2020, and bank staff saying that an investigation would be completed within eight weeks, the circumstances surrounding the disappearance remains a mystery 20 months later.

Ms Lobo told the Daily Record her stress has been intensified by the loss of her husband, Trevor, who died suddenly in Nigeria in April last year.

The retired widow, who now lives in Edinburgh, said: “Everything of value was in that box and it is irreplaceable.

“Both my husband and I were given Rolex watches (by an oil firm he worked for), and our names were engraved on the back. On each numeral dial of my watch, there was a diamond on it.

“There’s also a Tanzanite ring which my husband bought in Tanzania, and it was modelled on Diana, Princess of Wales’ engagement ring.

“The box also contains my great-grandmother’s wedding jewellery which was passed on to my mother. She was from Goa and all the gold there is 22 Carat. It also contained gold sovereigns, my wedding ring, engagement ring and my late husband’s wedding ring. These wedding rings were re-blessed in Bethlehem, 15 years after we got married.”

Ms Lobo and her husband used the security box to keep their most valuable possessions safe as the couple frequently spent time overseas and did not want to risk leaving them in their Aberdeen home.

But her husband, whose name she says was never registered with the security box, received a letter in January 2020 asking him to contact the bank about safe custody annual audit procedures.

Ms Lobo made enquiries at another branch in Aberdeen and said staff told her it was a routine letter and not to worry. Days later, she was left stunned after entering the Queens Cross branch to access her security box, only to be presented with someone else’s.

A letter from the bank sent in February last year, seen by the Daily Record, confirmed they had been unable to locate Ms Lobo’s items.

Ms Lobo said it had been 11 years since she had accessed her safety deposit box prior to its disappearance.

Having worked in the very branch it was kept in, she is struggling to understand how it went missing as the access procedure requires two members of staff turning separate dials simultaneously to open the vault door and to record it each time.

She added: “The ironic thing is that I worked in that branch for such a long time. People knew what could have been in that box. They knew I had Rolex watches.

“I recommended so many people to bank with them. I was one of their top employees. Now, they are not really being honest and telling me what has happened.

“It’s all been very painful. I cannot get any closure for this. I want my box back or for them to tell me what happened. I have been having sleepless nights because of this.”

Ms Lobo, who is currently living with her son, said she had to sell the family home earlier this year and wants to resolve the situation with RBS to move out to Goa where she and her late husband had planned to retire.

Principal and solicitor advocate, Jonny Nisbet, is now representing Ms Lobo. He says the bank insists there is no suggestion of criminality involved yet have been unable to provide them with any results from an initial investigation into the box’s whereabouts.

Mr Nisbet said: “If it has been lost and there is no chance of getting it back, can you tell us why? It would allow Ms Lobo to process it and to be content there is nothing further that can be done, then we can get on to dealing with compensation. Right now, they are stonewalling us.

“We have written to the chief executive and got a fairly hollow response, and it is now in the hands of their lawyers.

“It’s extremely difficult to come to any conclusion about what’s happened to it. It could be incompetence, a rogue employee, has there been some kind of exercise in the branch which has not been discharged with due care?”

The box contained various family heirlooms – including her mother’s rare Sri Lankan sapphire bought in the 1950s – at a branch in Edinburgh’s Castle Street.

In this case, the box had been moved to another RBS branch in the West End of the city and was padlocked. Days later, Ms Mowat was reunited with her safe deposit box.

Mr Nisbet added: “It does raise the question of whether there is a more systemic problem with RBS’s safe custody procedures.”

An RBS spokesperson said: “We are aware of an ongoing case with Ms Lobo and we’re working hard to fix it as quickly as we can.

“Earlier this year, we requested further information several times via the customer’s solicitor to enable us to resolve this quickly. Once we receive this response we are keen to continue progressing the case.

“We are sorry for the distress and upset that this matter has caused.”