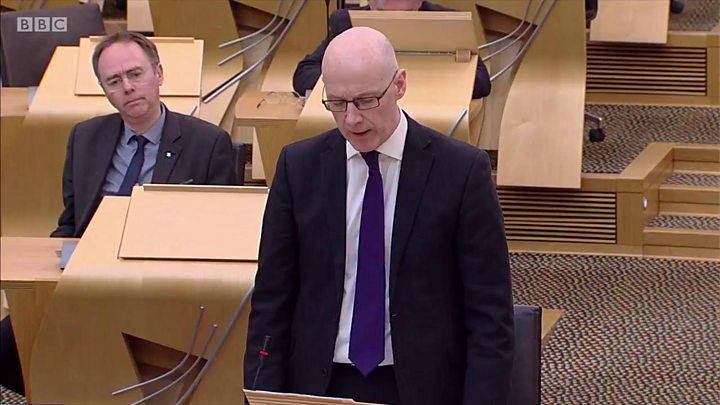 Exams for Scottish school pupils will not take place this year, the education secretary has announced.

John Swinney told MSPs the “unprecedented” move was a measure of the “gravity” of the situation caused by the coronavirus outbreak.

It is the first time the exams have been cancelled since the system was put in place in 1888.

The Scottish government announced on Wednesday that all Scottish schools would be closing on Friday.

Mr Swinney said a model would be put in place to ensure that young people in schools and colleges who were unable to sit exams would not be disadvantaged in any way.

Pupils will be graded on coursework, teacher assessment and prior grades.

Mr Swinney said: “In all of our history Scotland has never cancelled the exams. Since 1888 they have been held every May and June without fail.

“In the midst of two world wars the exams went ahead.

“It is a measure of the gravity of the challenges that we now face that I must today announce that the exams will not go ahead this year.”

Mr Swinney stressed that saving lives was the Scottish government’s top priority but said it was important to protect the “interests and life chances” of young people.

“I want the 2020 cohort to hold their heads high and get the qualifications they deserve,” he said.

The education secretary also urged teachers to do all they could safely to meet deadlines and allow young people to get their grades.

He added that the chief examiner would ensure that awards were made by 4 August so students could secure entrance to further or higher education.

The SQA’s chief executive Fiona Robertson said: “I fully appreciate that this will be an uncertain time for learners who have worked hard throughout the year and will now, with their families, be worried about what this means for them.

“Everyone here at SQA will do their utmost, with the support of the education system, to ensure that their hard work is rightly and fairly recognised, and allows them to proceed to further learning or work.”

Schools in England, Wales and Northern Ireland will also be closing this week.

The UK government has already announced that GCSEs and A-levels in England and Wales will be cancelled.

Six people have now died in Scotland after testing positive for coronavirus.

The first minister told the Scottish Parliament on Thursday that the number of confirmed cases of Covid-19 had risen to 266, an increase of 39 from Wednesday.

But Nicola Sturgeon warned the figures were “likely to be an underestimate”.