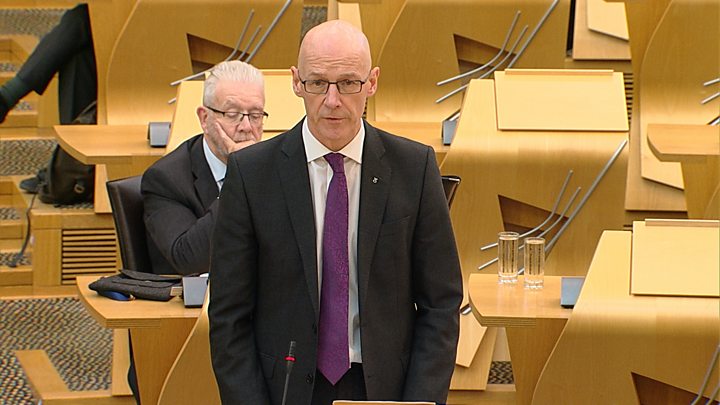 National 5 exams are to be cancelled in Scotland in 2021 and replaced with teacher assessments and coursework.

Education Secretary John Swinney said going ahead with all exams during the continuing Covid pandemic was “too big a risk”.

Higher and Advanced Higher exams will go ahead as usual – but will start on 13 May, two weeks later than planned.

The move came as new restrictions were imposed across Scotland in response to a sharp rise in new coronavirus cases.

Schools are to remain open but Mr Swinney said it was likely students would still face disruption – meaning an “alternative approach” was needed.

He said National 5 qualifications – which account for about half of all exams sat in Scotland and are roughly equivalent to GCSEs in England – would be judged on “teacher judgement supported by assessment”.

Opposition parties have been split on whether exams should go ahead, with the Greens calling for them to be axed entirely – but the Scottish Conservatives saying Mr Swinney had “thrown in the towel”.

Scotland’s school exams were cancelled for the first time ever in 2020, with the country locked down due to the coronavirus pandemic.

The Scottish Qualifications Authority initially drew up results using a system which took teacher estimates for each pupil, then moderated them based on results from previous years.

However, this sparked an outcry after 125,000 results were downgraded, with claims the moderation system unfairly penalised children at schools which had historically not performed as well.

The government subsequently agreed to accept the original teacher estimates of grades, and commissioned an independent review of the row. 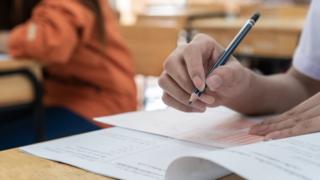 We are already eight weeks in to this academic year and teachers, pupils and parents had been calling for clarity about what would happen with the 2021 exams.

If they planned for “normality” next summer it risked last-minute changes close to exam time and a repeat of the problems of this summer.

The decision to scrap the final exams for National 5 students, which are usually taken by 15 and 16-year-olds, means their grades will be decided by continuous assessment throughout the year. Teachers and pupils can now prepare for this.

The decision to scrap the largest group of exams means there will be more space and time for Highers and Advanced Higher to take place under exam conditions in as close a way to normal as possible.

They will be pushed back slightly later to allow for extra teaching time, but will still be completed before the end of the school term.

This will allow papers to be graded and marks sent to pupils at the beginning of August, meaning applications for university and college places can continue as they normally would.

The education secretary said: “The risk remains that there may be further disruptions for individual pupils, schools, college, or more widely across the country during the course of this academic year.

“Due to the level of disruption already caused by Covid, and due to the likely disruption faced by some or all pupils and students this academic year, a full exam diet is simply too big a risk – it would not be fair.”

He added that a “contingency plan” was in place should Highers and Advanced Highers need to be called off, which could see grades again being awarded on teacher judgement.

The Scottish Conservatives said a full exam diet “could and should” have taken place, with MSP Jamie Greene saying “it does feel like the towel has been thrown in”.

The Scottish Greens have backed calls for all exams to be cancelled, asking why the same approach could not be applied to Highers and Advanced Highers.

Mr Swinney replied that the “significant weight” attached to Highers in university admissions meant they should be maintained if at all possible.