Tennent’s Bar in Glasgow found itself at the centre of a Twitter storm when a member of the public tweeted a picture of the flag display with the caption: “Tennent’s bar managed to get nine nations’ flags in their windows. There seems to be one missing. I do hope all residents and visiting English folk remember this oversite when choosing a bar to spend their cash in.”

Some were angered by the flag display which was there to celebrate Euro 2020, which commences this Friday.

One angry person said: “Disgusting, would not drink in it now.”

Another replied: “It will therefore not be somewhere I will enter as a Scot and proud Brit.” 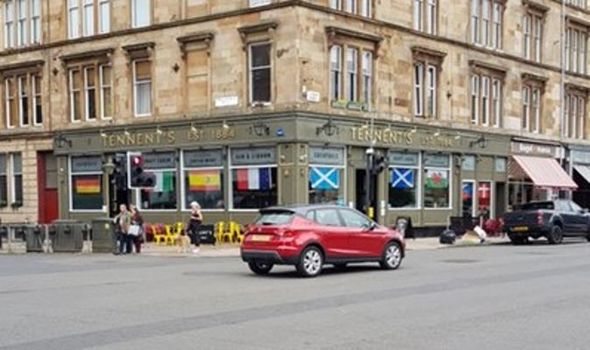 A third furious woman said: “I am really sick of this pathetic bigotry.”

Others hit back at the criticism saying they would not expect a Scottish pub to fly the English flag as it is traditionally thought of as the country’s biggest footballing rival.

One user said: “It’s Scotland. It’s football. I do not expect that a Scottish flag will show an English flag.”

Another replied: “Why? We’re rivals. I don’t want their flag up in bars and I don’t want our flag up in theirs. Beautiful country, love the cities I’ve been to there, but we’re rivals when it comes to football and should stay that way.”

A spokesman for Tennent’s Bar shut down the criticism, saying: “We have decorated the bar in preparation for the Euros kicking off this week, with flags of all nations involved on display throughout the pub.

“We are excited to welcome fans from all countries to the bar throughout the tournament, where they can comfortably enjoy every game and soak up what will be a great atmosphere.”