‘A fairy tale wedding’, one broadsheet called it, while another reflected on ‘a day of smiles’.

It was on 20 November 1947 that Princess Elizabeth married her true love, Philip Mountbatten.

Having become smitten with him when she was just 13 years old, and he 18, the pair first got to know each other by exchanging letters. From that moment their dedication to each other was lifelong, having been married for 73 years until Prince Philip’s death, aged 99, in April 2021.

From Elizabeth’s decision to marry him despite courtiers advising otherwise, to the ‘secret message’ Philip had engraved into the Queen’s wedding ring that only the two of them and their jeweller knew, they proved their love time and time again. 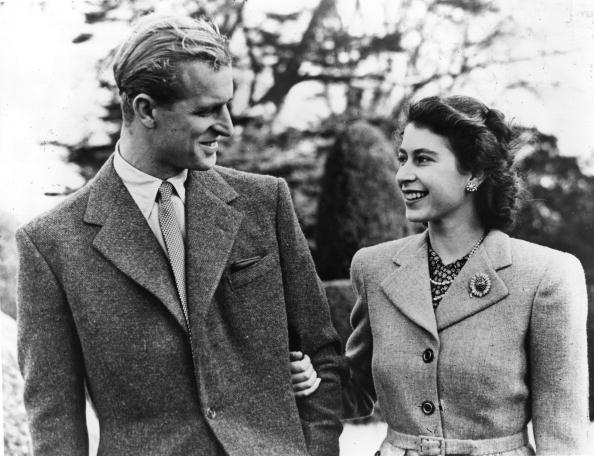 Shortly before their wedding, Prince Philip is said to have written to his bride-to-be saying he had ‘fallen in love completely and unreservedly’.

While many will be able to recollect the pair’s devotion to their duties, they had just under five years from their wedding until Elizabeth became queen to be solely devoted to each other and their growing family.

Their post-war wedding took place in front of 2,000 attendees in Westminster Abbey, as well as being broadcast on BBC Radio. What followed was a three week honeymoon split between the house of Lord Mountbatten, Philip’s maternal uncle, and the Balmoral estate – which Elizabeth called ‘heaven’.

During the second week of married life, Philip wrote in a letter: ‘Very humbly I thank God for Lilibet and for us’. Elizabeth, too, shared with a friend that she was ‘enjoying being married to the best and nicest man in the world’.

While Elizabeth lived life as an heir to the throne, she and Philip – who nicknamed his wife ‘cabbage’ – were able to lead an existence very different to the one they would later inherit.

Philip returned to the Navy and less than a year later, they had a beloved son and now-King, Charles. Although it was a time when fathers were not expected in the delivery room – and trend that remained obeyed by Philip – the doting husband and father did sprint to his wife’s room after a 30-hour labour and gave her a bouquet of carnations roses, while commenting that Charles looked like a ‘plum pudding’.

Not long after, in 1949, Philip was stationed in Malta and both he and Elizabeth maintained a home there, with her travelling between there and the UK – where Charles remained – until 1951.

This period, in which the couple welcomed Princess Anne, is frequently referred to as the happiest time of their lives and Malta is the only place outside of the UK that the Queen ever referred to as home.

It’s said that living in Malta provided them an opportunity to avoid the expectations of royal life: Elizabeth could put being a wife first. She was allowed to drive, dance (she was especially fond of the Samba) and pay for things herself – something unheard of for royalty.

It was a life away from journalists, and the couple were able to entertain friends at Villa Guardamangia, where they stayed for the duration.

The special place the island held in their hearts is evident from the visit they made on their 60th wedding anniversary, and it is believed that at Prince Philip’s funeral, the Queen carried a photo of them taken in Malta in her handbag.

As King George VI’s health declined in 1951, the young couple took on some of his duties, completing an international tour of Canada and a visit to Washington D.C.on his behalf. This signalled a significant change in their marriage, with it becoming clearer what would be expected of the soon-to-be Queen – and her husband taking a more backseat role.

Prince Philip later said in an interview that he had ‘no choice. It just happened [and] … I tried to make the best of it’.

When George VI died in 1952, after succumbing to lung cancer, the pair were on tour in Kenya and immediately returned home to mourn.

That Elizabeth had to ascend the throne at such a young age would have likely come as an unexpected surprise to the couple – after all, her father was only 56 when he died, having become king 16 years before. The three kings before him had been in their 40s and 50s when they were crowned.

It also meant the couple had to give up the life they’d built together in Clarence House, swapping their ‘modest’ home for the gilt and gold of Buckingham Palace.

According to royal biographer Penny Junor it was a step that the Queen was reluctant to make, as she was so fond of their first marital home, however Prime Minister Winston Churchill pushed the couple to make the move to a more stately residence in 1953.

It was a moment in their lives touched upon by Netflix series The Crown; viewers saw Matt Smith’s Prince Philip left heartbroken by the decision, after the Queen had earlier vowed that they would never move to Buckingham Palace.

While their roles certainly brought unique challenges to their relationship, their love remained absolute. It is believed that even when apart for weeks at a time – as was the case when Philip retired – they spoke on the phone every day.

Private secretary to the Queen, Lord Charteris, remarked that ‘Prince Philip is the only man in the world who treats the Queen simply as another human being’. And after 70 years of marriage, royal biographer Ingrid Seward noted that the Queen’s face still lit up every time her husband entered the room.

Theirs was a love, companionship and understanding that was often put to the test, but always managed to win out until the ‘peaceful’ death of Prince Philip in April 2021 – around a year and a half before her own.

In an image that will stay with the public for years to come, the Queen – clad in black, with a matching mask – wiped away tears entirely alone at her late husband’s funeral on April 17, while her kingdom endured the heady, fatal heights of a pandemic.

Though her strength prevailed in her reign, it was clear to the public that it the hardships she faced were made easier by having the unwavering love and devotion of the one person who treated her as a human.

In the British Pathé recording of their wedding, it was said: ‘In the princess, the nation has found all the qualities that merit the confidence of a people that have faith in the crown and its rigid observance of public duty.

‘And when the time comes for her to assume her responsibilities, by her side will be a husband whose counsel will merge with her own for the good of the realm.

‘In that grateful knowledge, the nation and the Commonwealth will pray that the young couple can enjoy a long, happy and fruitful life’.

After 73 years as husband and wife, with Philip acting as the Queen’s ‘strength and stay’ – as she once described him – the public’s prayers were certainly answered.