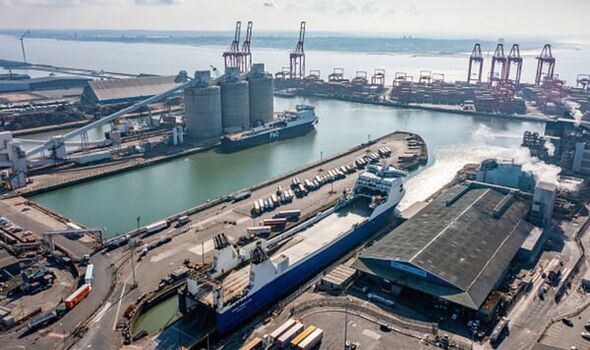 With just a week to go until many schools break up, Transport Secretary Grant Shapps is holding emergency talks with rival operators. He will meet bosses from DFDS and Stena Line today following the ousting of 800 P&O Ferries crew who were replaced with workers on less than the minimum wage.

Danish DFDS will be asked if it can fill the void – its beleaguered rival cannot restart services until its vessels now staffed by low-paid agency workers are signed off as seaworthy.

Swedish operator Stena, which mainly runs services across the Irish Sea, has already laid on extra crossings between Britain and Ireland.

P&O Ferries typically carry around 10,000 passengers every day during the Easter getaway from Dover, while the 75-minute journey to Calais is its flagship route and transports 150,000 people on a daily basis.

The suspension of services means Eurostar trains and car shuttle company Eurotunnel expect all their services for the holiday period to be fully booked. P&O Ferries between Larne in Northern Ireland and Cairnryan, Scotland, are also halted, while boats between Hull and Rotterdam are reduced. But services between Dublin and Liverpool are back operating.

On Friday, after P&O Ferries’ first passenger-carrying inspection in the wake of the sackings, the Maritime and Coastguard Agency impounded its European Causeway ship in Larne for being unfit to sail.

The Government is expected to force through new laws to enforce the UK minimum wage on seafarers after a loophole let P&O Ferries pay staff a fraction of the £8.91 hourly minimum. Operators registered in other countries and sailing to European ports are exempt from our employment laws.

There was an outcry when the giant, which has Dubai-based owners, made its staff redundant without notice or consultation before replacing them with inexperienced agency staff on an average of just £5.50 an hour.

P&O Ferries chief executive Peter Hebblethwaite admitted to MPs the firm knowingly broke the law before the cost-cutting lay-offs – and was universally pilloried for saying he would do so again. Mr Shapps and Boris Johnson said he should quit.

The RMT union claimed emergency laws are needed to stop P&O Ferries sailing with “under-trained and superexploited agency crews”. Labour is pressuring the Government to seek the removal of Mr Hebblethwaite as a director under current laws.