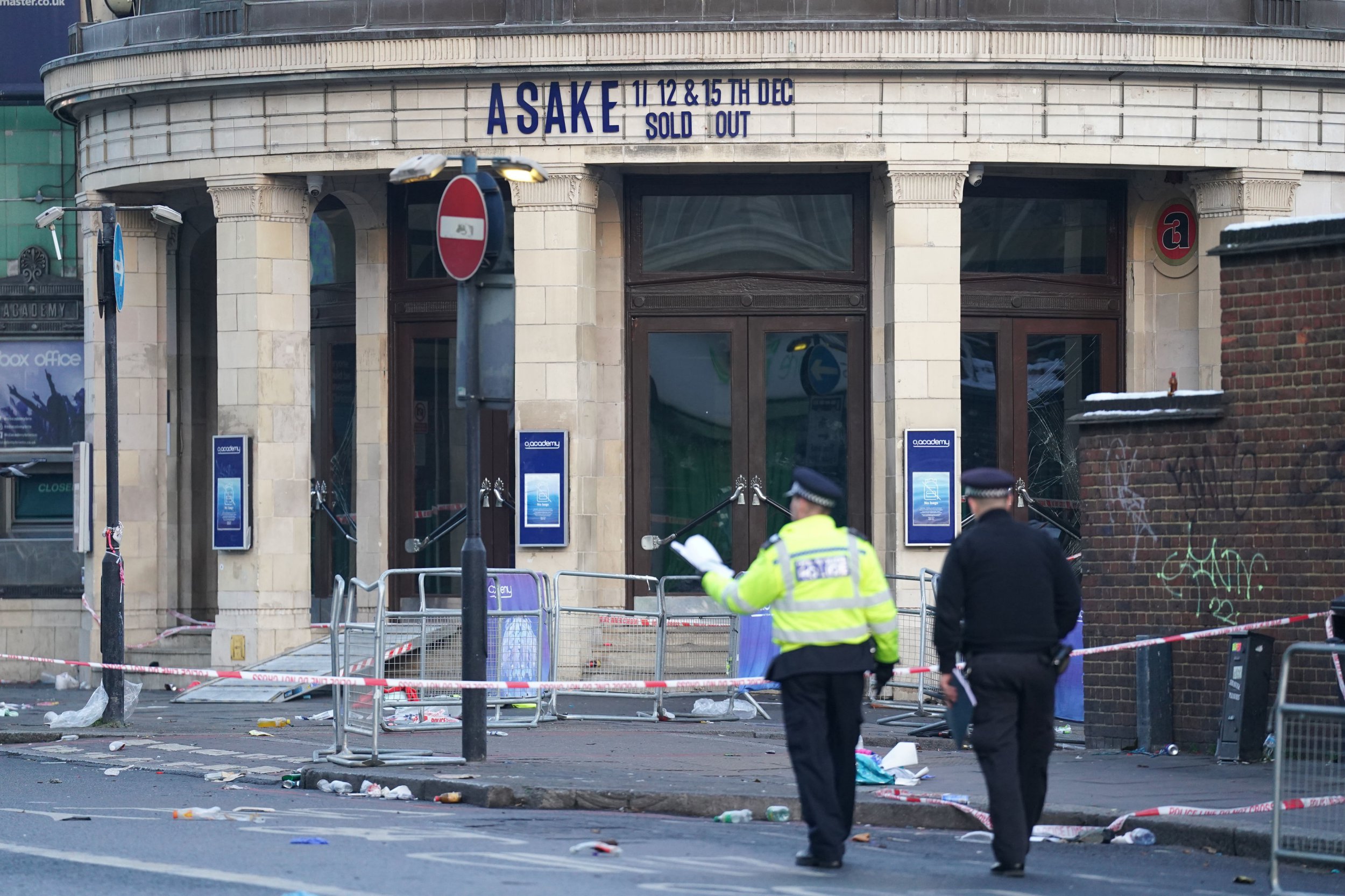 Some security guards at Brixton Academy regularly took bribes to let people in without tickets, a whistleblower has claimed.

It comes after two people were killed at a crush outside a gig at the south London venue in December.

A security guard told the BBC that some members of his team would each allow ‘a couple of hundred’ extra people into venues in exchange for money.

The whistleblower – known as Rohan – said some staff made up to £1,00 in cash in bribes from gig-goers who couldn’t get a ticket.

He said he was working on the door the night Afro-pop artist Asake was performing last year.

Rohan also claimed there not enough security on duty that evening at the O2 Brixton Academy – with only 110 members of the security team there, when there should have been 190.

He said: ‘‘It was like being in a car crash that’s been really awful – being crashed on and stamped on.’

Mother of two, Rebecca Ikumelo, 33 – and security guard Gaby Hutchinson, 23 – were both caught up in the crush and later died in hospital. Rohan said he witnessed what happened to both of them.

Gaby Hutchinson worked for second security company, County Security, as a specialist dog handler. There is no suggestion they were involved in taking bribes or letting people in without tickets.

But Rohan explained how some guards working for his firm – AP Security – had allegedly been allowing music fans in without tickets.

‘And the bouncers started being greedy, and it got out of hand. And people wanted to come in anyway, without a ticket.

‘You can train someone to the max, but when that happens in front of you, you actually stop… you freeze.’

Explaining how bribes were paid, Rohan said someone wanting to get into a gig would speak to security staff by the barriers controlling the queue of people waiting to get in.

‘They [some AP Security staff] will tell you a few things, [then you] go round the corner… give them a lot of cash and they will walk you straight in the front door.’

Rohan said taking bribes did not just happen at the Brixton Academy – but a number of venues, stadiums and festivals at which he had worked.

The amount of money handed over depended on who was playing.

Rohan says at Brixton, his employer AP Security – knew about the bribe allegations – because he had been in meetings where people had complained about two particular individuals.

The subject of bribes had also been brought up in briefings and in conversations between managers and bouncers, he claimed.

It was initially revoked in December after the crush, and was reviewed yesterday.

Police had applied for a summary review of the venue’s licence, telling councillors it believed the venue was associated with ‘serious crime and serious disorder’ after the crush.

The O2’s owner had earlier said it would shut for three months in any event while officers carried out their investigations into the circumstances of the fatal incident.

Announcing the decision on Monday afternoon, Cllr Fred Cowell said: ‘Both the police and the licence holder have expressed the view that the ongoing investigations are at too early a stage to clearly identify the cause or causes of the fatal incident on the 15th December 2022 and the extent of any remedial steps required to prevent any repetition of a serious incident.

‘As a consequence, the licensing sub-committee is not presently satisfied that the venue can reopen at this stage without undermining the licensing objectives.’

AP Security has been contacted for comment by Metro. It previously told the BBC it would not be offering any statement on the claims.