The Foreign Secretary says there will be a European-led maritime security mission focused on protecting shipping in the Strait of Hormuz.

It comes after Iran seized a UK-flagged oil tanker on Friday.

Jeremy Hunt has described the capture of the Stena Impero and its 23 crew as “an act of state piracy” – saying Britain would “take appropriate action to support the safe passage of vessels through the Strait of Hormuz”. The crew had been expecting to arrive in the Saudi Arabian industrial city of Jubail on Sunday, having departed Fujairah on the east coast of the United Arab Emirates on Thursday.

As it passed westward through the Strait of Hormuz on Friday, it was approached by four unidentified boats and a helicopter, from which masked and armed troops from the Iranian Revolutionary Guard abseiled on to the vessel to seize control.

Speaking in parliament on Monday, Mr Hunt said: “Under international law Iran had no right to obstruct the ship’s passage – let alone board her. It was therefore an act of state piracy.”

The US had offered a proposal on how to enhance maritime security in the Gulf and on 24 June requested that the UK contribute, escalating this to a formal request on 30 June.

Despite the tensions, Mr Hunt said the UK will not join America in abandoning the nuclear deal – something UK and a number of other European countries remain committed to. However, the foreign secretary said he would discuss how future actions would complement the US’s proposals.

“It will not be part of the US maximum pressure policy on Iran because we remain committed to preserving the Iran nuclear agreement,” Mr Hunt said.

Mr Hunt’s comments suggest the UK will, as part of a European alliance, work alongside rather than directly with the US and their hardline behaviour towards Iran.

The details of who will join the protection force, when it will be put in place and how it will be funded are not yet known.

As the mission is bulked out, a Type 45 destroyer, HMS Duncan, has been dispatched and is set to arrive in the region by the 29 July, a week from today. She will take over from HMS Montrose, a Royal Navy Type 23 frigate currently deployed in the Gulf.

Clarifying the events of the tanker’s capture, Mr Hunt confirmed to Parliament that HMS Montrose tried to save the tanker and repeatedly warned the Iranians by radio that their actions were illegal. 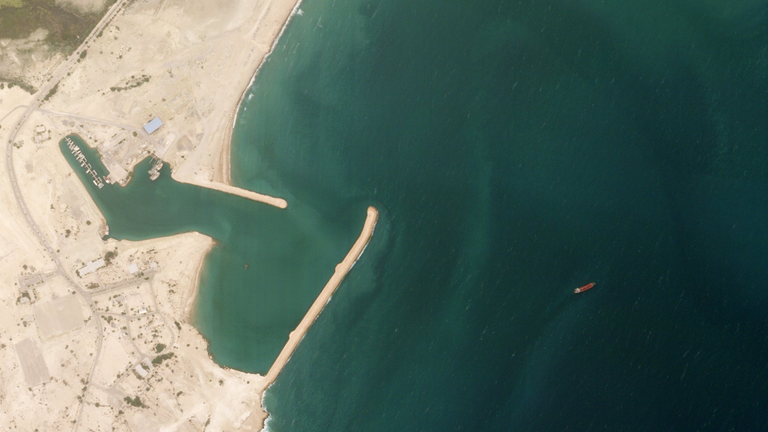 Just nine days earlier, the frigate had successfully intercepted an attempt to board another tanker, British Heritage.

The prime minister’s official spokesman, James Slack, said giving an individual naval escort to all UK-flagged ships is not an option because of the volume of traffic, but he denied cuts have made the Royal Navy too small.

“We have the largest military budget in Europe, and we are investing in a world-class Royal Navy,” he said.

Meanwhile, Iran’s government spokesman Ali Rabiei said Monday defended Iran’s actions, saying: “When you illegally seize a ship in Gibraltar… we don’t deem it as necessary to show tolerance,” he said. “Some countries have asked for the immediate release of the British tanker. Well, we ask those countries to make the same request to Britain first.”

The Royal Navy helped impound Iran’s supertanker off the coast of Gibraltar, a British overseas territory located on the southern tip of Spain at the beginning of July.

Mr Hunt has slammed Iran’s attempts to position this as a “tit-for-tat incident”, saying “there is simply no comparison between Iran’s illegal seizure of a vessel inside a recognised shipping lane – where the Stena Impero had every right to be – and the enforcement of EU sanctions against a tanker that had freely navigated into the waters of a British Overseas Territory.”

The British-flagged tanker is currently in the Iranian port of Bandar Abbas.

The Department of Transport has raised the security level for British-flagged shipping to Level 3, meaning travel in Iranian waters and the Strait of Hormuz is not advisable.

Any British-flagged ships intent on travelling in the area are asked to contact the UK government in advance.