Nilsen, who murdered at least 15 people in the 1970s and 80s, died in Full Sutton prison, East Yorkshire, on Saturday.

He was taken to hospital in York two days before suffering with abdominal pains, Hull Coroner’s Court heard.

The 72-year-old, who spent 34 years behind bars, underwent an operation but later suffered a blood clot.

Coroner’s officer Gary Lynch said Nilsen, who was born in Fraserburgh, Aberdeenshire, died on 12 May after his condition deteriorated.

A post-mortem examination showed the murderer’s immediate cause of death was pulmonary embolism and retroperitoneal haemorrhage.

Mr Lynch said the underlying causes of this were deep-vein thrombosis and an “abdominal aortic aneurysm rupture repair”.

Nilsen’s body has been released to his next-of-kin for a funeral. 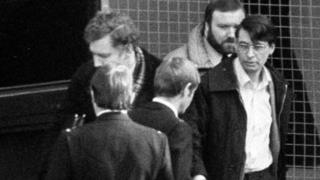 Nilsen, a former civil servant, murdered and dismembered several of his victims, most of them homeless young gay men, at his home in Muswell Hill, north London.

He was arrested aged 37, when human remains were found in a blocked drain at his home.

He and other tenants in his block of flats had complained to the landlord about the smell from the drains, before a plumber who was called found pipes packed with human flesh.

He admitted killing at least 15 people, but was convicted of the murders of six men and two attempted murders.

He was jailed in 1983 for life with a recommendation he serve a minimum of 25 years.