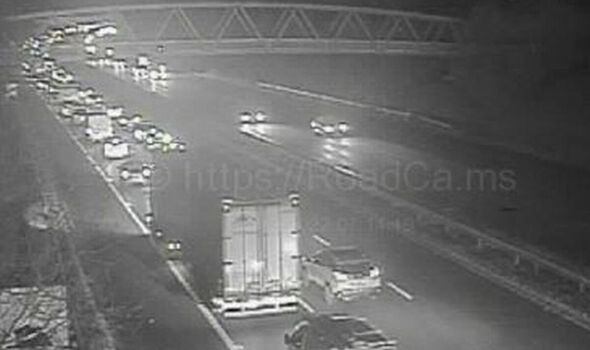 The M1 has been hit by traffic chaos after a stretch of the northbound motorway was closed following a “serious collision”.The crash near Barnsley between Junction 37 and 38 was first reported on the National Highways Twitter feed in the early hours of this morning. Junction 37 is the A628 Whinby Road turn-off that is signposted for Barnsley and Dodworth, while Junction 38 is the A637 turn-off that is signposted for Woolley and Huddersfield.

Pictures from the Motorway Cameras website show long queues of traffic around the impacted area.

The National Highways Yorkshire account wrote at 1.12am: “The M1 is closed northbound between J37 and J38 near Barnsley following a serious collision. More details to follow.”

National Highways posted about the crash and subsequent delays on its website. This read: “The M1 in South Yorkshire is closed northbound between J37 and J38 near Barnsley, following a serious collision.

“Collision investigation is taking place and the closure is expected to remain in place until at least 08:00 this morning.

“National Highways have resources in attendance to assist with traffic management. If this closure impacts on your planned route, please allow extra time for your journey. Traffic is being diverted via local routes.”

The Inrix traffic data website also shared an update online about the collision seven minutes later at 1.19am.

This read: “M1 Northbound closed due to accident from J37 A628 Whinby Road (Barnsley/Dodworth ) to J38 A637 Huddersfield Road ( Woolley/ Huddersfield).”

The M1 northbound between junctions 37 and 38 was still closed just after 7am this morning as “collision investigation works” take place following the serious crash.

Motorists queening on the impacted area have been warned to expect delays of up to 20 minutes, with normal traffic conditions not likely to return to normal for several hours.

National Highways tweeted: “REMINDER – The M1 remains CLOSED northbound between J37 and J38 near Barnsley for collision investigation works following a serious collision. There are currently delays of 20 mins.”

Motorway Cameras has warned the traffic chaos could last for another five hours, with the impacted area of theM1 not returning to normal until early afternoon.