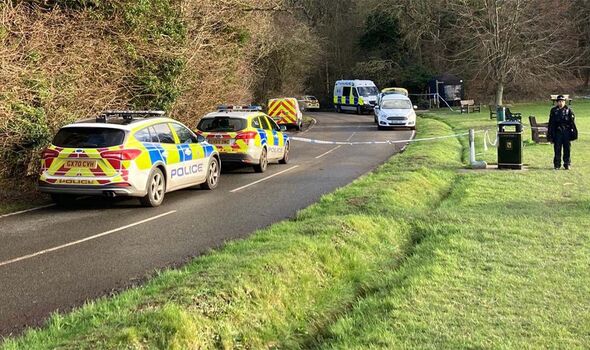 Police investigating the death of a young woman in a horrific dog attack have detained seven canines from an address in Surrey.

Investigations at the scene in Caterham, Surrey, continue this morning after a woman in her 20s was pronounced dead and a second woman was found injured yesterday afternoon.

The woman is yet to be formally identified, but her next of kin have been informed and specialist police officers are supporting them, Surrey Live reports.

Officers confirmed a second woman was taken to hospital to receive treatment for dog bites, but her condition is understood to not be life-threatening.

Armed officers and National Police Air Service found seven dogs at the scene last night, which have since been taken into police custody.

This morning, a large police presence and road closures remain in place around Gravelly Hill, including both marked and unmarked cars and vans. Police tape and a black gazebo can also be seen inside the cordon.

Tim Oliver, leader of Surrey County Council, said this morning: “It’s a terrible incident. It just sounds absolutely shocking and I’m sure that the police will be following it up.

“I don’t know what can be done but something needs to be done to prevent this from happening again, most certainly.”

In a statement yesterday, police urged people in the community not to speculate about what led to the woman’s death.

“Our thoughts are with the family of the woman who sadly died this afternoon,” said Chief Inspector Alan Sproston. “This incident will be concerning to the local community and I would like to reassure them that we believe all dogs have been accounted for and are in police custody.

“Our investigation to establish the circumstances of the incident remains ongoing and we would ask the community not to speculate.”

Claire Coutinho, Conservative MP for East Surrey, has released a statement on social media, saying her thoughts are with the loved ones of the victim and also thanked paramedics for their efforts.

Ms Coutinho wrote: “My thoughts are with the loved ones of the lady who has died following a dog attack in Caterham this afternoon. Another lady was injured but is thankfully recovering in hospital.

“Thank you to the paramedics for their efforts at the scene, and officers from Surrey Police who controlled the situation so quickly.”