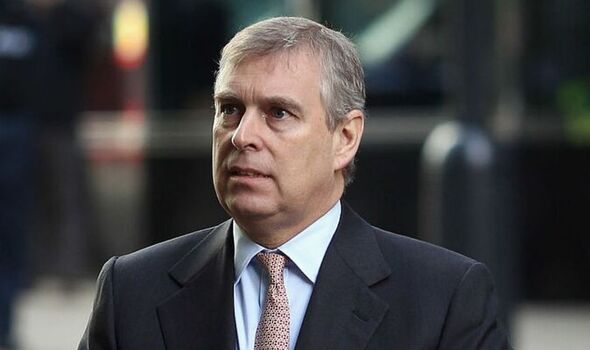 Just days after it was announced that the Duke of York reached an out-of-court settlement in his US civil sexual assault case brought by Virginia Giuffre, author Nigel Cawthorne believes Andrew may be doomed to spend the rest of his days on foreign soil as a lonely outcast from his family and homeland.

Mr Cawthorne said the royal’s plummeting popularity in the UK could mean he may face “little option other than to seek refuge in a foreign country” rather than “live like a pariah among people who dislike him now and may come to despise him”.

The biographer said: “His approval rating is plummeting towards single digits, there are demands to strip him of the rest of his titles and there is uproar over who will pay the £10million settlement bill in his civil sex case.

“It will only get worse.

“The FBI still wants to interview him in their criminal investigation into Jeffrey Epstein’s child trafficking empire and there will be fresh calls to reopen the file in London now that Cressida Dick is standing down as Met Police Commissioner.

“No wonder he has been hiding from public view at the Royal Lodge in Windsor.

“His own stupidity and arrogance have put him where he is and have cast a shadow over the Queen’s Platinum Jubilee celebrations.

“There will come a point soon, I believe, where the public will simply want to be rid of him and he will be forced to recognise he has little option other than to seek refuge in a foreign country – probably one that has no extradition treaty with America.”

There could be even more legal woes ahead for Andrew. His civil settlement with Ms Giuffre will not prevent her from testifying against him in a criminal trial or other civil case, reveals leading US attorney Arick Fudali.

Currently, the FBI and NewYork prosecutors are still seeking to interview Andrew, two years on from their public request for an interview.

Fudali, who represented Epstein victims, said: “If there is a criminal prosecution then this settlement does absolutely nothing.

“The important thing is that Ms Giuffre’s co-operation in the criminal case, and she is involved, cannot be part of the settlement.

“Prince Andrew could not say to her, she cannot testify. That is extortion. Ms Giuffre absolutely could partake in an criminal investigation if the state attorney of NewYork and the FBI continue to pursue that.”

Mr Cawthorne said if the Duke does seek a haven abroad, he will be following in the historical footsteps of his own grandfather – and namesake – Prince Andrew of Greece and Denmark, who was banished for life from Greece in 1922 for disobeying a military command during an attempted coup. Though he was allowed to briefly return to his homeland, Andrew spent most of the rest of his life on the French Riviera, while his son – the late Prince Philip – fought for Britain during the Second World War.

That Andrew died from a heart attack, aged 62, at the Hotel Metropole in Monte Carlo in December 1944, having not seen anyone from his family – including Prince Philip – for the previous five years and leaving a trail of debt behind him.

By that date, another of the Duke’s relatives – his great-uncle Edward VIII – had already spent eight years in exile after sensationally abdicating the throne to marry his twice-divorced American love Wallis Simpson.

After years of being regarded as members of café society and minor celebrities in NewYork and Paris, where they hosted lavish parties, Edward died of throat cancer in May 1972 in France at the age of 77.

Mr Cawthorne added: “It looks increasingly likely to me that Prince Andrew will end up taking the same lonely path of exi” rather than “live like a pariah among people who dislike him now and may come to despise him”. “

Last Tuesday the Duke agreed to pay an undisclosed sum as part of the settlement, and accepted Ms Giuffre had suffered as a victim of abuse. Ms Giuffre had been suing the Duke, claiming he sexually assaulted her on three occasions when she was 17. He has always denied the allegations and the settlement did not include an admission of liability.

As well as the continuing row over how his court settlement will be paid, the Duke faces another tough week of public opprobrium, with councillors in York taking steps to remove his Freedom of the City honour as well as calling on him to relinquish his ducal title.

Similarly, politicians in Scotland are urging him to forfeit his title as Earl of Inverness, as locals claim their city is “being dragged down by association” with him.

He has just delivered the manuscript of his as yet untitled book to his publisher and revealed yesterday: “It will tell the story of how she is much more of a victim than is widely known.”

Even now I hope Andrew weathers the storm and finds a safe haven, says MICHAEL COLE

I always liked Prince Andrew. That is not a fashionable view right now, with the Queen’s second son cast into outer darkness with no realistic chance of a future royal role.

But memories are short.

People forget the Happy Prince, smiling with a red rose clamped between his ample teeth, on the dockside in Portsmouth, just returned from victory in the Falklands War in 1981, his mother there to welcome him.

As a helicopter pilot on HMS Invincible, Andrew flew decoy missions to divert Argentine Exocet missiles from the Task Force. He might easily have come home in a body bag.

The Government had considered selling the aircraft carrier to Australia shortly before the Argentine invasion. I had filmed Andrew bounding down the gangplank at Rosyth, shouting that his ship was “a great ship, a wonderful ship”, one that should not be sold, before racing off to spend a weekend at a Scottish castle.

At Floors Castle, in the Borders, he asked Sarah Ferguson to marry him. She thought he was joking – older than him, with a romantic past, she was not like Diana.

But they were in love. On the Palace balcony after the wedding in 1986, they did not need the crowd’s urging for them to kiss.

On their first royal tour, to Canada, they made the best possible impression.

How did it all go wrong, after the birth of two daughters?

The Prince’s absences on Navy duty have been blamed but his wife’s betrayals, with American businessmen Johnny Bryan and Steve Wyatt, were the death blows.

Before it all went irretrievably wrong, successive private secretaries to the couple as well as Sarah’s parents, Major Ronald Ferguson and Mrs Susan Barrantes, all approached me. I was now in PR and they all had the same question: how can Sarah save her marriage?

I replied: firstly, shut up; secondly, do a worthwhile project and let someone else announce its success; and thirdly, love her husband.

If the Duke and Duchess of York had a happy royal marriage, I said, Sarah would be as popular in the 21st century as the Queen Mother had been in the 20th.

The advice was ignored. They divorced after 10 years leading on to last week’s expensive legal settlement with Virginia Giuffre over sexual assault allegations when she was 17.

He denied the allegations and settled the claim with no admission of liability.

It was a black day for Andrew when he met Ghislaine Maxwell who introduced him to Jeffrey Epstein with his harem of under-age girls.

I am sorry to see Andrew brought so low. I always found him more approachable than his siblings.

In recent years, he has always been affable and willing to help. His “Pitch at the Palace” gave many budding business talents a helping hand.

I didn’t see the arrogant bully, as portrayed now by critics eager to kick a man when he is down. It’s hard to reconcile that with the happy bridegroom with the world at his feet and happiness ahead.

Such a fall from grace can only be termed tragic but, even now, I hope he weathers the storm and finds a safe haven because no one’s life should effectively end at the age of 61.