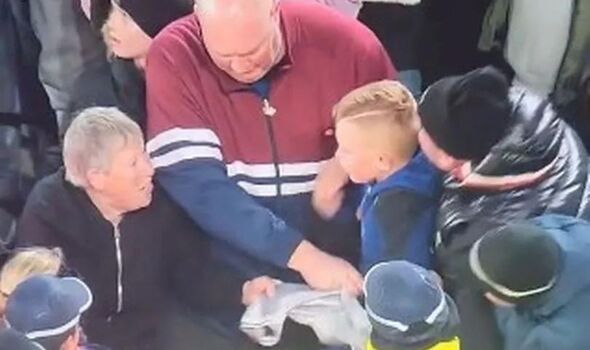 A woman has been slammed as “shameful” after trying to wrestle a footballer’s shirt from a young fan.

Following Newcastle’s 3-0 win at Leicester’s King Power Stadium on Boxing Day, Magpies defender Dan Burn walked over to the away section, pointed at a young boy, and threw his shirt into the stands.

Footage then shows a woman trying her best to pull the shirt out of the boy’s hands, reports The Mirror.

It then shows the ensuing scuffle in which other Newcastle fans try to free it from her grasp.

A reply to the video, which has been viewed 5.8 million times, shows a picture of the boy eventually holding up the shirt in triumph.

It is accompanied by the caption: “Don’t worry he got it”.

A comment from Facebook, which appears to be from the boy’s mother, said: “The bloke in the red was getting the shirt for my son but the lady was trying to snatch the shirt from my son’s arms, but the stewards got involved and got the shirt.”

Social media users were quick to condemn the actions of the woman, labelling her “shameful” and “disgraceful”.

The boy’s father, Nathan, has since forgiven the woman for her actions.

Newcastle’s sixth win in a row has taken the side to second in the Premier League.

However, if Manchester City win tonight, December 28, Eddie Howe’s side will drop down to third.