The unnamed snorkeler spoke out after they were bitten by a shark and suffered leg injuries off the Cornish coast in Penzance. The swimmer was rescued by a coastguard following the horror incident on Thursday.

She praised the “amazing” actions of staff at the Blue Shark Snorkel, who ran her £180 sea snorkel, during the “very scary” experience.

In a statement released by Blue Shark Snorkel, they said they didn’t want the “freak” incident to “tarnish the reputation of an already persecuted species”.

The swimmer said: “I just wanted to say that despite how the trip ended, it was amazing to see such majestic creatures in the wild and I don’t for a second want this freak event to tarnish the reputation of an already persecuted species. 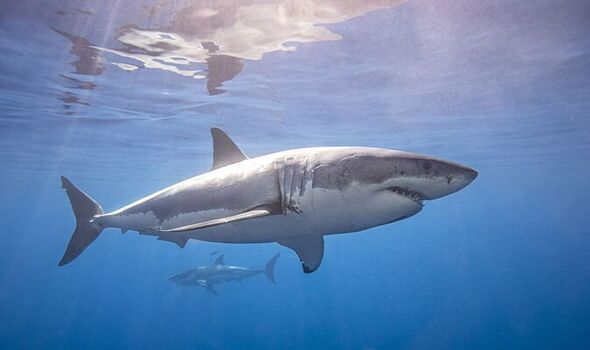 “Wanted to thank everyone for their amazing actions.

“What was a very scary incident was made so much easier by the kindness and calmness of the people around me.

“Thank you to the trip team for getting me back to shore quickly and carefully and making me feel as safe as I possibly could.”

The victim said it was always going to be a risk when deciding to swim in the “habitat of a predator”.

She added: “We all take these risks when we enter the habitat of a predator and we can never completely predict the reactions of a wild animal.“

They told the Daily Star: “These occurrences are extremely rare and can be easily misunderstood so we want this to be dealt with as sensibly as possible.

“As we know, these things can happen when we choose to interact with wild animals in their own environment.

“The last thing we want is to let speculation drive the media into a world of bad press for the sharks, under no fault of their own.

“We immediately enacted our emergency response plan, with first aid being carried out on the person involved.

“Following advice and assessment from the coastguard, the person walked off the boat and received further treatment ashore.”

It remains unclear as to what breed of shark made the attack, but sightings are fairly common in Cornish waters.

According to the experts at British Sea Fishing, the most common breeds in Cornish waters are blue sharks, porbeagle and basking sharks.

They said: “Blue shark attacks on humans are extremely rare but have been recorded.

“In total, on a world-wide basis, there are four confirmed cases of fatal blue shark attacks on humans with twenty-five confirmed non-fatal attacks.

“In August 2012 a beach in Ceredigion, Wales was closed to bathers due to the presence of a blue shark.

“The shark was spotted swimming in between boats and came very close to the shore, swimming past tourists in just a few feet of water.”

The first shark attack to take place in the UK was in Sussex in 1785 on Brighton beach.

This latest incident is the first shark attack recorded since 2018 when a windsurfer was attacked in Felixstowe, Suffolk.