MADRID — She is a conservative who campaigned on a slogan that came down to one word: Freedom. She offered herself as a champion of small business and scoffed at national coronavirus restrictions.

Her critics called her a “Trumpista.” But Isabel Díaz Ayuso is now a rising force in Spanish politics. Voters rewarded the right-wing leader of the Madrid region with a landslide victory on Tuesday after she defied the central government by keeping the capital’s bars and shops open throughout much of the pandemic.

She suggested that her victory showed that pandemic fatigue and economic distress had left Spaniards unwilling to endure more of the measures favored by the left-wing national government led by Prime Minister Pedro Sánchez.

“Madrid is freedom — and they don’t understand our way of living,” she told her supporters about her left-wing opponents who suffered a crushing loss in the vote.

Ms. Ayuso’s Popular Party more than doubled its number of seats in Madrid’s regional assembly, trouncing other parties, including Mr. Sánchez’s Socialists. Her party fell just short of an absolute majority but will hold onto power with support from the far-right Vox party.

She is the most talked-about politician in Spain right now. But with nationwide elections not planned for another two years, analysts are divided over whether she could make the leap to the national political stage, or would even want to.

Even so, Ms. Ayuso’s victory, could signal that a shift to the right is underway more broadly as the country struggles to emerge from the ravages of the pandemic.

Ms. Ayuso, 42, stuck to a simple and clear message that connected with voters who have endured more than a year of pandemic, said Lluís Orriols, a professor of politics at the Carlos III University in Madrid.

“Maintaining Madrid open and economically active was something visible to all, while demonstrating that lockdown measures really help keep people healthy is something harder to do,” Mr. Orriols said.

Madrid was the epicenter of Spain’s pandemic in the spring of 2020, when its hospitals overflowed with Covid-19 patients. But after the central government lifted a nationwide state of emergency last June, Ms. Ayuso ensured that the city was one of the most bustling in Europe, even when its Covid-19 infection rate crept back up after Easter.

This week, Covid-19 patients are filling 44 percent of the beds in Madrid’s intensive care units, which is about double the national average.

“To understand that freedom means to do whatever you want during a pandemic, when intensive care units are above capacity and colleagues feel defeated, seems to me indecent, to say the least,” Dr. Fuentes said. 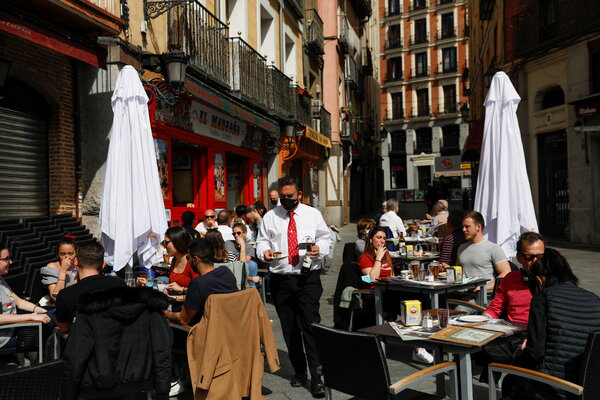 Outside the headquarters of the Popular Party on Tuesday evening, a crowd of supporters danced to the sound of a D.J. Several of them said they were celebrating Ms. Ayuso’s personal victory, rather than that of her party and its national leader, Pablo Casado.

“She’s totally a pop icon and a mass phenomenon,” Mariola Vicario, a 25-year-old student, said of Ms. Ayuso. “I don’t consider Casado to have her strength.”

In terms of handling the pandemic, Ms. Vicario said that Ms. Ayuso “took measures when needed, but what she did not do is let people starve to death” by keeping Madrid’s economy shut down as long as that of other cities.

Madrid’s vote was a resounding defeat for left-wing parties, but it also showed that Ms. Ayuso can keep conservative votes that might have gone to Vox.

Mr. Casado has sought to distance his party from Vox, notably last year when he refused to back a thwarted attempt by Vox to oust Prime Minister Sánchez in a parliamentary vote of no confidence.

In contrast, Ms. Ayuso said during her campaign that the Popular Party differed on specific issues from Vox, but also suggested that the two had enough common ground to work together in Madrid if needed.

Even in the midst of the pandemic, turnout in Madrid reached a record 76 percent on Tuesday, 12 percentage points higher than in the 2019 vote. It was also significantly higher than most other elections recently in Europe, where voters have been reluctant to turn out amid the health concerns.

In her closing campaign speech on May 2, which was a public holiday in Madrid that commemorates the city’s fight against the occupation of Napoleon’s troops, Ms. Ayuso made a thinly-veiled comparison between the 1808 resistance against the French and her own stance against the central government during the pandemic.

Ms. Ayuso, who studied journalism, was a second-tier politician when Mr. Casado unexpectedly handpicked her in early 2019 to be his party’s lead candidate ahead of an election in the Madrid region.

She then took charge of the capital region, which the Popular Party has run since 1996, but was forced to govern with the support of a center-right party, Ciudadanos. Tensions between the partners mounted earlier this year, and Ms. Ayuso called a snap election.

On Tuesday, Ciudadanos failed to pick up enough votes to even hold a single seat within Madrid’s regional assembly — votes that likely benefited Ms. Ayuso’s party instead.

The election ended the political career of Pablo Iglesias, the founder of the far-left Unidas Podemos party. He had unexpectedly abandoned his post as deputy prime minister of Spain to run in the Madrid regional election.

In a farewell address to his supporters, Mr. Iglesias said he was sorry to witness “the impressive success of the Trumpist right that Ayuso represents.”