PARIS — Camille Kouchner, a slight, cleareyed woman who for decades was consumed by guilt, has become the big disrupter of French society. Her battle to liberate herself from a painful family secret has touched a nerve across France.

For decades, Ms. Kouchner felt trapped. “Guilt is like a snake,” she writes in “La Familia Grande,” a book whose tale of incest and abuse is also the unsparing portrait of a prominent French family. It was a “poison,” a many-headed “hydra,” invading “all the space in my mind and my heart.” Until she felt she had no choice but to set down the unspeakable.

It was not easy. Olivier Duhamel, her stepfather and the man she accuses of sexually abusing her twin brother when they were teenagers, sat at the pinnacle of Parisian intellectual and cultural life before quitting all his posts on the eve of the book’s publication.

Her mother, Évelyne Pisier, a noted writer who was once Fidel Castro’s lover and who died in 2017, had turned vehemently on Ms. Kouchner over the allegation. The “big family” of the book’s title was by extension a certain left-leaning French cultural elite that had opted to protect one of its own.

In short, Ms. Kouchner was taking on a lot.

“OK, Camille, you are afraid of the repercussions, but if you do not speak, how can you be whole?” Ms. Kouchner, 45, said in an interview. “If you do not speak, you leave an upside-down world. You have to take the risk because you have a small chance of saying to those who suffer that their suffering is not for nothing.”

Her embrace of that “small chance” has led to the sort of politico-cultural detonation that the French call an “affaire.” A #MeTooInceste hashtag has taken off as tens of thousands of French victims break a silencing taboo. The book, published this month, has sold more than 200,000 copies. Several friends of Mr. Duhamel, including Élisabeth Guigou, a former minister of justice, have resigned prominent positions. 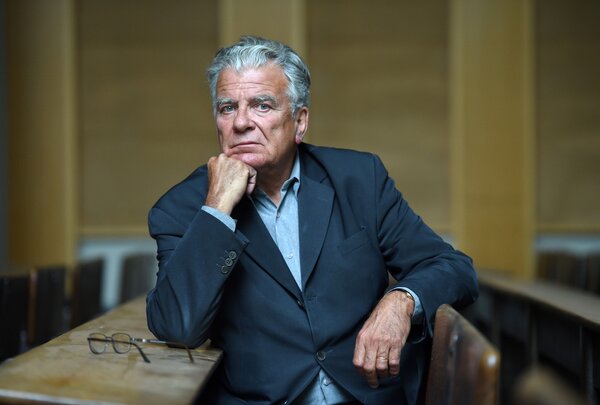 President Emmanuel Macron has taken to Twitter to hail a liberation, through “the courage of a sister who could no longer keep quiet.” He condemned “a silence built by criminals and successive acts of cowardice.”

“It’s really overwhelming,” Ms. Kouchner, a lawyer and university lecturer, said in a quiet, almost self-deprecating voice that tends to mask her determined bluntness. Her gaze is frank and direct. “I am very happy about the #MeTooInceste movement, not so much because people are talking — many had already done so — but because they are being listened to.”

However, she continued, her main aim was not political but literary, an attempt to describe her own agonized evolution. As the descendant on her mother’s side of an anti-Semitic French Fascist, and on her father’s side of forebears slaughtered at Auschwitz, she had to shape her own identity from a very young age. When she had her own son, she realized she could not keep quiet about Mr. Duhamel for fear he might strike again.

She also had to confront her mother’s strange complicity. When asked why she wrote the book, Ms. Kouchner replied: “Because my mother is dead.”

Her mother had many sides: the playful intellectual whom Ms. Kouchner adored; the woman who turned to drink after the suicides of both her parents; the suffering parent whose sister, the actress Marie-France Pisier, also died in an apparent suicide.

She was also the feminist mother who did not say no in Cuba when Castro — in good macho fashion — sent a car to scoop her up; the mother who left Ms. Kouchner’s father, Bernard Kouchner, a founder of Doctors Without Borders and later the French foreign minister, because “he chose to save other children, not his own.”

In many respects, Ms. Kouchner’s mother is the pivotal figure of the book, beloved and then estranged. Her mother sided with Mr. Duhamel, at least with silence, when confronted in 2008 with the charge that two decades earlier, her second husband had sexually abused his 14-year-old stepson.

Toward the end of the book, in a breathtaking passage, the author quotes her mother as saying: “If you had spoken, I could have left. Your silence is your responsibility. If you had spoken, none of all this would have happened. There was no violence. Your brother was never forced. My husband did nothing. It’s your brother who deceived me.”

So is guilt transferred, assuming multiple faces. So does the buried crime metastasize. So does a long-held secret exact its inexorable measure of suffering.

Ms. Kouchner, whose brother made her vow silence when he first told her what had happened, writes that she concluded in early adulthood that, “My guilt is one of consent. I am guilty of not having stopped my stepfather, of not having understood that incest is forbidden.” (Under French law, a stepfather’s sexual abuse of a child qualifies as incest.)

Her sense of guilt was compounded by her mother’s accusation that her silence was the real crime. Over everything lurked a particular terror: In a family of multiple suicides, her mother’s readiness to take her own life could never be excluded. She died in the end of cancer.

“My mother inverted responsibilities, inverted roles,” Ms. Kouchner said. “She became the victim of my decision not to talk. And when I did talk, she accused me of wanting to ruin her life. I said to her, ‘So, should I speak or not? Whatever I do is wrong.’”

And Mr. Duhamel? “My mother confronted him, and I think in the end they constructed a story to try to absolve themselves, to hide the violence of the whole thing.”

Now there seems to be no containing the “affaire.” Mr. Duhamel, 70, has hired a prominent lawyer to defend him. He has said nothing since his resignation this month as head of the body overseeing the renowned Sciences Po university.

It has become clear that Mr. Duhamel benefited from the silence of many in his circle of Paris friends, a recurring pattern in cases involving powerful men. Jean Veil, a prominent Paris lawyer, and Frédéric Mion, the director of Sciences Po, have both acknowledged that they knew of the accusations of sexual abuse but took no action against Mr. Duhamel.

Ms. Kouchner’s brother, called “Victor” in the book, has for the first time filed suit against Mr. Duhamel. The French public prosecutor has opened an investigation for rape of a minor and sexual aggression. An official commission investigating incest has been reinvigorated with the appointment of two new co-presidents.

“It’s only decent that he keeps quiet,” Ms. Kouchner said of Mr. Duhamel. “Because in reality, he made me keep quiet for many years. Not directly. But still, he crushed us. Until at a certain moment, I said: ‘Why am I keeping quiet? What is this secret that is not a secret, this secret that preserves an executioner?’”

Was “executioner” not a strong word? “Ah, he inflicted a lot of harm on us,” Ms. Kouchner said. She noted that Mr. Duhamel was unlikely to face punishment because of France’s statute of limitations, one reason she wanted an “indelible” testimony her children and grandchildren could read.

There is much for her descendants to ponder. Ms. Kouchner’s evocation of summer days at the family property on the Côte d’Azur is powerful in its evocation of a false idyll: tennis, meals, Scrabble, wine, laughter — as well as nude bathing in the swimming-pool, touching under the table and mockery of bourgeois sexual constraints.

“It’s forbidden to forbid” was the motto of these family gatherings, she writes. Her grandmother explained to her how to have an orgasm on a bicycle or a horse.

All the while, a serpent lurked, in this family and beyond it. Ms. Kouchner quotes a saying dear to her father Bernard: “Between the strong and the weak, it’s liberty that oppresses and the law that liberates.” She notes: “I would discover the full meaning of that.”