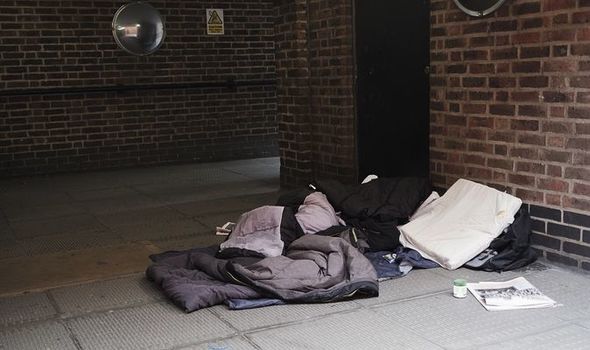 The end of the furlough scheme, cuts to Universal Credit and high inflation will fuel the worst Christmas crisis since 2016, says charity Centrepoint. A total of 29,477 people in England aged between 18 and 24 are expected to spend the festive season either sleeping on the streets or “sofa surfing” at the homes of friends and family. The shocking study of 2,000 people also found a third of those in that age group have spent the night in a park, 20 percent in a squat or empty property, 17 percent in a car park and 14 percent under a bridge.

Although 31 percent of UK adults have experienced financial difficulty in the last 12 months, more than half of the younger generation have suffered poverty.

Centrepoint chief executive Seyi Obakin OBE said: “Sadly, this Christmas we’re staring down the barrel of the worst youth homelessness crisis in the five years we’ve been collating this data. The pandemic has created a perfect storm – living costs are increasing and the Government has withdrawn crucial support. The combination means our prediction is already becoming a reality for young people this winter.”

One of the survey respondents, Mitak, was forced to leave his aunt’s house at 17 as it was not safe for him. Before ending up in the care system, he had no choice but to sleep rough on the streets for several nights.

In the last 12 months two in five 18-34-year-olds have worried they may not be able to buy food, while 35 percent have feared not being able to keep a roof over their heads, said the study. And almost one third of people surveyed have noticed more homeless people on the streets this year.